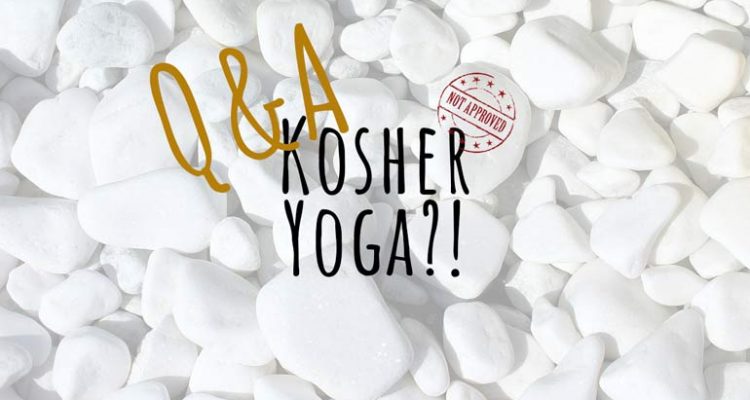 Questions and Answers about Harav Ginsburgh's position on Yoga

We have seen a strong reaction (both positive and negative) in response to Rav Ginsburgh’s position on yoga. We believe this is a positive thing. It shows that people have a passion and desire for something meaningful, mystical, healthy and holistic in their lives, proof that the search for spiritual meaning is alive and well.

That said, it is all the more urgent that a truly kosher form of mindful exercise be developed, one where every aspect of its thought, speech and action can be utilized to create a spirit and body. As mentioned in the original article, Rav Ginsburgh has in the past made some progress in this direction, but more work needs to be done to complete and publicize such a form of exercise.

The Gal Einai editorial staff has consulted with Rav Ginsburgh to provide the following information and elaboration that will hopefully help address some of the issues and questions raised by the original article.

Question: Why is it an issue that the term “yoga” is in Sanskrit or that the poses are called by their Sanskrit names? How is Sanskrit different from any other language?

Answer: Unlike other languages, Sanskrit is considered a sacred language and is the language of Hindusim that is used in all religious practice. It is specifically the use of the language that has an impact, as opposed to just the meaning of the words themselves (which is why yoga poses are generally called by their Sanskirt names and yoga itself is a Sanskrit word.)

As explained (The Magic of Sanskrit: Yogi Times): “What may often be overlooked, however, is the importance of the particular sound vibrations used, for it is not merely the act of chanting but more importantly the use of Sanskrit that produces profound change within people. In fact, vedic literature declares that Sanskrit chanting is an extremely enjoyable, powerful way for people to transform and awaken, a magical vehicle for accessing higher states of consciousness.”

The site continues to explain: “There is a mythological story about the derivation of Sanskrit that deserves mention. According to this account, Lord Brahma (the creative force of the Divine) spoke vedic knowledge in Sanskrit to the devas (higher beings) who in turn passed the information on from the heavenly spheres to mystics who were deep in meditation, living in a pristine state and attuned to subtle energies. Thus Sanskrit is a ‘heard’ language and referred to as devanagari from ‘deva’ meaning ‘god’ and “nagari” meaning ‘city,’ and translated as ‘the language of the gods.’ The holy seers recorded all of the vedic texts in Sanskrit, much like early European spiritual texts were written in Latin, with priests serving as the keepers of Sanskrit. Like Latin, Sanskrit was not a spoken language, but rather a language in which prayers and mantras were written and chanted.”

Q: The yoga classes I go to often begin with a mantra in Sanskrit. I don’t understand what is being said, but I don’t say anything when it is being chanted. As long as I am not saying the words, why would there be a problem with me being there?

A. Many types of yoga practice begin with a mantra in Sanskrit which is a foundational aspect of the yoga class. For example, Ashtanga yoga’s mantra, which is traditionally chanted at the beginning of each class, starts with: “Om” which is considered the “word of god” and “is a mystic syllable, considered the most sacred mantra in Hinduism and Tibetan Buddhism,” (gaia.com). The mantra continues: “I worship the Guru’s lotus feet….”

There is no question that chanting the above mantra is fundamentally problematic for a Jew. But the atmosphere we are around also affects us. Being in a class where this is being chanted and heard does impact us, subconsciously if not consciously. That is why we go to great lengths to ensure that we not only abstain from spiritually problematic behaviors but that we also are careful to separate ourselves from such environments.

If anything, one of the hopes and goals of the chants being used in a yoga class is specifically to impact the participants, whether or not those participants are saying or even actively listening to the chants or words themselves. As the same article continues: “For yogis, what may be most interesting is that Sanskrit has the ability to actually create healing through its vibration, since Sanskrit mantras directly affect the chakras, organs and nervous system. Although it is certainly important to understand the meaning of chants, their power lies mostly in the actual sounds themselves, that mystically allow blessings to manifest around and within us. By working with Sanskrit chants, we erase ill karma, cleanse our minds and emotions of negative patterns, and create new, positive conditions. Repeated use of Sanskrit chants liberates us from the material world, so that we may eventually escape the cycle of reincarnation.”

Q: My yoga class doesn’t have any spiritual or religious dimensions. There is no chanting, gongs or buddhas or the like in my class. It is solely about a physical exercise, so what could possibly be problematic? Some people even say that yoga is not really connected to Hinduism but a modern day invention. And even if it was originally, westernized modern yoga is about movement and flexibility and nothing more.

A: There are definitely yoga practitioners that claim to completely separate the yoga they teach from anything spiritual. However, there are many dedicated yogis who will say that such a thing is impossible, as to be authentic yoga, it is a spiritual and religious exercise. “The essence of yoga is to reach oneness with god,” (Pattabhi Jois: an Indian yoga teacher and Sanskrit scholar who developed and popularized the vinyāsa style of yoga referred to as Ashtanga Yoga.)

“Most Hindu texts discuss yoga as a practice to control the senses and ultimately, the mind. The most famous is the Bhagavad Gita (dating back to 6th-3rd Century BCE), in which Krishna speaks of four types of yoga – bhakti, or devotion; jnana, or knowledge; karma, or action; and dhyana, or concentration (often referred to as raja yoga, though not all sources agree on the term) – as paths to achieve moksha, the ultimate goal according to Hindu understanding. Of the four, the description of dhyana yoga has the most in common with yoga as it is largely understood today,” (Yoga Beyond Asana: Hindu Thought in Practice, hafsite.org).

A typical yoga class (including the ones that claim to have no religious or spiritual connection) will include poses and movements that in and of themselves are problematic. As stated above, the fact that one may not actively think or connect what is being said or done to its source, does not take away from the fact that the source is still very present and affecting the person.

For example, the “warm up” of stretches in most yoga classes are referred to as the “Sun Salutations: Surya Namaskara.” This is also often the first yoga sequence a new student of yoga will learn. Clearly that term, even if only used in the English and not the Sanskrit, already conjures up a spiritual meaning and worship. While every type of workout is going to have a series of warm up exercises and stretches, the sequence that is done through these Sun Salutations is very specific and carries meaning.

As explained: “…One of the means of honoring the sun is through the dynamic asana sequence Surya Namaskar (better known as Sun Salutation). The Sanskrit word Namaskar stems from namas, which means “to bow to” or “to adore.” The familiar phrase we use to close our yoga classes, namaste—te means “you”—also comes from this root. The essence of its meaning is “the divine in me honors the divine in you.” Each Sun Salutation begins and ends with the joined-hands mudra (gesture) touched to the heart. This placement is no accident; only the heart can know the truth. Surya Namaskar, or sun salutation, is included in a regular morning ritual of prayer and worship. It is the prayer of Lord Surya, the god of health,” (shantiyoganola.com).

Another example is the way almost any yoga class ends, which is in Corpse Pose, Savasana. "Corpse pose is the practice of the ultimate surrender of dying. This pose comes form the archetype of Shiva, the very first yogi, who is the god of destruction and letting go." (pranamarvillas.com)."

As the original article explains, the issues with a yoga class exist throughout, which is why the concept of “kosher yoga” is a contradiction in terms. Whether intentional or unintentional, conscious or subconscious, the sequence of the movements, the movements themselves, the name of the poses, and calling the entire process “yoga” carries with it problematic religious meaning, connection and significance. The Kabbalistic term for this is “makif d’tumah” which is the “atmosphere of impurity.” When something is impure it affects all that comes into contact with it.

Q: If Yoga is so problematic, why is it being taught at my Chabad House and local Jewish Community Center?

A: The fact that yoga is so widespread in the Jewish world was the impetus for publishing the original response. There is a lot of misunderstanding about the origins of yoga and arguments that it is really not related to Hinduism and therefore not problematic. Because there have been versions that are seemingly missing the obvious issues, many feel it is fine to teach or attend such classes. As this piece addresses, there are fundamental and foundational problems though that still exist, and therefore people need to do educate themselves to understand why yoga is so problematic.

The most obvious reason that it is being offered in so many places is because people are seeking it and enjoy it. There are an incredible amount of benefits that people ascribe to yoga. But as Jews, we must ensure that our diet not just be “healthy” but it must be kosher as well. We may love a certain food or restaurant, but if we value the concept of kosher and believe that a kosher diet is what is spiritually necessary, we would only eat there with rabbinical supervision and approval. Even if it tastes good. Even if it makes us feel good. Even if there is no other place that offers such delicious food.

It is not easy to tell someone that something they enjoy and love doing is not spiritually healthy for them. However, that is the case with yoga. And unfortunately, as of yet, there is no quick or easy replacement for that. But that doesn’t mean there can’t be. If anything, the fact that so many people are seeking yoga as a practice of mind, body and soul shows the urgency for the creation of a truly kosher form of movement to be further expanded and developed. Gal Einai and Rav Ginsburgh are working actively towards this goal. In the meantime, it is imperative that the spiritual dangers associated with yoga be shared with others so that they can become aware and educated regarding this matter. 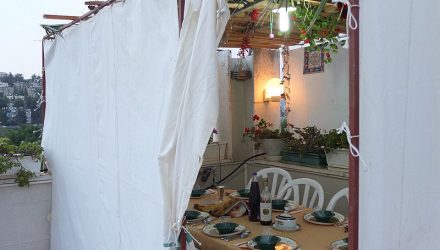