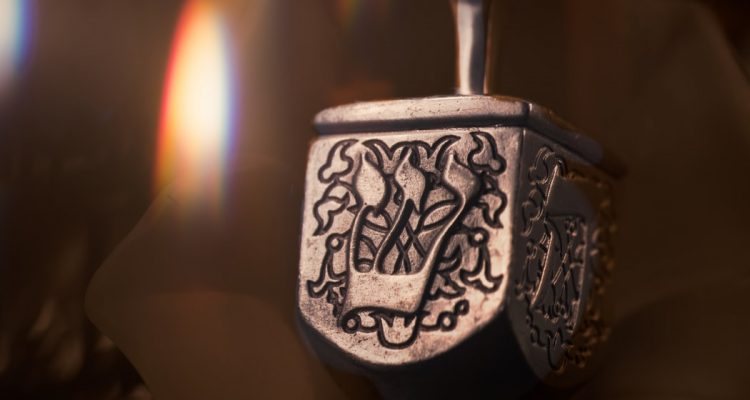 Rebbe Mordechai Twersky of Chernobyl  was the son of Rebbe Menachem Nachum of Chernobyl. While his illustrious father lived in poverty, Rebbe Mordechai served God with great wealth. He even demanded large sums of money from his wealthy chassidim. Rebbe Mordechai had 8 sons, all of whom became Chassidic rebbes. He passed away on 20 Iyar, 5597 (1837) and was buried in Anatevka, Ukraine.

Rebbe Mordechai had a special Chanukah custom. Every year, one of his wealthy chassidim would invite him to his home to light the Chanukah candles – a privilege for which Rebbe Mordechai would charge a grand sum of money.

One of Rebbe Mordechai’s wealthy chassidim was as stingy as he was rich. He never invited Rebbe Mordechai to light the Chanukah candles at his home. He didn’t want to pay the sum that the Rebbe would require of him and he also didn’t want to deal with the mess and possible damage to his fine apartment, which would be the sure result of the Rebbe’s visit with all his chassidim in tow.

One Chanukah, Rebbe Mordechai came to this chassid’s town. The chassid tried to avoid his Rebbe, but ultimately he met him. Of course, he had to reluctantly invite him to light the Chanukah candles at his home. To his great relief, Rebbe Mordechai told the chassid that the honor would cost him only one thousand rubles – significantly less than what he could have requested.

The chassid readily agreed and invited Rebbe Mordechai to join him in his carriage for the trip to his home. But when Rebbe Mordechai heard that the house was so far away that it required travel, he turned to his chassid and said, “This journey to your home was not included in the original price. If we have to travel, it will cost another thousand rubles.” The chassid had no choice. The two climbed into the carriage, Rebbe Mordechai’s entourage of chassidim followed, and they set out.

When they arrived at the chassid’s home, Rebbe Mordechai saw that his apartment was on the second or third floor of the building. “I didn’t realize that you lived on a high floor,” said Rebbe Mordechai. “Every step will cost another thousand rubles.”

The dejected chassid ascended the steps with Rebbe Mordechai and his entire entourage of chassidim, counting together with them the tens of steps that led to his apartment. Just as the chassid feared, the happy group was not very concerned with the immaculate order in the house. The frustrated chassid sat in his chair, watching the chassidim trampling his carpets with their muddy boots, thinking about the tens of thousands of rubles that he now owed the Rebbe. The Rebbe approached his chassid with a document and asked him to sign: “This says that you are transferring all of your assets to me,” Rebbe Mordechai explained. The chassid signed with a barely audible sigh, Rebbe Mordechai proceeded to the candle-lighting and afterward asked the chassid to accompany him outside.

“You should know,” Rebbe Mordechai said to the chassid, “that until now, all of your money and assets were impure. Money is impure when it is acquired in forbidden ways. It could be profiting from a business that does not keep the Shabbat, negotiations that are not in good-faith, profits from taking cheap labor instead of employing your fellow Jews and the like. The impure money in your possession was the cause of your great stinginess. When impure money is in our hands, it is very hard to detach from it and use it to perform acts of loving-kindness. Now that you have transferred all of your assets to me, they have been purified. I am returning it all to you, except for the first one thousand rubles. I hope that from now on, you will safeguard the purity of your money.”

From that day on, the chassid was very meticulous about the purity of his business transactions and became a philanthropist.

This story teaches us that an impure source of money distorts our proper approach to our possessions and livelihood and causes stinginess. Impure money comes from forbidden profits (such as fraud, interest, working on Shabbat, etc.) or from improper considerations (such as not taking the opportunity to fulfill the commandment that, “your brother shall live with you,” ensuring that Jews have work and, “buy from your colleague,” as well as giving livelihood to enemies of the Jewish nation instead of to our friends and allies). When the source of our money is impure, instead of understanding that the money that God gives us is a deposit that He has placed in our hands so that we can do good in this world, we can become addicted to it, see it as the ultimate purpose instead of a means to an end – and have a hard time parting with it.

This is how the fourth Lubavitcher Rebbe, the Rebbe Maharash, explained the teaching of the sages, “A commoner is prohibited from eating meat.” The word “prohibited” can also mean “bound.” The sages saying then becomes, “A commoner is bound to eating meat,” meaning that he is or will become addicted to it. From an addictive state, one cannot free the holy sparks which themselves are bound in the meat (or whatever else one is addicted to). Instead of the meat being on his plate, he is, so to speak, on the meat’s plate.

In our story, as well, the stingy chassid was addicted and bound to the vast sums of money that he had acquired through forbidden means. Instead of controlling his wealth and using it properly, his wealth controlled him.

A person’s money is part of the lofty surrounding soul level of the yechidah (the singular one). When our approach to money is defective, our lust for wealth is tantamount to idol worship. In order to purify the money, we have to reach a level of self-sacrifice depicted by the words, “with all of your might.” This level of self-sacrifice also comes from the soul level of yechidah, as the sages explained that, “with all of your might” means, “with all your money.” (This also rectifies those people for whom, “money is more dear to them than their own bodies”).

“There is no man who does not have his hour (sha’ah, which also means “turn”). When the proper time comes, the miser’s heart opens—even against his will—and he becomes part of the fulfillment of the statement, “Open for Me an opening the size of the point of a needle (one thousand rubles) and I will open for you an opening the size of a large hall (all the money he owns). It is specifically the power of the Rebbe and tzaddik to actualize, “And Joseph gathered all the money”—to gather all the fallen longings (kisufim, the same root as kesef, ‘money’), rectify them and elevate them to God.

Photo by Robert Zunikoff on Unsplash