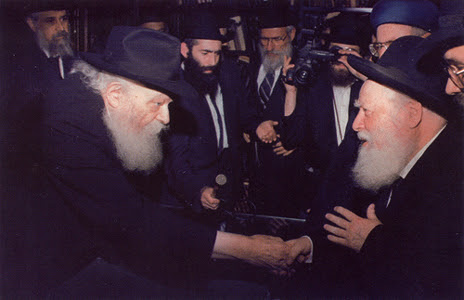 For Gimmel Tamuz: Three Stories About the Lubavitcher Rebbe

In honor of Gimmel Tamuz this Shabbat, let us contemplate three short stories about the Rebbe from three different periods.

Silent for One and Speaking for Another

Our first story took place in the period that the Rebbe – still called the Rama”sh (Rabbi Menachem Schneersohn) – was serving as the right-hand-man of his father-in-law, the previous Lubavitcher Rebbe, Rabbi Yosef Yitzchak Schneersohn:

In 5707 (1947) the Rebbe traveled to Paris to greet his mother, who had managed to leave Russia. He invited three of the Lubavitcher Chassidim who were in Paris at the time – Rabbi Nachum Shemaryah Shashunkin, Rabbi Ben Tzion Shemtov, and Rabbi Zalman Sodkevitch (who told this story) to come to see him. Each of the three had personal issues to discuss with the Rebbe. The Rebbe first began speaking with Rabbi Shashunkin, while Rabbi Zalman felt an overwhelming urge to doze off. Afterward, the Rebbe turned to speak with him and suddenly, he was clear-headed and completely alert, while he noticed that the other two Chassidim were sleeping. When it came time for the Rebbe to speak with Rabbi Shemtov, the other two fell soundly asleep…

This story wonderfully epitomizes the Ba’al Shem Tov’s explanation of the secret of Chashmal: that a true tzaddik can be silent (chash) for those people to whom his words are not directed and simultaneously speak (mal) with others. In this story, we see that even before the Rebbe officially became the Rebbe, he was already empowered with the secret of Chashmal.

From this we can also conclude that the Rebbe was also empowered with the second explanation of the Ba’al Shem Tov for the secret of Chashmal – the secret of the process of submission, separation and sweetening (chash-mal-mal) – and to posit that this is why the Rebbe invited these three Chassidim, to parallel chash-mal-mal: To one of the Chassidim the Rebbe spoke words of submission ( chash), to the second, words of separation (mal) and to the third, words of sweetening (mal) – to each according to his own soul root and the rectification that he needed in general, and in particular, at the time of their conversation.

The Rebbe and Those Who Come With Him

This story took place in the first year that the Rebbe had already assumed the mantle of leadership after his father-in-law’s passing. At the time, he was still performing wedding ceremonies.

An engaged couple asked the Rebbe to perform their wedding ceremony. The Rebbe asked the bride if she was planning to cover her hair with a wig. The bride answered that she was planning to cover hair with a headscarf (tichel). Despite the Rebbe’s words that a headscarf can sometimes slide back or even fall off the head so that it is preferable to wear a wig, the bride remained firm – and the Rebbe said that if that is the case, he could not perform the wedding ceremony. On the morning of the wedding, the groom came to the Rebbe’s headquarters at 770 and told the Rebbe that the bride had accepted upon herself to wear a wig and in light of her decision, they once again request the Rebbe to perform their wedding ceremony. The Rebbe answered that it was too late. “But the wedding is still hours away,” the surprised groom wondered. “Certainly your intention is not for me alone to come, but rather that I will be accompanied by that which comes with me. And for that, it is already too late…,” the Rebbe replied.

In this story, we see how the Rebbe saw himself.  Clearly, the groom wanted the Rebbe’s presence at the wedding. The groom was not consciously aware of, “that which comes with the Rebbe.” Actually, this was a phrase the Rebbe often used to refer to his connection with his departed father-in-law, the Previous Rebbe. The Rebbe used this phrase in the first period following the passing of his father-in-law and explained once: “In truth, it matters not to whom he [the previous Rebbe] is connected himself. We are connected to him and for us, there is nothing higher than that.” The Rebbe emphasized – particularly in the year before he accepted the mantle of leadership upon himself (5710, or 1950) and in the first year of his being a Rebbe – that he was nothing more than a connection to his father-in-law, the “the Nassi (leader) of our generation.” He saw himself as nothing at all, and that he is mainly, “that which comes with [him].” The Rebbe –unsuccessfully- tried to impress this upon his followers, the chassidim, while at the same time not surrendering his own assertiveness and firm approach on various issues, for example, on wearing a wig as a head-covering, a topic that came to be known as, “one of the Rebbe’s issues.”

The Rebbe’s Chassid: With all Powers of the Soul

The third story took place many years later, after the Rebbe’s unique leadership capabilities were already clear to all, through his mivtzo’im (mitzvah campaigns), the public struggles that he took upon himself, and his focus on the redemption and Mashiach, as we will see in the following story:

Rabbi Chaim Hakohen Gutnick, o.b.m., former head of the Beit Din of Melbourne, once asked the Rebbe if he should change his British-style rabbinical hat to a regular Chabad-style hat so that he would look like a chassid. The Rebbe answered: True, one of the Chabad Rebbes expressed that he was jealous of the garments of the chassidim of Poland, but if they would show him a chassid from the previous generations, he would be able to immediately know if he was a chassid of the Alter Rebbe, the Mittler Rebbe or the Tzemach Tzedek. Not according to his apparel, but according to the matter to which he enthusiastically devotes himself  (in Yiddish, koch zich).

The Rebbe continued: My chassidim are enthusiastically devoted to three things: A. Mivtzo’im (campaigns) that include the three pillars upon which the world stands. Implementing them strengthens the world. B. Jewish pride (the Rebbe spoke at length about the “Who is a Jew?” issue, but on a simple level this also includes the struggle for the entire land of Israel). C. “To live Mashiach” – every thought, speech, and action are focused on “bringing the Days of Mashiach.”

The three items that the Rebbe stated encompass all the levels of the chassid’s soul.

The mivtzo’im parallel the powers of implementation and action in the soul – the behavioral powers of the soul, associated with the sefirot of victory, acknowledgment, and foundation (netzach, hod, and yesod). The initiative for implementation comes from victory, which combined with submission to or acknowledgment of the Rebbe’s instructions transforms every chassid into a pious individual, who is described as, “a foundation of the world”; it is the pious, the tzaddikim, who sustain reality, as in the Rebbe’s words that the mivtzo’im strengthen the world’s existence.

Jewish pride begins with an individual sense of personal lowliness, which is then complemented by the positive pride shared by the members of an elite military unit. In all, Jewish pride builds upon the faculties of the heart. The public struggles that the Rebbe took upon himself derived from the depths of his heart and touched upon areas that were especially dear to him. This is the level of the emotive powers of the soul, the sefirot of lovingkindness, might, and beauty (chessed, gevurah, and tiferet). In short, the boundless love of Israel stemming from loving-kindness (on the right axis) brings about the firmness of might (from the left axis) when steadfastness is needed in the struggles; the two are then balanced by the sefirah of beauty (of the middle axis).

The main innovation found in the Rebbe’s teachings is that the redemption and Mashiach are the essential points of the service of the Chabad intellect throughout the generations. The Rebbe revealed in a letter that consciousness of the redemption and Mashiach had accompanied him from his earliest years when he attended cheider and even earlier. From that point on, he longed for the redemption and contemplated on how when it would come about, it would become possible to apply the verse, “I thank You, God, for being angry with me” to all the tribulations of the exile as an ultimate consolation. This Chabad consciousness focuses the chassid and permeates all his thoughts, speech and action with the ultimate purpose of Creation – the coming of Mashiach. This issue is related to the intellect and the intellectual sefirot in the soul: wisdom, understanding, and knowledge (chochmah, binah, and da’at). Wisdom, which is described in the Zohar as a “penetrating point” turns the chassid into someone firmly permeated with the point of Mashiach and the redemption; the fire of understanding keeps his thoughts constantly brewing; and, knowledge focuses and concentrates the mind on the issue.