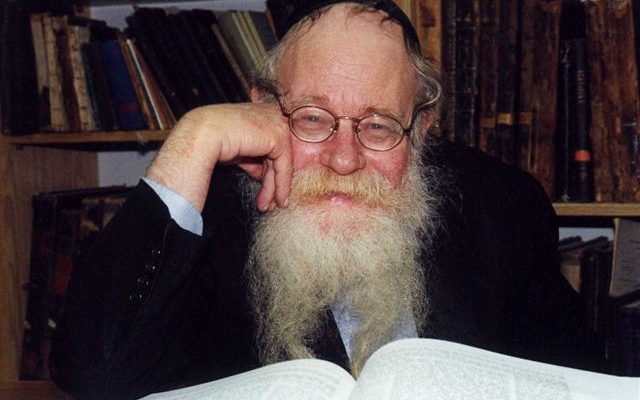 Rabbi Adin Even Yisrael (Steinzaltz) was born on 3 Av 5697 (1937) to Avraham Moshe Steinzaltz, a descendant of the first Rebbe of Slonim, and Rivkah Leah Krokovitz, a descendant of Rabbi Yitzchak of Vurka (Warka, Poland). When he was a teenager, Rabbi Adin became a ba’al teshuvah, guided by Rabbi Shmuel Elazar Halperin. He learned under the tutelage of Rabbi Nachum Shemaryahu Shashunkin and Rabbi Dov Ber Eliezarov in Jerusalem. At the age of sixteen, he began to study mathematics and physics at the Hebrew University in Jerusalem and was their youngest student. Parallel to his academic studies, he learned in Yeshivat Tomchei Temimim in Lod under the spiritual influence of the well-known Lubavitch mashpia Rabbi Shlomo Chaim Kesselman. He also studied in Yeshivat Torat Emet and in the Mirrer Yeshivah.

At the age of 24, Rabbi Steinzaltz was appointed as the principal of a religious public high school in Beit Hagadi. During that same year, he was offered the position of Chief Rabbi of Holon, but refused. At the age of 28, he started his major project of the Talmud with his linear translation and commentary. In 5725 (1965) Rabbi Steinzaltz married Chaya Sarah, the daughter of Rabbi Chaim Hillel Azimov. They had a daughter and two sons. In 5751 (1991) Rabbi Steinzaltz changed his last name to Even Yisrael, upon the recommendation of the Lubavitcher Rebbe. He authored over 400 books covering every aspect of Torah including Chassidut, but is best known for his translation and commentary of the entire Babylonian Talmud.

Rabbi Adin Even Yisrael Steinzaltz passed away on 17 Av, 5780. He was buried in the Chabad section on Mount Olives.

One of Rabbi Even Yisrael’s students related:

During one of her pregnancies, my wife, who has juvenile diabetes, was suffering from drastic, dangerous, and uncontrolled drops in her blood sugar levels. One Friday night, I met Rabbi Adin in the synagogue.

“How are things going?” he asked.

“Not good at all,” I replied and embarked on an enumeration of the difficult situation.

Rabbi Adin asked about the doctors, and I answered that we had already tried everything. He lowered his eyes, waited a bit, looked at me with penetrating eyes, and asked:

“And are you praying?”

Truthfully, his question irritated me: “Do you really believe that prayer can do something?” I responded. “Will these words truly balance her sugar?”

Rabbi Adin turned red and said to me: “Look, if you don’t believe in the power of prayer, then the only solution is for God to push you against the wall. He will pressure you and cause you pain until ultimately, not only will you pray, but you will shout. And then He will answer….”

Rabbi Adin’s answer made me feel very pressured, and even a bit insulted. I began to sob uncontrollably, and he looked at me with compassion, blessed me with “Shabbat Shalom” and I went home. The Shabbat passed and amazingly, from that day on through the end of the pregnancy, my wife didn’t even have one significant glycemic drop. In other words, we were saved!

As a skeptical chassid, I waited until the end of the pregnancy to tell Rabbi Adin. One of the days after the birth, I approached him and with chutzpah mixed with humor I said to him, “I always knew that the Rav is a Torah scholar, but I didn’t know that he was also a Baba (miracle worker)… The Rav performed a miracle! The pregnancy continued uneventfully!”

Rabbi Adin was very happy to hear the good news, but then added a sentence that to me is immortal: “Look, I don’t know if I’m a Baba whose prayers are more accepted than the next person’s. I actually think that something completely different took place. When you tell a friend your trouble from the depths of your heart, from the point of your pain—God hears. This is the explicit meaning of the verse: ‘Then the people who feared God spoke to each other, and God listened, and He heard.’[1] You spoke from the depths of your heart with a good friend, and God heard.”

When we go to a rabbi or a tzaddik and unfold our troubles before him, we generally expect a solution, a wondrous piece of advice or a heavenly blessing. Many tzaddikim and chassidim do relate in this way, but Rabbi Adin did not. Although he did attempt to direct his student in the direction of prayer, he later explained that it was specifically his tears and the honest, heartfelt conversation between “friends” that brought salvation down, with no help at all from him. How does God also listen to someone who has despaired of prayer?

Every Jew has a part of God above in him,[2] and loving one’s fellow Jew is an essential part of loving God. Thus, even day-to-day dialogue between friends harbors a form of prayer, and when we meet a fellow Jew, we are also meeting our Father in Heaven. An even more extreme example of this can be found in Isaiah, when the prophet turns to Jerusalem to comfort her, he says, “The labor of Egypt, and the merchandise of Ethiopia, and of the Sabeans, men of stature, shall come over to you, and they shall be yours; they shall go after you, in chains they shall come over; and they shall bow before you, they shall supplicate you: ‘Indeed, God is in you, and there is none else, other than God.’”[3] The Malbim explains: “Even though man should not pray to another man—only to God—they will consider you an intermediary between them and God, so much so, that they will supplicate you.” This parallels how the angels will say “holy” before the tzaddikim (“And Your people are all tzaddikim”[4]). The nations of the world will pray when they recognize that, “indeed, God is in you.” Every Jew has God’s Name, Kel, within and it can be addressed either through conversation (for Jews) or through prayer (by non-Jews). And so, if the heart is closed and has despaired because of its troubles, it is specifically another person who can open it and even cause God to listen.

Turning to a tzaddik or friend can include a request for advice, and it can simply mean sharing one’s burden. There is also another option, completely focused on the meeting itself. It is told of Rabbi Chanoch Henich of Alesk (Oles’ko, Ukraine) that a very ill person came to him to request that he pray for him. The tzaddik, did not receive him, but directed him instead to remain in his Chassidic court for Shabbat. On Shabbat eve, Rabbi Chanoch Henich led the prayers when he suddenly turned around and looked in the face of the ill person. As soon as the Rabbi looked at him, he completely healed. Later Rabbi Chanoch Henich explained that there are souls whose entire rectification is to see the face of a tzaddik. They become ill so that they will go to seek out the tzaddik. After they arrive and see his face, there is no more reason for the illness, and it can pass.

These three types of meetings parallel the Ba’al Shem Tov’s fundamental model of chash-mal-mal (חש מל מל).[5] The meeting of souls with Rabbi Chanoch Henich of Alesk is the secret of chash, corresponding to a state of silence. Pouring out one’s heart before a tzaddik represents the first mal, corresponding to the act of circumcision (of the heart), when the tzaddik hears and removes the outer shell of the speaker’s heart, opening the way for God to listen. Granting advice and giving a blessing represent the second mal, corresponding to speech and in this case the healing and inspiring words and speech spoken by the tzaddik. One way or another, when two Jews truly connect, the Shechinah will always appear between them.