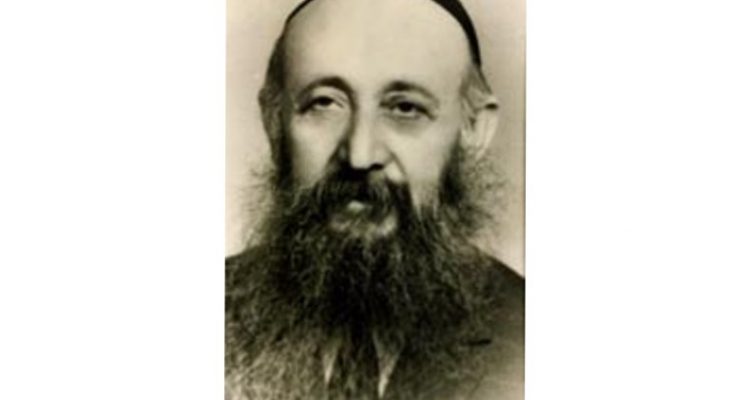 Rabbi Aharon Yechiel Hopstein of Kuzhnitz (Reb Ahraleh Kuzhnitzer) was born in 5651 (1891), the sixth generation, son after son, to the famous Maggid of Kuzhnitz. Besides stories of his complete immersion in the service of God and the miracles that he worked, Reb Ahraleh was also famous for his wondrous, unusual behavior and his ability to bring non-observant Jews to religious observance. Reb Ahraleh passed away on the third of Tishrei, 5703 (1943) in the Zelikhov ghetto. Unusual for those times of horror, he merited a large funeral.

An active participant in the following story was Rabbi Avraham Eliyahu Kitov (Mokotovsky). He was born in 5672 (1912) in Poland to parents who were chassidim of Reb Tzadok Hacohen of Lublin. He learned and taught Torah in Warsaw, including in schools that were not religiously observant, and was also active in public matters with Agudath Yisrael. After he married, he made aliyah to the Land of Israel where he taught and took an active role in public matters. Rabbi Kitov authored several books, the most famous of which is Sefer Hatoda’ah (The Book of our Heritage). He passed away on the 6th of Adar Alef 5736 (1976) and was buried in Har Hamenuchot in Jerusalem.

As a young boy Rabbi Eliyahu Kitov learned Torah in a shtiebel (synagogue) of the chassidic sect of Gur in Warsaw, one of the many Gur shtiebels in Warsaw at the time. One of the famous and important tzaddikim of that time was Rebbe Ahraleh of Kuzhnitz. He was known as the vilder rebbe (the wild rebbe) and his chassidim were known as wild chassidim.

A person should not be wild for no reason. In association with a rebbe or chassidim, the wildness can be good. It means that they can think and act out of the box with a lot of holy energy and enthusiasm for mitzvot and good deeds. Wildness can also be in the realm of thought. For example, if I think that I want to bring the Mashiach, and perhaps if we dance for five hours straight without stopping, Mashiach will come. This is a wild thought, lacking moderation. In Kuzhnitz at that time, they were wild. They acted for God in out-of-the-box ways.

Rabbi Kitov related that one Friday, just before Shabbat, the Kuzhnitzer entered the shtiebel where he learned. He pounded on the table and said that he needs two strong boys to accompany him on a mission. The yeshivah boys in Gur were a very orderly group. Every group had its own “commander.” The commander, who did not want to allow for a disturbance of the yeshivah boys’ Torah study, agreed for only one boy to accompany the Kuzhnitzer. The Rebbe promised that the boy would be back in time for the Kegavna prayer of Shabbat eve.

Rabbi Kitov was a strong young man. He joined the Kozhnitzer, who explained nothing. He took him by the arm and led him through the streets of Warsaw. They walked and walked and entered a part of the city where there were less observant Jews. Finally, they reached the entrance to a theatre—not exactly an appropriate place for a yeshivah boy and a rebbe. Rebbe Ahraleh often saved souls from those places—precious souls who he would then bring close to Torah and Judaism.

As they approached, Rebbe Ahraleh gave the young Eliyahu Kitov instructions: “I am going to point out a certain young Jewish man who is not religious. Approach him together with me. We will catch him and bring him out of here. I brought you along because you are strong and I can’t catch him by myself,” he explained. “And even if he shouts and protests,” Reb Aharaleh continued, “pay no attention. We will bring him out of here anyway.”

Soon, the young man did indeed turn up. Rebbe Ahraleh pointed him out and they both grabbed him and dragged him away. As expected, the young man began to shout and protest. “I paid for a ticket and because of you I will miss the show!” he howled. Despite the protests, the Rebbe and Eliyahu dragged him all the way to the Kuzhnitz shtiebel. With that, Eliyahu Kitov finished his mission and was back at his Gur shtiebel just in time for the Kegavna prayer, as the Rebbe had promised.

A few days later, the Kuzhnitzer once again came to the Gur shtiebel and asked for Eliyahu Kitov. This time he was not alone. With him was the boy from the theatre, dressed in full chassidic attire. The Rebbe said that he had done his job and now it was up to the yeshivah boys to continue to teach him and take him into the Gur Chassidut. The young man begged Reb Ahraleh not to leave him, but to no avail. “I know how to turn a non-Jew into a Jew,” Rebbe Ahraleh said. By me in the Kuzhnitz shtiebel, we are good at taking Jews out of places where they acted like non-Jews and bringing them back to Judaism. But to turn a Jew into a chassid? That is what they know how to do in Gur. So now that I have made him a Jew, you can continue the job.”

The Rebbe Pnai Menachem of Gur related that as a boy, he had seen that Jew among the chassidim who came to his father, the Imrei Emet and he seemed like an angel to him.

The idea of someone who knows how to turn a non-Jew into a Jew and others who know how to turn a Jew into a chassid is an important foundation in chassidut. These two stages are called the First Clarification (בֵּרוּר רִאשׁוֹן) and Second Clarification (בֵּרוּר שֵׁנִי). Clarification means rectification. There are people who are good at doing the first clarification—bringing a Jew in from the street—but they do not know how to do the second clarification—elevating and refining the person who they brought in. By contrast, there are people who are talented at the second clarification, but not so good at the first clarification. It is important for everyone to know his talent and for all to work together.

It is written[1] that all the sons of Jacob, and particularly Judah, were talented at the first clarification. After them, it was Joseph the Tzaddik who knew how to do the second clarification. The redemption depends upon connection and brotherhood between Jews. When all is done with love and a concerted effort, it brings added joy to the world.