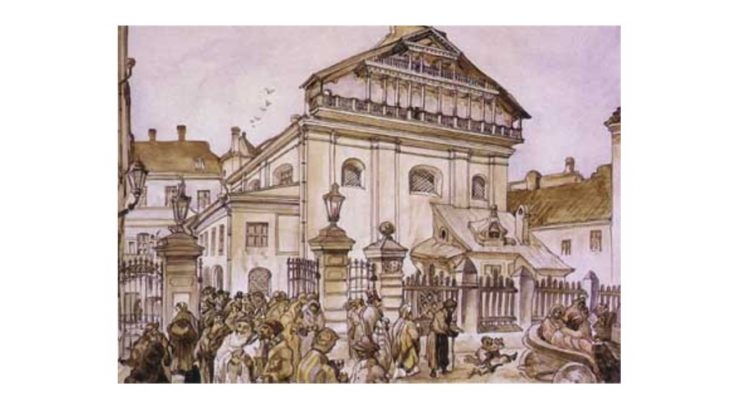 Rabbi Avraham be Avraham the Righteous Convert was born Valentin Potocki, a member of one of the most famous and powerful families of Polish nobility from the Vilna region.

During his studies in a Paris university, he was exposed to the truth of the Torah and decided to convert to Judaism. He converted in Amsterdam (one of the few places in Europe where it was legally possible to convert in those days). He changed his name to Avraham ben Avraham and insisted on returning to Poland, instead of remaining safely in Amsterdam. He preferred to openly flaunt his conversion to Judaism. In Poland, someone reported him to the Catholic church. He was arrested and openly admitted that he had converted. He rejected the promises of absolution, wealth, and honor that he would merit if he would return to his previous religion. Instead, he chose to die and sanctify God’s Name. On the second day of Shavu’ot 5509 (1749), Rabbi Abraham was burned at the stake, with the words “Shema Yisrael” on his lips. The Jewish community bribed the authorities and was able to bring Rabbi Avraham’s ashes to burial in the Jewish cemetery in Vilna. The Vilna Ga’on asked to be buried next to him.

After he was sentenced to be burned at the stake, a number of rabbis were allowed to visit Rabbi Avraham. They said to him that certainly, when he would go up to heaven, he would lobby for revenge over his enemies.

Rabbi Avraham replied with a parable: The son of the king received a toy palace from his father, the king. Once while playing with his toy palace, the son of the minister accidently broke the toy. Angry, the prince announced that when he would grow up and become king of the land, he would take revenge on him. “Do you think,” Rabbi Avraham turned to his guests, “that when the prince became king, he remembered what the son of the minister did when they were children? Likewise, do you think that when I ascend to my Father in Heaven and my soul will delight in the rays of the Divine Presence, I will remember what they did to me in this low world?”

From this story, we can understand that the concept of revenge is relevant to contracted (or immature) consciousness. When a person merits expanded consciousness and cleaves to God, the matters of the mundane world have no weight and revenge becomes irrelevant. The sages, however, said that “Great is revenge.”[1] Furthermore, the last action that Moses took before his passing was a war of revenge against Midian. How then, can we posit that revenge is contracted consciousness and childish?

Rabbi Avraham’s parable is true specifically with regard to personal revenge, which does stem from contracted consciousness, similar to small children who become angry over small things and threaten revenge. However, revenge that is a sanctification of God’s Name—such as God’s revenge exacted from the Midianites (who desecrated the sanctity of the Jewish people with promiscuity)  through Moses and the Israelite army—is very important and lofty. (Even in a case like this, there is small-mindedness in taking revenge and retribution, but it is considered a positive aspect of “smallness”). This is the type of revenge that the rabbis had in mind when they spoke with Rabbi Avraham about revenge. His will, however, was to be in a state of absolute expanded and mature consciousness.

The emotional ability to overcome the will for revenge over someone who has harmed me or even killed me stems from the attribute of loving-kindness. The righteous convert felt that soon, after his execution, he would merit lofty pleasure, the experience that in Chassidic thought is described as, “pleasurable love” (אַהֲבָה בַּתַּעֲנוּגִים). In Kabbalah, the level of pleasurable love [for God] that tzaddikim merit to experience is also called, “Four-hundred worlds of longing” (אַרְבַּע מֵאוֹת עָלְמֵי דְּכִסּוּפִין), which are alluded to in the Torah by the “four hundred measures of silver”[2] with which Abraham, the personification of loving-kindness and the father of all converts, bought the Cave of the Machpelah, a burial plot for Sarah and himself.

This deep experience of the nothingness of this world, replete with its temptations and troubles, as opposed to the wondrous Divine pleasure, is beautifully expressed in the liturgical poem Akdamot, which we recite on Shavu’ot, the day that Rabbi Avraham was burned at the stake. This liturgical poem, one of the most wondrous in Jewish literature, describes how the non-Jews attempt to entice the Jews to join them, promising them all the pleasures of the world. The Jews, however, ridicule these propositions and say that the good that Israel will merit is immeasurably greater and more wondrous and that all the troubles in the world, including the torture and massacre perpetrated by the non-Jewish world—are nothing by comparison. In his parable, Rabbi Avraham expressed the content of Akdamot.

The first person who merited to sense God’s infinite goodness was Abraham, the personification of loving-kindness. All the righteous converts who cleave to the God of Israel follow in his footsteps. A righteous convert has an inner sense of the future good, without which he would not have converted. True conversion takes place specifically when things are bad for the Jews. In eras when the Jews enjoy peace, conversion is even problematic according to Jewish law. The righteous convert joins a nation that is scorned and suffering as he recognizes the inner concealed good of the Torah of Israel. For him, all the troubles of this world are nothing but child’s play in comparison.