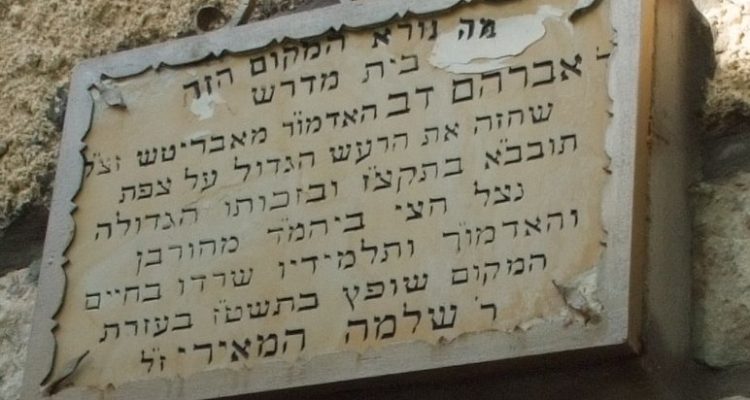 Rabbi Avraham Dov of Avritch: Love for the Land of Israel

Rabbi Avraham Dov was the rabbi of the cities Zhitomer and Avritch. In 5591 (1830) he made aliyah to the Land of Israel. His love of the Land is reflected in his book. When he arrived in Israel, Rabbi Avraham Dov settled in Tzfat, where he became the rabbi of the congregation of chassidim in the city. He remained in Tzfat until the end of his life, despite the immense hardships that he suffered there, which included the Arab riots of 5594 (1833) and of the Druze in 5598 (1837). On the 24th of Tevet 5597 (1836), a great earthquake shook Tzfat and its surroundings, causing many fatalities. At the time of the earthquake, Rabbi Avraham Dov was praying the afternoon services in his synagogue. When the building began to shake, he told the people praying there to lie on the floor around him. The quaking intensified and much of the synagogue collapsed. But the section where all the people had crowded around Rabbi Avraham Dov remained standing and they were all miraculously saved. In 5601 (1840) a plague broke out in Tzfat, killing many people. Rabbi Avraham Dov promised his community that he would be the final victim of the plague. On the 12th of Kislev 5601, he passed away, and the plague ended.

Thought is an internal power, action that we feel in our brain. Will, on the other hand, is an encompassing energy that can hover above a person’s consciousness without him feeling it. Only when the will strongly awakens, can its preeminence over the power of thought be felt. Then, the ‘run’ will not be able to sit enveloped in thought and it will lead him to take concrete actions that can actualize his will. Thus the Bat Ayin wrote: “As he strengthened himself on the way” – literally. As Rabbi Aharon of Zhitomer sensed, the Bat Ayin had an intense will to make aliyah to the Land of Israel. His will was so strong that it would necessarily transform into action. Thus, from the surrounding powers of his will, which had not yet been revealed even to him, the holiness of the Land of Israel was shining.

Rabbi Avraham Dov liked to participate in the feast of the third day after circumcision. Elijah the Prophet comes to the circumcision itself, he would say. But on the third day, the Holy One Blessed Be He comes, as he came to visit Abraham on the third day after his circumcision. Once, at a third-day post-circumcision feast, the tzaddik drank a bit more wine than usual and was in excellent spirits. Two people had to hold him up to take him home and he jokingly explained the saying of the sages that a bit of wine is satiating, but a large amount of wine drags a person to drink more wine. ("פורתא מסעד סעיד טובא מגרר גריר )   Laughingly he said of himself, “If a person drinks a bit of wine, he needs two people to help him walk. But if drinks a lot of wine, they have to drag him.”

A short time later, the circumcised baby began to bleed from his wound and was in danger. The parents immediately sent someone to rush to the holy rabbi so that he would pray for him. Rabbi Avraham Dov had already recovered from the wine and was steeped in his Torah study. When told about the baby he said, “Right now I was studying a law written by Maimonides and I saved him from the dissent of the Ra’avad. Maimonides came to thank me. In the merit of this deed, the baby will heal. And so it was.

To understand Rabbi Avraham Dov’s affinity for the third-day feast, let us go back to the first time that this third day took place. According to the sages, the story of the angels coming to visit Abraham and giving him the tidings of the future birth of Isaac happened on the third day after his circumcision. This is the day that the pain of the circumcision intensifies and God brought the sun out of its envelope so that travelers would not come and disturb Abraham while he was in pain. And what does Abraham do? He sat and waited for all of those ‘disturbing’ guests and when they finally came, he hosted them with all his heart.

Abraham was able to resolve this paradox because he was the first person to walk “before God.” As opposed to walking “with God,” which keeps in line with what is expected of us, when we walk “before God” we have to take responsibility, to get up before the break of dawn and to ‘lead’ as it were, the leader of the universe. This type of service requires great strength, overcoming our personal nature and the nature of the world. These energies manifest in a regular person when his life is in danger. Abraham strengthened himself like a lion and aroused those energies in himself for the purpose of serving the Creator. As a salute to his service, God turned to him and commanded him to seal that might on his flesh, for all generations to come.

Circumcision, the first commandment that pertains to a Jew’s body, infuses a person with the strength to overcome immense difficulty. Nonetheless, it is not potent enough to perpetuate this strength. Just as the Giving of the Torah shattered in the revelry of the Sin of the Golden Calf, so a spiritual acquisition can diffuse like smoke when it is not internalized and reinforced by its recipient. What is the cause (and the test of) this reinforcement?

Change is internalized only when it hurts. When we persistently choose the right thing to do despite the difficulty, when performing a mitzvah actually creates apparently unwanted results – and we hang on – then the lofty attribute that we previously acquired truly becomes a part of us.

When a person truly feels that he is a part of holiness, he will add more and more holiness– specifically from within painful circumstances.  A mitzvah brings another mitzvah in its wake and might brings more might in its wake. Rabbi Avraham Dov, who cleaved to the mitzvah of settling the Land of Israel despite all the difficulties, knew how to appreciate the greatness of the third day. Every person encounters difficult times. It is during those times that he can acquire his entire world and grow.