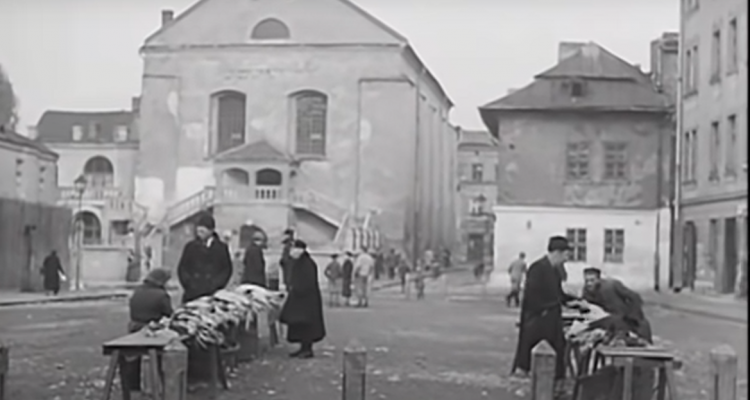 Rabbi Hillel Halevi of Paritch (Parwich) was born in the town of Khmilnyk in 5555 (1795), to his father Rabbi Meir, who was a Chernobyl chassid. In his childhood, Rabbi Hillel was already well-versed in the Talmud and Jewish law, learned books of Kabbalah, and prayed according to the intentions (kavanot) of the Arizal. It is no wonder that he was called, “the genius of Chemtz,” after the town in which he grew up. When he came across the Tanya, by the Alter Rebbe, he became an ardent chassid of Chabad. Despite all his efforts, however, he never managed to actually see the Alter Rebbe. In 5578 (1818), Rabbi Hillel was sent by the Mittler Rebbe [the second Lubavitcher Rebbe] to tens of farming settlements that the Rebbe had established in Kherson, “to sow spirituality and to reap materiality” for the needy. In this way, Rabbi Hillel became the spiritual teacher for tens of thousands of Jews whom he taught and supported. He dedicated his life to disseminating Torah and Chassidut and worked with self-sacrifice to provide kosher food for the Jewish soldiers who had been forcibly drafted into the Czar’s army. In 5600 (1840) he became the Rabbi of Paritch in White Russia, near Minsk and then became the Rabbi of the nearby city, Babruysk. Rabbi Hillel would write everything that he heard from the Rebbes and add his own explanation. He also composed deep, chassidic melodies. His words of Torah were compiled in the books, Pelach Harimon, Imrei No’am, and others. Rabbi Hillel merited a long life and was also a chassid of the third Lubavitcher Rebbe, the Tzemach Tzedek. He passed away on Shabbat, 11 Av, Shabbat Nahamu 5624 (1864), and is buried in Kherson.

On one of Rabbi Hillel’s journeys, he reached a place with very few Jews. Rabbi Hillel strongly desired to pray the evening prayers with the traditional quorum of ten Jews, as he traditionally did. He asked the Jewish innkeeper to gather all the Jews in the area. The innkeeper did his best, but only nine Jews—all the local Jews in the vicinity—came to the inn. “Are there no other Jews in the entire area?” Rabbi Hillel asked the innkeeper. The innkeeper remembered that a few miles away there was another Jew. The Jew, however, was assimilated, conducted himself like a non-Jew and was married to a non-Jewish woman. There was no chance that he would join the quorum.

“Please travel to enlist this Jew immediately,” Rabbi Hillel urged the locals. “Offer him exactly thirteen rubles to compensate him for his time. No more and no less.” The Jews made the trip to the man’s home. By the time they reached their destination, it was the middle of the night. They knocked on his door. The assimilated Jew angrily awoke and made his way to the door, cursing whomever it was that had woken him, on the way. When he saw the delegation of Jews and heard what they wanted, his curses turned even more virulent. “Go away!” he shouted at the people at his doorstep. The man’s wife awoke and asked him what the shouting was all about. When she heard that the delegation had offered her husband such a large sum, she rebuked him. “How foolish can you be? You wake up in the middle of every night just to earn a few coins, and now you have given up thirteen rubles?” Off went the assimilated Jew to be the tenth in the quorum.

The assimilated Jew sat at the side and did not pray. Rabbi Hillel led the prayers with his Divine melodies. The man just sat and listened but did not say anything. At the end, he asked who it was who had led the prayers. “Rabbi Hillel of Paritch,” the others answered. “He is a great tzaddik.” The Jew was amazed, because he remembered that when he was a child, the entire village went out to welcome Rabbi Hillel, for he was already a famous tzaddik at that time. This Jew went to talk to Rabbi Hillel after the prayers and spent two hours with him. Nobody heard what they were saying, but they did hear him crying. When he exited Rabbi Hillel’s room, the Jew travelled to a different city. He left his non-Jewish wife and returned to God. The entire search for a quorum had been for him.

In this story, Rabbi Hillel acts in a manner usually reserved for the greatest tzaddikim, who descend into the depth of the kelipot to redeem the sparks hidden there. The Tzemach Tzedek summed up Rabbi Hillel’s employment of the Divine service of tzaddikim in one sentence: “An action-taking tzaddik like him has not been in this world for the past three hundred years.”

Usually, when we speak about Rabbi Hillel of Paritch, the focus is on his service of the heart in prayer and character refinement. But despite the fact that Rabbi Hillel was an example and symbol of service of the heart, it is specifically through the actions that he took that he attained the level of tzaddik. There are many stories about how completing an action he had started was a guiding light for Rabbi Hillel.

In the soul, the action-oriented attributes are netzach (victory), hod (splendor), and yesod (foundation). Of these attributes, yesod is the most connected to the body and to action in physical reality, represented by the sefirah of malchut (kingdom). This is also the source of the ability of the tzaddik to rescue those who have fallen into the depths. Yesod is the sefirah most identified with the tzaddik—“The tzaddik is the yesod [foundation] of the world.” The righteousness of action is the primary type of righteousness, as the Lubavitcher Rebbe emphasized, “The main thing is the action, itself.” One of the primary characteristics of the tzaddik’s attribute of foundation is his absolute control over the body, particularly in sexual matters, but not exclusively:

Rabbi Hillel lived in a small, one-room house. The room was divided by a curtain. The family lived in the inner section, while Rabbi Hillel’s students would learn with him in the outer section. Rabbi Hillel’s bed was situated under the curtain, half in the family section and half in the students’ section.  One time, Rabbi Hillel’s students came to their regular class and saw that he was sleeping. “Shh shh,” they said to each other. “He is sleeping.” Rabbi Hillel immediately rose and said, “He is sleeping? Do you think that he [the body] is my master? When I tell him to sleep, he sleeps and when I tell him to rise, he rises!” Indeed, every afternoon, Rabbi Hillel would sleep for half an hour. He would fall asleep the moment that he rested his head on the pillow and would wake up immediately after half an hour.

Even when Rabbi Hillel was a young man, at the beginning of his path in Chabad, his greatness was already clear. Once, he stood in the corner of the study hall, praying. Rabbi Zalman Zezmir, one of the major Chabad mashpi’im and the person who introduced Rabbi Hillel to Chabad, was holding a farbrengen in the study hall. He pointed to Rabbi Hillel and said, “Look at the young man in the corner. He has already eroded his body so much so that he has no body,” meaning that his body does not interfere in his daily life.

Rabbi Hillel was deeply devoted to the customs he had adopted. In the following story, we will see how this self-sacrifice elevated another Jew to great heights:

Rabbi Hillel’s neighbor was a simple tailor. He was not much of a tzaddik, but he did have connections with the czar’s army, for he would sew special uniforms for some of the officers. When the tailor heard Rabbi Hillel’s cries, he entered his home immediately and bribed the officers present, promising them that if they would leave Rabbi Hillel’s home, he would sew beautiful new uniforms for each of them. When the soldiers left, Rabbi Hillel turned to his neighbor the tailor and said, “In the merit of your deed, I promise that you will be buried next to me after 120 years.”

Rabbi Hillel did not pass away in his own city, but rather in the distant city of Kherson, where he was buried. The tailor lived many years after Rabbi Hillel. At the end of his life, he went to visit his family near Kherson. He entered an inn and died suddenly. It was the middle of the winter and snow covered everything. The Burial Society took the anonymous traveler to the cemetery, found an empty place, and buried him there. Only in the spring, when the snow melted, did they see that they had buried him next to Rabbi Hillel of Paritch. All of those years, nobody had been buried next to him. The members of the Burial Society feared that it had been inappropriate to bury the traveler next to Rabbi Hillel. They sent a telegram to his village to ask about the identity of the anonymous traveler who had been buried next to Rabbi Hillel of Paritch. They received this story for an answer and understood that Rabbi Hillel’s promise to the tailor had finally been fulfilled.

The Ba’al Shem Tov’s Gift of a Dry Sukkah

The Ba’al Shem Tov requested something of his brother-in-law, Rabbi Gershon of Kitov, who fulfilled his request. “What can I give you in return for your favor?”

Rabbi Levi Yitzchak of Berditchev was born in 5500

The 18th of Elul is the birthday of the

Q: What is a soul