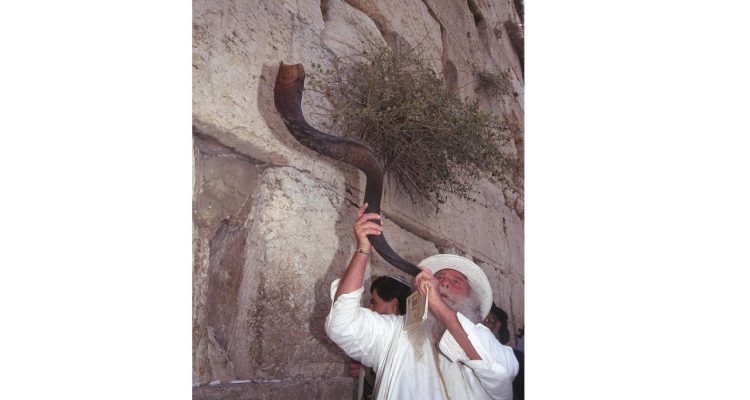 Rabbi Levi Yitzchak of Berditchev’s Connection to the Shofar

Rabbi Levi Yitzchak of Berditchev was born in 5500 (1740) to Rabbi Meir and Sara Sasha. After his wedding he journeyed to Mezritch to study under the Maggid of Mezritch, eventually becoming one of his preeminent disciples. Rabbi Levi Yitzchak served as rabbi in a number of cities and encountered opposition to Chassidut. After he was removed from his position in Pinsk due to the community’s opposition to Chassidut, he moved to Berditchev and established a chassidic court there. He was known for always defending the Jewish people as a whole and as individuals and highlighting their merits and came to be known as “the advocate of Israel.” His teachings were gathered in the book “Kedushat Levi.” Rabbi Levi Yitzchak passed away on the 25th of Tishrei 5570 and was buried in Berditchev. Out of admiration for their rabbi, the Berditchev community did not appoint a new rabbi after his death, and subsequent Jewish leaders there were called “Judge” or “Teacher.” According to some chassidic teachings, it is beneficial to say Rabbi Levi Yitzchak’s name prior to the shofar blowing on Rosh Hashanah, in order to highlight the merits of the Jewish people. There are many stories about the great influence that his shofar blowing had in Heaven.

One day a new candidate appeared before Rabbi Levi Yitzchak. He asked him what special kabbalistic intentions he employs when blowing the shofar.

The candidate replied, “Rabbi, I am a simple Jew and I do not know much about the hidden dimension of the Torah. But I do have four daughters of marriageable age and when I blow the shofar, I think the following: ‘Master of the universe! I am fulfilling Your will. I perform Your commandments and blow the shofar. Please do my will and help me marry off my daughters….’”

Rabbi Levi Yitzchak stood up and said, “You will blow the shofar in my congregation.”

The simple blast of the shofar splits into a number of different sounds. Let us explain the details of this shofar blowers’ simple intention: Four daughters are like the four movements in the Alter Rebbe’s famous Chassidic melody, Four Bavot. Each movement parallels one of the four worlds—Emanation, Creation, Formation, and Action—and corresponds to a different part of the shofar-blowing—teki’ah, shevarim, teru’ah, tekiyah.

When singing the melodious Four Bavot, the soul passes through the four worlds, one after the other. The climax of the melody brings on the pinnacle of cleaving to God and to real change in the soul. We can surmise that the same was true of this Jew’s shofar-blowing when along with blowing the shofar, certainly the image of his daughters came before him as well and the intentions of the shofar blowing intensified as his thoughts moved from daughter to daughter.

In Hebrew, “daughter” (בַּת) equals 402, so the numerical value of four “daughters” is 1608, which is also the sum of all 16 possible numerical combinations of the word “understanding” (בִּינָה), whose value is 67 (67 times 16 equals 1608). According to the intentions (kavanot) of the Arizal, the sefirah of understanding is the spiritual source from where the shofar’s effect comes. While the daughter figure generally symbolizes the sefirah of kingdom (malchut) while understanding symbolized the mother figure, here (and many other cases), the daughter is like the mother, because on Rosh Hashanah kingdom ascends to receive the intellectual faculties of understanding. Thus, even though the earnest candidate did not think of it, his thoughts about his four daughters and their needs reflected a beautiful kabbalistic intention and meditation on the mystical meaning of the shofar blasts.

In this story, as well, it is the power of women that stands behind the shofar. The tears in the women’s section of the synagogue help Rabbi Levi Yitzchak to blow the shofar in the men’s section below. This is the secret of the ascent of the woman to become the “crown of her husband” (Proverbs 12:4).

The gates of the women’s section, the gates of understanding, are also the gates of tears, which are never sealed shut. In Hebrew, “the gate of tear” (שַׁעַר דִּמְעָה) equals “the eternal/victory of Israel (נֶצַח יִשְׂרָאֵל), which is the only power by which the tzaddik overcomes the prosecution of the Satan. In addition, “women’s auxiliary” (עֶזְרַת נָשִׁים) itself equals “Satan” (שָׂטָן)  in the numerical method of calculation known as “run and return,” specifically: ש שט שטן טן ן. Thus, it is specifically the women in the women’s auxiliary that have been given the power to nullify the influence of Satan and make him retreat.

The Maggid of Mezritch did not blow the shofar himself. Instead, his disciple, Rebbe Menachem Mendel of Vitebsk would blow while the Maggid would announce the name of the coming shofar blast, as is customary. Even at the end of his life, when he suffered problems with his legs, he would announce the shofar blasts from his room. One time, Rebbe Menachem Mendel of Vitebsk was not in Mezritch on Rosh Hashanah. The Maggid directed Rabbi Levi Yitzchak of Berditchev to blow the shofar instead. Rabbi Levi Yitzchak prepared himself and approached the platform where he would blow the shofar with fear and awe and great tumult, as was his practice. When the Maggid called out the first shofar-blast, Rabbi Levi Yitzchak saw great lights and fainted. They were forced to call upon someone else to blow the shofar—someone who would not be stricken with fear and awe. After the prayer service, the Maggid said, “I don’t know what happened to him. After all, Mendel (Rabbi Menachem Mendel of Vitebsk) sees more than him and he is not afraid at all….”

The three heroes of our story, the Maggid and his two illustrious disciples—Rabbi Menachem Mendel of Vitebsk and Rabbi Levi Yitzchak—correspond to the three highest sefirot: crown (keter), wisdom (chochmah), and understanding (binah) and to the three worlds: primordial man, emanation, and creation (Adam Kadmon, atzilut, and beri’ah).

The Maggid was the crown on the heads of his disciples. Like the crown that hovers above, he does not blow the shofar himself. The crown does not act directly in the world. Instead, it directs those who have received light from it and they respond to it, naturally.

Rabbi Menachem Mendel parallels wisdom. As a wise man, he sees what is being born in the world. He sees the lights born of the shofar-blowing. His aliyah to the Land of Israel, whose very air promotes wisdom, relates to his Divine service on Rosh Hashanah. The Land of Israel is the “land in which God’s eyes are invested from the beginning of the year to the end of the year.” Among the senses, sight corresponds to wisdom. Thus, from the beginning of the year, the wise man sees what is going to be born.

Rabbi Levi Yitzchak’s connection to understanding—the mother principle—explains his sensitivity to women, who are identified with the sefirah of kingdom, which is referred to as the daughter. This also explains his particular connection to shofar-blowing. The intentions (kavanot) of the Arizal for the blowing of the shofar revolve around the justice and the might that it expresses and the ascent of the sefirah of kingdom, which receives the judgments from might. Rabbi Levi Yitzchak is a very might-oriented figure. But it is also this atmosphere of judgment and might in which he is immersed and by which he is threatened that motivates him to become the advocate for the people of Israel; he feels obligated to do his utmost to ensure that they emerge with merits from the judgments of Rosh Hashanah for the entire year.

Parshat Naso: The Flow of Para...