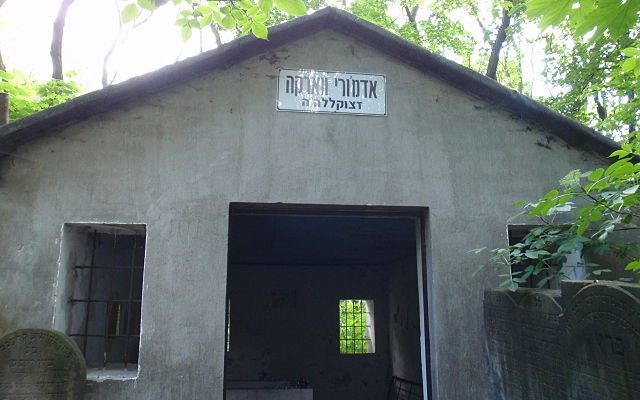 Rabbi Menachem Mendel of Worky: Lean on Me

After the Rebbe of Worky passed away, his two righteous sons became Chassidic Rebbes. The elder son, Rabbi Yaakov David, became the Rebbe of Amshinov and his younger brother, Rabbi Menachem Mendel, eventually succeeded his father in Worky. Rabbi Menachem Mendel was never seen learning Torah. Nonetheless, the number of his chassidim multiplied more than his brother’s, who was known as an illustrious Torah scholar. The mitnagdim [opponents of Chassidut] would ridicule this situation, saying, “Have you seen what happened? The Rebbe of Worky left two sons after him. One knows how to learn Torah, and the second does not. And to whom do more chassidim flock? To the one who does not know how to learn.” The chassidim of Worky, related the saying of the sages (Megillah 6b) as describing their Rebbe: “If a person says to you, ‘I did not invest effort and I found success, do not believe him.’” Therefore, if you see that a person is successful in his aspirations, do not believe that no effort was invested.

“Wisdom is with the modest” (Proverbs 11:2). Wisdom is a flash of insight that comes from Above, seemingly by itself. In the terms of Kabbalah, it is called “mochin d’Abba” (the intellect of the Father principle). The primary role of a person who is learning Torah is to delve into it and develop it, with the aid of the attribute of understanding, which is mochin d’Imma (the intellect of the Mother principle). From this verse in Proverbs, we see that the female attribute of modesty—mochin d’Imma—enhances toil in Torah study and more than anything else, it attracts the flash of insight of the attribute of wisdom.

Perhaps for this reason, Rabbi Menachem Mendel would conduct himself with modesty from the time that he was young, never showing his great devotion to Torah study. He pretended that he was just a mischievous child and had almost everyone fooled. Once his mother said to his father that she did not know how to handle “your Mendeleh’s frolicsome ways.” Rabbi Yitzchak smiled and answered, “Let’s make a deal. We will split the reward that we will receive in the next world for our children. Dovid’l will be for you and Mendeleh for me!”

Ultimately, Rabbi Menachem Mendel’s concealment did not last. Despite the fact that as a child, nobody except his father saw his greatness, as a Chassidic leader, more followers flocked to him than to his older brother, Rabbi Yaakov David of Amshinov. The mitnagdim saw this as proof of the shallowness of Chassidut. They thought that the chassidim could not identify who was more worthy to lead. The chassidim, however, reversed the saying of the sages, “(If someone says) I did not invest effort and I found success—do not believe him” and based upon it illuminated their Rebbe’s path of modesty with their new insight.

The simple meaning of the sages’ saying is that “do not believe it” relates to finding success. If you see a person who has not invested effort, do not believe that he will enjoy success. The chassidim, however, said, “What if I see a person who has succeeded in achieving his goal (of serving God with righteousness)? If so, do not believe that he did not invest effort, understanding that it is the Rebbe’s modesty that caused him to conceal himself from the limelight.

This understanding offers us another insight into the earlier part of the sages’ saying which states the opposite, “If a person says to you, ‘I did invest effort and I did not find success,’ do not believe him.” The tzaddik’s humility makes him cognizant only of that which he has not yet learned. Therefore, his experience is of a person who has not yet succeeded. For his chassidim, however, his Torah thoughts are a true find!

There is a third part to the sages’ saying we have been quoting. It states, “If a person says, I invested effort and I found success—believe him.” What is the meaning of this third part of the saying? This is the gift that a person receives when he understands the limits of his knowledge, and as a reward for his toil in Torah with modesty.

Stories like this often end badly with the ire of the tzaddik awakened or with punishment for the person who insulted him. But this story is especially sweet: the Rebbe of Worky transformed the flames of scorn into a river of love. Even the lack of water, the excuse for the hard feelings, becomes a clear symbol for loving-kindness.

Rabbi Menachem Mendel was a chassid of the Rebbe of Kotzk and like him, he had a very sharp intellect and minced his words. He was, however, also the Rebbe of Worky, a Chassidut known for its potent love of fellow Jews. Instead of becoming angry, Rebbe Menachem Mendel revealed the concealed connection between him and his rival: “You are leaning on me (literally in Yiddish, in me)” he said to him. The fact that you are trying to belittle me shows that you are actually supported by me and receive your life and your purpose from me. This purpose may even stem from your self-image, which you picture as a person who scorns me, as a person who has no connection with the victim of his scorn.

If the chassid understood this from his words, why did he not simply apologize and move on? What created such a deep transformation within him, so much so that he left his own rebbe and became a devoted chassid of the Rebbe of Worky?

Sometimes, a person who strongly objects to something conceals a profound attraction to that same thing deep inside. (This is usually not apparent to the person, himself). This is the attraction that Rebbe Menachem Mendel ignited. With one direct sentence, with one penetrating look, the Rebbe revealed his love and the chassid fell in love with him beyond rhyme or reason.