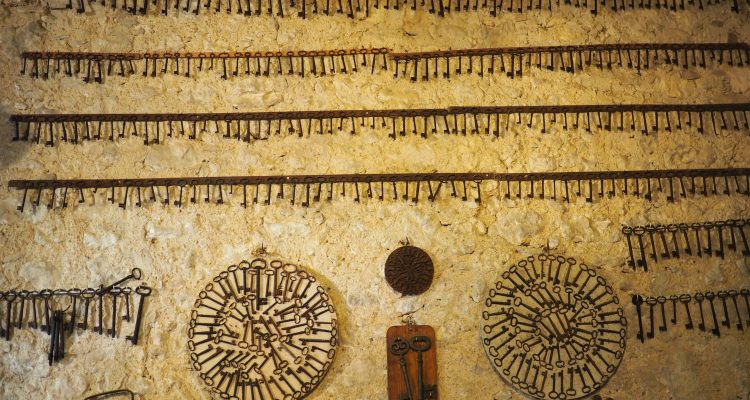 Rabbi Mordechai Shapira of Neskhizh (Nesukhoyezhe, Ukraine) was born in 5602 (1842) to his father, Rabbi Dov Ber. He was the pre-eminent student of Rabbi Yechiel Michel of Zlotshov and performed many miracles. It is told that even amongst the disciples of the Ba'al Shem Tov, there were those who disapproved of the multitude of miracles that he would perform, many of which were completely supernatural. Ultimately, his opponents made peace with him and referred people who needed salvation to him. Rabbi Mordechai was the rabbi of a number of towns and was devoted to freeing agunot—women “chained” to their husbands because their whereabouts were unknown, or they refused to grant them a divorce. He was the head of a charity for the land of Israel in Poland. Rabbi Mordechai passed away on the 8th of Nissan, 5660 (1900) at the age of 58 (the value of חֵן, the Hebrew word meaning “grace”) and was laid to rest in Neskhizh.

When he was young, Rabbi Mordechai adopted the custom of exiling himself from his home and wandering from place to place disguised as a beggar (in order to identify with the sorrow of the Divine Presence which is also in exile from its home, i.e., the Temple in Jerusalem). This was a practice common to many tzaddikim in those times.

At the same time, the young Shpoler Zaideh and the Zoslover Chazan, two famous tzaddikim in Poland, were also conducting an exile of their own. By Divine Providence, the three young tzaddikim met up at a distant town just before Shabbat. There was an inn with a pub in that town, run by a Jew. The three tzaddikim asked the innkeeper if they could spend Shabbat with him. He flatly refused. They urged him to take them in. They had no other place to go. The Jew explained that the reason he did not want them there on Shabbat was because they would suffer: At nightfall, non-Jews from the entire area would gather at his pub, drink, and become rambunctious, making it impossible to sleep. "You will not be able to stand it," he told them.

"It is specifically for this reason that we want to spend Shabbat with you," said Rabbi Mordechai. "I have just one request: When you sweep the house in honor of Shabbat, sweep out an additional four cubits (a cubit is just under two feet) around the perimeter of the house." The innkeeper did as he was requested. When the non-Jewish peasants came for their drunken Friday night revelry and stepped into the four cubit perimeter, they stopped and asked each other, "Why should we come to bother this Jew? No reason for it!" and they left, group by group.

From that day on, they no longer came to disrupt the innkeeper's Shabbat.

The wondrous part of this story is that the non-Jews were remorseful about disturbing the innkeeper. The four cubits swept on the house's perimeter in honor of the holy Shabbat created a virtual Shabbat area into which the non-Jews were afraid to enter.

As opposed to the Jewish tendency to contract and avoid possibly hostile non-Jews, Rabbi Mordechai taught the innkeeper to broaden the perimeter of holiness. This is even truer in the land of Israel, whose holiness will spread over the entire world in the future. The way to distance hostile non-Jews is to deter them by broadening the perimeter of Jewish settlement and holiness.

Rabbi Mordechai of Neskhizh used to say, "If I had my Rebbe's (Rabbi Yechiel Michel of Zlotshov's) table and the cup from which he drank his morning coffee, I would resurrect the dead." In Hebrew, the numerical values of “table” (שֻׁלְחָן) and “cup” (כּוֹס) is “knowledge” (דָּעַת). Apparently, Rabbi Mordechai's ability to resurrect the dead came from Rebbe Yechiel Michel's attribute of knowledge. Ultimately, he was able to keep his word:

A wedding was held in the court of Rabbi Yosef of Yampoli (Rabbi Yechiel Michel of Zlotshov's son). Rabbi Mordechai attended the wedding and made merry in honor of the bride and groom. In the middle of the dancing, one of the young men there entered the pharmacy of Rabbi Yechiel Michel's widow. He took something off the shelf, swallowed it, and fell dead to the floor in the middle of the dancing. Everyone panicked and those who disapproved of Rabbi Mordechai's miracle works said to him, "This is your opportunity to prove your prowess." Rabbi Mordechai went to his Rebbe's table and scraped a piece of wood from it. He put it into boiling water and forced it into the mouth of the dead chassid. The chassid jumped up and continued dancing as if nothing had happened.

Rabbi Mordechai had a particular affinity to the resurrection of the dead. He himself told another story from his early days as a Rebbe.

"Once I was walking in a snowstorm, and I saw a Jew who had frozen to death in the snow. A short time after that, I also froze to death. When I ascended to heaven, they told me that my time had not yet come and that I must return to this world. I refused and they urged me to return. Ultimately, I agreed to go back down, but only on the condition that the Jew that I had seen frozen in the snow would also return to life. In heaven, they agreed.  And then I said that I still do not want to return and suffer all the troubles that face the Jewish people. In heaven, they promised me that I would receive anything that I want for the good of Israel. After these two promises, I returned to this world. And that is how I became a rebbe."

In the book Atzei Eden by the Rebbe of Komarna, it is written that the resurrection of the dead will take place in the year 5736 (1974). When the Divrei Chaim, Rebbe Chaim of Sanz heard this, he curtly responded, "Those who know do not speak, and those who speak do not know." He then added that the time of the End of Days was revealed to only three tzaddikim: Jacob (as the Midrash relates), Daniel (to whom it is said, "And you, go to the end"), and Rabbi Mordechai of Neskhizh. Rabbi Mordechai had a special sense for resurrection of the dead, just like Jacob, about whom the Talmud says that he did not die and like Daniel, about whom the Talmud says that if Mashiach is from among the dead, he is Daniel.

Rebbe Shalom of Belz (known as the Sar Shalom) never met Rabbi Mordechai of Neskhizh personally. Once when Rebbe Shalom was young, he was learning the tractate of Midot, which is about the measurements of the Holy Temple. He was having trouble understanding the calculations of the Tosafot Yom Tov. He invested so much energy trying to understand that he eventually fell asleep.

He dreamt that an old sage appeared to him, wearing a belt full of keys. "Come with me," said the sage. The sage took him to the Land of Israel, to Jerusalem and brought him to the Holy Temple. He then began to open all the gates and showed him all that was taking place there. "Now look again at the Tosafot Yom Tov and you will understand." Rabbi Shalom looked at the Tosafot Yom Tov and understood the measurements. "Who are you?" Rebbe Shalom asked. "I am Mordechai, the son of Gita," (the name of Rabbi Mordechai of Neskhizh) "And, I am appointed over the keys of the Holy Temple." From that time on, Rebbe Shalom of Belz considered Rabbi Mordechai his Rebbe.

With the keys of the tzaddik, we can "open our eyes," as the Lubavitcher Rebbe directed, and see the redemption. The redemption has a number of components. If we further the explanation of the Sanzer Rebbe, who relates the resurrection of the dead to Jacob, we can say that the Holy Temple relates to Isaac ("the consummate symbol of a burnt offering,” i.e., one who sacrifices himself completely for God’s service). Abraham is the "father of a multitude of nations" who brings them close to serving God. Wondrously, Rabbi Mordechai of Neskhizh exemplified all three traits.

Photo by Richard Payette on Unsplash