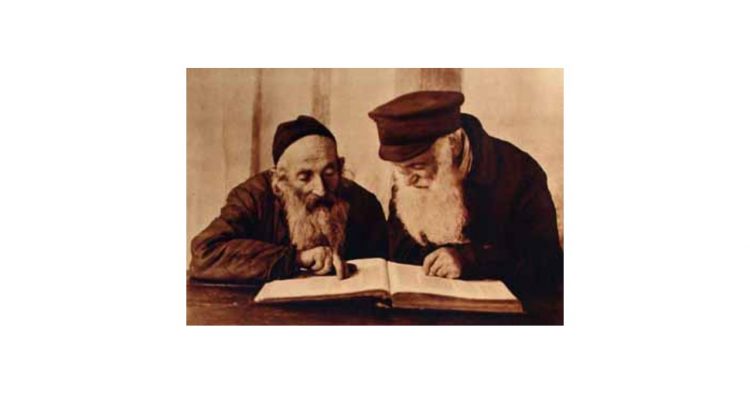 When the third Lubavitcher Rebbe, the Tzemach Tzedek, married at the age of 14, he received a dowry of 300 rubles. His friend, the 15-year-old Nechemiah, also had money to invest. They both wanted to fulfill the Rambam’s guidance of not making their livelihood from Torah learning and so, they decided to build a workshop for the production of wax seals. While the two scholars were working in their shop, they would continue to learn Torah. Once, they were so involved in their learning that they did not notice that a pot of wax had boiled and had started overflowing. A fire broke out and the entire shop was destroyed. That was the end of the wax seal workshop and all of their dowry money was lost. Later, Rabbi Nechemiah built a tallis-manufacturing workshop, from which he earned a comfortable living his entire life.

The first impression from this story is that the two friends were oblivious to their surroundings. This is actually what we would expect from Torah scholars, who are totally immersed in their study, with love. Nonetheless, we can see that Rabbi Nechemiah also has a practical side. First of all, he is an adjudicator of Jewish law. Second, while his friend the Tzemach Tzedek became a Rebbe and apparently was financially supported by his chassidim, Rabbi Nechemiah did not give up on his aspiration to work for his living, establishing a business that was both holy and profitable. He also liked to be identified with his profession and not with his rabbinical position. It is told that he once signed a halachic ruling he had issued with, “Nechemiah the craftsman.” In addition, Rabbi Nechemiah would not allow his son to publish his writings. They were published by his son only years later, following strong encouragement by the Tzemach Tzedek, as the collection of responsa, Divrei Nechemiah.

We can find parallels between Rabbi Nechemiah the craftsman and another artisan named Nechemiah from an earlier epoch. Nechemiah ben Chachalyah was one of the leaders of the return to Zion in the Second Temple period. While his partner, Ezra the Scribe, was a man of the book, Nechemiah was distinctly a man of action. Upon arriving in Jerusalem he ensured that the wall surrounding the city would be built, at the same time, dealing with attacks from the different peoples who had immigrated to Jerusalem during the Babylonian exile. Despite his name, which means “God’s comfort,” the Biblical Nechemiah’s actions were intense and goal-oriented. Perhaps because of these attributes, Ezra is identified in the writings of the Arizal, Rabbi Isaac Luria, with Moses, the giver of the Torah, while Nechemiah is identified with the Mashiach, who rectifies the world.

After the second Lubavitcher Rebbe, the Mittler Rebbe, passed away, Rabbi Nechemiah did not want to accept his friend, the Tzemach Tzedek as his Rebbe. After some time, he dreamed that the Alter Rebbe came to him and asked him, “Nechemiah, why don’t you have a Rebbe?”

“Who should I make my Rebbe?” asked Rabbi Nechemiah.

“Menachem (which means, “comforter”) will comfort us in the present and in the future,” the Alter Rebbe replied.

Rabbi Nechemiah understood that the Alter Rebbe was referring to the Tzemach Tzedek, whose name was Menachem. He rose in the morning, hitched his horse to his wagon and made the journey to Lubavitch, where he became a chassid of the Tzemach Tzedek with total self-nullification.

The words spoken by the Alter Rebbe in the dream were publicized in Chabad, particularly after Rabbi Menachem Mendel Schneersohn, the seventh Lubavitcher Rebbe [who was named after the Tzemach Tzedek] assumed the mantle of leadership. The interpretation was that, “Menachem will comfort us in the present” referred to the Tzemach Tzedek, and that “and in the future” was a reference to the seventh Rebbe.

Even though Rabbi Nechemiah ultimately accepted the Tzemach Tzedek as his Rebbe, their relationship remained one of sincere and egalitarian friendship. In light of this, it is interesting to study the words of a third Nechemiah, the mishnaic sage, Rabbi Nechemiah in his dispute with his teacher, Rabbi Akivah regarding the opening verse of the Song of the Sea (Sotah 30b). The verse reads, “Then Moses and the Children of Israel will sing… and they said, saying” (Exodus 15:1). Their disagreement is in how to understand the roles of Moses and the people while singing the Song of the Sea.

Rabbi Akiva states that at the sea, Moses, imbued with Divine inspiration, sang alone, while the nation responded after each verse, “I will sing to God.” Rabbi Akiva describes this as being similar to, “How a great person reads the Hallel [thanksgiving prayer].” To understand this analogy, we need to add that unlike our current practice, in earlier times, the prayer leader alone would recite the verses of the Hallel and the congregation would answer “Halleluy-ah.”

Rebbe Elazar is of the opinion that the people repeated Moses’ song, verse by verse: “Like a child reading the Hallel.” A child cannot be a prayer leader. He can, however, read the Hallel out loud and the congregation can repeat his words.

Finally, we come to Rabbi Nechemiah who attributes the Divine inspiration in the Song of the Sea to the entire people of Israel. Just as in our daily public prayers, the congregation prays together and the prayer leader just says the opening words, so at the sea, Moses began singing and the Children of Israel joined in on their own.

These three opinions incrementally reduce the gap between Moses and the Children of Israel, with Rebbe Nechemiah’s opinion at the narrowest end of the gap.

The difference is not in the meaning, but in the emphasis. In the first statement, which emphasizes Moses’ greatness—comparable to six hundred thousand Jews—we are left with an impression that the Jewish people pale in comparison to Moses. But, since the second statement goes on to equate the people to Moses’, then their greatness is stressed. As a whole, the Jewish people represent an actual revelation of the Shechinah (God’s Divine Presence) just as Moses revealed God’s Presence through his prophecy. Thus, Rabbi Akiva emphasizes Moses’ greatness while Rebbe Nechemiah emphasizes the loftiness of Israel.

On a deeper level, Rabbi Akiva and Rabbi Akiva’s opinions can be interpreted as expressing a developmental model tracing the growth of the Jewish people on the one hand and Moses’ efforts to descend from both the figurative and literal mountain to connect with the Jewish people. Moses comes to the Jewish people at the very beginning of their formation and nurtures them as they grow. His final reincarnation, the Mashiach, will lead an ancient, mature nation, who knows God. Rabbi Akiva is mostly identified with Moses. His disciple, Rebbe Nechemiah, aspires to see the final leadership of Mashiach as an incarnation of Moses.

In the same way, Rabbi Nechemiah of Dubrovna accepted the Tzemach Tzedek as his Rebbe, but felt the future equality between Moses—the leader—and the Jewish people—the chassidim.

Rabbi Nechemiah of Dubrovna’s connection to Mashiach and to the two messianic Nechemiahs is particularly highlighted in the story of his passing:

The entire night of Rabbi Nechemiah’s sixty-fourth birthday, he sat up, as was his custom, writing responsa. He was completely healthy. He awoke as usual in the morning and went to the synagogue, participated in the service and then prayed alone at length. When he finished praying, he suddenly died.

Like the practicality described in the first story, surprise is another messianic trait. One of the seminal verses describing the redemption is, “Suddenly, the master who you are requesting will enter his chamber” (Malachi 3:1). Like the swing of a pendulum from side to side, Rabbi Nechemiah’s sudden death caused new light to be drawn down into the world, with the same suddenness. This is the movement of “run and return,” which alternates between the will to leave this world and to relate only to God and the understanding that our present reality is a part of the Divine truth.

In the merit of Rabbi Nechemiah, who died suddenly, may the light of Mashiach suddenly appear.