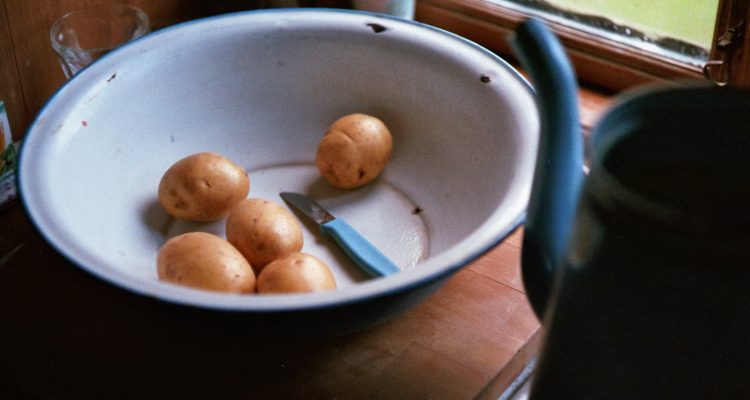 Rabbi Shalom of Kaminka: Peeling Potatoes was Never so Lofty

Rabbi Shalom Rosenfeld, the rabbi of Kaminka and the founding father of the Chassidut of Kaminka, was born to the philanthropist Yaakov Yosef, and Yenta, the daughter of Rabbi Yehoshua Tzvi Heschel of Behr. He finished the entire Talmud at the age of 9. In his youth, he studied under the tutelage of Rabbi Tzvi Hirsch Harif and Rabbi Shlomo Kluger and later became a chassid and disciple of Rebbe Naftoli of Ropschitz. Rabbi Shalom, who never officially served as a Chassidic rebbe, was known as a great and brilliant tzaddik. Many of his teachings are intertwined with witticisms that conceal supernal secrets. He passed away on the 20th of Cheshvan, 5612 (1851). His only son, Rabbi Yehoshua, succeeded him in  Kaminka. His Torah teachings and stories about him were printed in the book, ‘Ohev Shalom.’

What does the departure of the soul from the body have to do with peeling potatoes? We can imagine that the number of potatoes that needed to be peeled in Ropschitz was enough to make anyone’s soul depart from their body, but that is not the only connection…

Another story about the two friends, Rabbi Shalom of Kaminka and Rabbi Chaim of Sanz in the Ropschitz kitchen:

Once, Rabbi Shalom and Rabbi Chaim were peeling potatoes in Rebbe Naftali of Ropschitz’s kitchen. The Rebbe entered the kitchen suddenly and vigorously threw a potato into the water-filled pot there. Water splashed everywhere and Rabbi Naftali said to them, “And I will throw upon you pure waters and you will be purified.”[2] From that time on, a spirit of purity dwelled upon them.

Since the destruction of the Holy Temple in Jerusalem, we lack the purification of the purifying waters (mei chatat, prepared with the ashes of the red heifer). Only in the future will the verse that the Ropschitzer Rebbe said be fulfilled. But for true tzaddikim, even a tapuach adamah (potato) can serve the purpose of a parah adumah (red heifer. In Hebrew, adumah is cognate to adamah) – and can transform kitchen work to service in the Holy Temple in purity.

Q: My daughter has gone

The Rebbe Maharash: God Before...