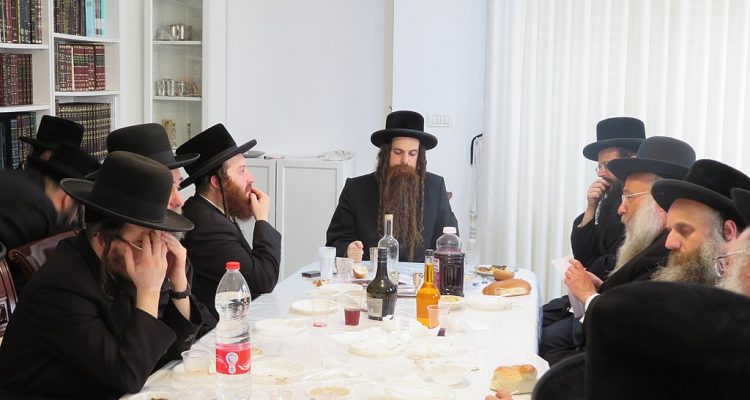 Rabbi Shlomo of Karlin: Accept the Gift of Divine Inspiration?

The holy Rebbe Shlomo Halevi of Karlin, was born to Rabbi Nachum in 5494 (1738). He was a preeminent student of the Maggid of Mezritch and of Rebbe Aharon Hagadol of Karlin. After the passing of Rebbe Aharon, Rebbe Shlomo assumed his mantle in Karlin. He was known for his powerful devotion to God and became famous as a miracle worker motivated by genuine self-sacrifice. His prayers were fiery, he gave all his money to charity and his Torah learning was enthusiastic and stormy. The great sages of his generation admired him and he had a particularly close relationship with the Alter Rebbe of Chabad. His primary students include Rebbe Asher of Stolin, Rebbe Uri (the Saraf) of Strelisk and Rebbe Mordechai of Lechovitch. In the year 5552 (1791) a Russian soldier shot Rebbe Shlomo while he stood devoutly in prayer. Rebbe Shlomo suffered for five days, until his soul ascended to heaven on the 22nd of Tamuz. Many considered him to be the Mashiach the son of Joseph. His teachings were compiled in the book Shema Shlomo.

Rabbi Shlomo of Karlin was a disciple of the Maggid of Mezritch. The Maggid’s pre-eminent students would sit around his table for meals, particularly on Shabbat and special occasions. Each student had his own place. The Maggid would pass out the food with special intentions for each disciple.

Once, Rabbi Shlomo of Karlin was sitting at his place at the table and the Maggid gave him a piece of fish to pass on to a different disciple. He looked at the piece of fish and perceived that the Maggid had infused it with ruach hakodesh (Divine inspiration) for whoever would have the merit to eat it. It was very difficult for him to pass the fish on to its destination, but what could he do? Sorrowfully, he took the fish and unwillingly set it before the disciple who had been designated to receive it. Shockingly, the student turned to him and said that he had a high fever and he should not be eating anything. He offered his portion of fish to Rabbi Shlomo. In cases like this, one must not think twice. Rabbi Shlomo put the piece of fish in his mouth as quickly as possible. Afterward, he said in Yiddish: “I ate ruach hakodesh and he was left with the fever.”

Is the gift of ruach hakodesh from a rebbe good or not? Chassidut presents both sides. On one hand, there are stories similar to ours, which highlight the wisdom of the tzaddikim and the chassidim who merited those lofty levels. On the other hand, there are many expressions in Chassidut that oppose reliance on the service of the tzaddik and meriting spiritual levels that were not earned with the independent service of God.

We could say that this is the difference between the Chabad approach and the approach of the chassidim of Poland. Chabad prefers “service by merit of his own efforts,” while the Polish chassidim prefer ‘cleaving to the tzaddik.’ However, we also find in Chabad that the Alter Rebbe offered a spiritual gift to Rabbi Isaac of Homil” “Come with me to the mikvah (ritual bath),” he said to him, “and I will make you a consummate tzaddik!” Rabbi Isaac turned the offer down, thinking that it was better to serve God with his own efforts. At the end of his life, however, he regretted his decision. The gift of being a tzaddik does not conflict with a person’s own efforts, Rabbi Isaac explained, but instead is a basis for a loftier level of service.

What then, is the difference between a good gift and a gift that we should pass up? And in our context, what is the ruach hakodesh that we should grab without thinking twice, and when does this type of trial turn into a quest for a spirit that is nothing more than an aspiration for personal greatness?

This entire story is about many shades of da’at. Beyond the da’at in the form of ruach hakodesh with which the Maggid imbued the fish, Rabbi Shlomo’s quick reasoning shows that he was truly a master of da’at. His perception that the fish was imbued with ruach hakodesh is also a form of ruach hakodesh, which rewards him with additional da’at, as in the secret of “He gives wisdom to those (who are already) wise.”[1]

Furthermore, a true master of da’at knows that perception about something is a sign of belonging to it. If it was specifically Rabbi Shlomo who perceived the ruach hakodesh in the fish, it is a sign that it is meant for him. Why then, did the Maggid give it to a different student? Rabbi Shlomo does not know the answer to that question and does not get involved with it. The knowledge of what we have to know is also a form of da’at.

Rabbi Shlomo’s ruach hakodesh shows him that the fish is relevant to him, but there are levels higher than ruach hakodesh. A Rebbe is a “wondrous advisor” and his deeds are connected to the root of da’at, in the Unknowable Head. An extreme example of a situation like this is a man who sees with ruach hakodesh that his soul mate is marrying another person. What is the reason? Only God knows. In our story, the miracle takes place and the holy fish returns to its rightful place.

Rabbi Uri, the Saraf of Sterlisk, was one of the great disciples of Rabbi Shlomo of Karlin. He only journeyed to his Rebbe twice in his life, but each time, he stayed with him for an extended period. On one of the visits, he remained with Rabbi Shlomo for a very long time and his family had no source of sustenance. His wife went to work as a maid in the home of the “Yeshuot Yaakov” – the great rabbi of his city. After some time, the Rebbetzin noticed that her maid was not an average person and asked her who she really was. The Saraf’s wife told her the entire story, that she is the wife of a great Torah scholar who had traveled to his Rebbe. The Rebbetzin told her husband, the Yeshuot Yaakov, who was not a chassid and did not know the depths of the connection between a chassid and his rebbe.

After some time, Rabbi Uri returned home. The rabbi of the city, the Yeshuot Yaakov summoned him to see him and asked him: “How could you leave your home for such a long time and practically desert your wife? For what? What did you learn from Rabbi Shlomo that you could not have learned here?”

The Saraf’s answer has been repeated in variation regarding a number of tzaddikim and chassidim: “I learned that there is a Creator to the world.” The Yehsuot Yaakov looked at him in amazement, called the servant, and asked her, “Does the world have a Creator?” The maid looked at the rabbi as if he had lost his mind, and answered, “Certainly there is a Creator of the world. Many times a day we make the blessing, “that all comes into being with His word. And even more!”

The Rabbi looked at Rabbi Uri and said to him, “Even this simple maid knows, so why leave your family for years?” Rabbi Uri answered him succinctly, “Zie zogt ,ich veis!” (“She says it, I know it!”).