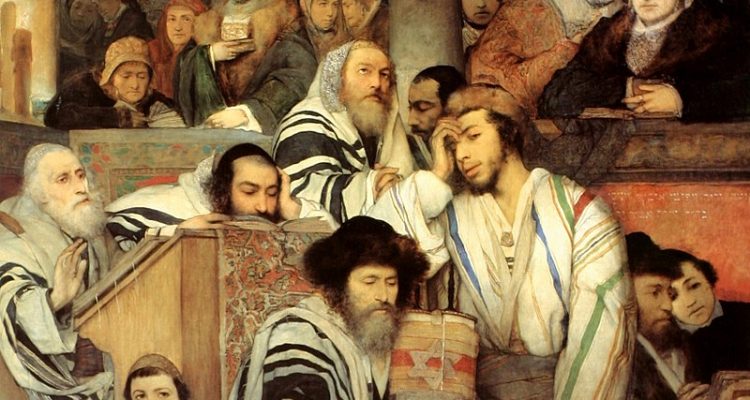 Rabbi Yaakov David Kalisch, the “Alter Rebbe” of Amshinov, was the eldest son of Rabbi Yitzchak of Vorki and the brother of Rabbi Menachem Mendel of Vorki. When his father passed away in 5608 (1848), Rabbi Shraga Feivel of Gritza succeeded him. Half a year after the passing of Rabbi Shraga Feivel, Rabbi Yaakov David became the Rebbe of Amshinov. Like his father, Rabbi Yaakov David was heavily involved in the political issues facing his community and spent much time in Warsaw lobbying for his brethren, sometimes with the Chidushei HaRi”m. He was one of the main activists involved in nullifying the “decree of the sidelocks and beard” of the Russian regime. Similar to the approach of the Chassidut of Vorki, Rabbi Yaakov David was exemplary in his love of his fellow Jews and in his joyousness. He passed away on the fourth of Kislev 5638 (1877) in Italy and was buried in Amshinov.

Even though he had ten thousand of his own chassidim, the holy Rabbi Elimelech of Gradzhisk would journey to Amshinov for Rabbi Yaakov David of Amshinov’s New Moon feasts. The holy Rabbi Elimelech was accustomed to praying at length. Once, he was in the middle of his morning prayers in Amshinov, when Rabbi Yaakov David entered and began his prayers. They both finished at the same time.

“Amshinover Rebbe,” Rabbi Elimelech asked, “When do you pray?”

“As is written in the morning prayer, ‘And David blessed God’” Rabbi Yaakov David responded, alluding to his own name, David. “I am always standing in prayer before the Holy One, Blessed Be He. But the continuation of ‘And David blessed God’ is ‘before the eyes of all the congregation.’ When the congregation sees me, then ‘and David said,’ (as per the end of the verse) David grabs some prayer time quickly.”

Rabbi Yaakov David divides prayer into two categories: Prayer that wells up from the heart on a constant basis and prayer in a public quorum, which is short and rather rushed (at least relatively),. From the verse that he quoted, we can understand the differences between these two types of prayer:

Prayer from the depths of the soul is the feeling that we are nothing other than “a part of God above” which, as per the will of the Creator, became an independent entity. This feeling is expressed in constant prayer, every turn of the way. It includes pure prayer that is not connected to a particular request. Chassidut explains that the word tefillah (prayer) is from the expression in the Mishnah “hatofel kli cheres”  which means to connect: The person praying is conscious of himself on the one hand, and of his source in Divinity on the other hand. The Jew always yearns to cleave and connect to God and to express the fact that his soul is Divine, a part of God.

Rabbi Yaakov David quotes the phrase “And David blessed God” in relation to this type of prayer. “Blessing” draws down Divine energy from Above. To bless or “draw God down” means to reveal God’s reality and presence in the soul and in the world. The first letters of the words ‘And David blessed God” ויברך דוד את הויה spell the word ודאי (certain). This alludes to the strong certainty that we need for this type of prayer. We must not let our thoughts wander even for a moment from the fact that we are standing before our Creator, Who “as His Name is certain, so is His praise.” It is pure connection.

What about the rushed public prayer? The Amshinover Rebbe continues to explain: “Vayomer David” (And David said).  This expression refers to the Creation, which God created with ten utterances beginning with “Vayomer” (and He said) specifically. By saying this during prayer we are empowered to effect physical salvation for Jews who need material blessing in this world – children, health and livelihood. As explained in the Zohar, the secret of the word אמר (said) is that it is an acronym for אור מים רקיע (light, water, firmament), each of which is mentioned five times in the Torah account of the first two days of Creation. This is the process of transforming a spiritual reality (light) into physical reality (firmament) by means of an intermediary state (water).

Repeating this process in order to draw down abundance and to effect a change in a certain detail of reality requires alacrity: The person praying has to quickly draw down abundance from the spiritual world to the physical world while overcoming all the prosecuting angels and obstacles in the way. This is the explanation for the secret of the Priestly Blessing (God’s instruction was to “say to them” [the priests]), which speedily draws abundance down to this world. When praying for material abundance, the transformation of spiritual good to physical good, the Rebbe of Amshinov also had to rush.