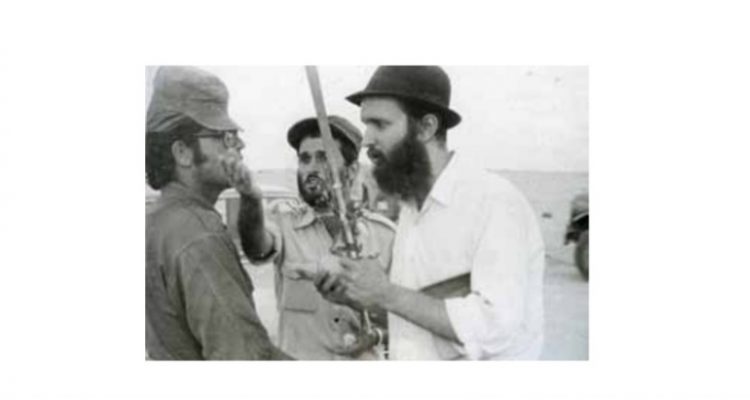 On Hoshanah Rabbah (Sukkot) 5781 (2021), Rabbi Ginsburgh’s close friend and student, Reb David Refael Feinshel Ben-Ami, passed away. Dadi, as he was affectionately known, was one of the first famous Israeli ba’alei teshuvah—making the spiritual journey from the agricultural village of Nahalal in northern Israel to devout observance. While very connected to Chabad, Reb Dadi eventually became a Breslov chassid. In the last disk of songs he put out, Reb Dadi sang Rabbi Ginsburgh’s soul melodies. About that album, he exclaimed that it was “the song of my life.” The following are excerpts from a Hebrew interview with Reb Dadi, which appeared in the magazine “Karov Elecha” four years before his passing.

Alone in the World

Today, newly observant Jews can be found in all walks of life. But fifty years ago, it was a rare phenomenon. “There were no ba’al teshuvas then, I was alone in the world,” Reb Dadi describes. “I had immense heavenly help. The process that I went through was clean, with no imitations, copying, or leaning on others. I did not have a study partner to help me advance or who would advance together with me.”

Despite the difficulties, there were a number of illustrious individuals who helped him through the process. One of them was Rabbi Yisrael Meir Lau (who would later be the Chief Rabbi of Israel). “I got to know him during the time that I began to attend the synagogue in Nahalal, when I would return home for Shabbat. It required great courage of me and a bit of ‘craziness.’ Who went to the synagogue? I ignored what everybody said. That is what I felt I had to do, and that is what I did. Most of the time I lived in northern Tel Aviv. I was invited to an evening of songs of the Palmach and the undergrounds. The hosts ordered kosher sandwiches and also invited Rabbi Lau, who was then a young rabbi in northern Tel Aviv. Rabbi Lau taught some chassidic melodies. I sat down next to him and asked him if I could come to his synagogue. ‘Of course,’ he answered. It turned out that his synagogue was a minute and a half from my apartment. I would go there to pray, and as soon as he would see me, he would get up and seat me next to him. He was the first person to bring me into a synagogue.”

Later, Reb Dadi looked for a chassidic synagogue that was closer to his heart. First, he prayed at a Chabad synagogue and then a Breslev synagogue that was close to his home. Eventually, he rented a room in Kfar Chabad. “I began to study in the local Tomchei Temimim yeshiva. The staff there saw that they did not know how to properly answer my questions, and sent me with my entire pile of questions to ‘the angel’ as he was called then: Rabbi Yitzchak Ginsburgh. Rabbi Ginsburgh truly was an angel. He was the only person who succeeded in answering all of my questions. He answered them simply and directly with basic concepts that entered my heart.

“Throughout the 45 years that I have been connected to Rabbi Ginsburgh, I have never seen him angry about anything,” he relates. “During the Yom Kippur War, when I was 23 and he was 30, we very much wanted to help the war effort. I was still in the reserve army as a singer. Rabbi Ginsburgh joined me. We thought that maybe we would sing for the soldiers on the front lines to raise their spirits. Rabbi Ginsburgh suggested that we do a campaign with the Four Species, as it was Sukkot. I had connections with the ensemble from the southern command, and they gave me a command car and a driver. I received a folding sukkah and money to buy a set of top-quality Four Species in the marketplace in Be’er Sheva. We set out for El Arish, in the Sinai desert.

When we got to El Arish it was already dark. We sat in the infirmary, which was the only place that had a light on. When there was heavy shelling, Rabbi Ginsburgh said in the name of the Ba’al Shem Tov that when there is danger, one must tell stories of tzaddikim. And that is what he did.

I was holding a prayer book, and a soldier approached me. He was from a kibbutz, a big fellow. He pointed at my prayer book and asked me, “Do you have one of those for me?” He wasn’t even sure what it was, but he did understand that it was a book of prayers. I gave him a small prayer book. He told me that he was the head of a mine sweeping team. When they were on duty, he could potentially explode at any moment. I told him to say “Shema Yisrael” twice a day, and to keep the prayer book in his pocket for protection.”

“The following morning we brought out the Four Species for the soldiers. Thousands of soldiers ran over to us to fulfill the mitzvah. In half a day, the yellow etrog had turned black from so much handling. Rabbi Ginsburgh said that the black etrog was the most beautiful of all.”

Reb Dadi told the story of Rabbi Shmelkeh of Nicolsburg, who was the prayer leader for the Days of Awe. He would pray with such sweetness, and such beautiful melodies would come from him, that it was clear that the Shechinah was singing from his throat. It is told that his melodies were all new. When a person is in a state of holiness and ascends to even greater heights of holiness, everything that comes from him is pure.  There are classic Chassidic melodies like the Four Bavot of the Alter Rebbe, which come from a level of holiness and loftiness in the service of God. “My main goal has been to perpetuate these melodies, specifically, and not to sing new pop songs, like the song that made me famous back then,” he says, without mentioning the name of his hit song from before he became observant.

What eventually convinced him to record Rabbi Ginsburgh’s original melodies was the understanding that the Rabbi did not write them to become famous. Instead, they are simply an expression of his service of God. “They come from his soul. In my eyes, they are very lofty.” Reb Dadi emphasized that Rabbi Ginsburgh did not at all urge him to specifically record his melodies. Instead, he urged him to use the talent with which God blessed him to eternalize Chassidic melodies. “That is what I did. Forty years ago, we thought of doing something together with his melodies. I felt great value in his melodies.”

After some time, one of Rabbi Ginsburgh’s students, who was also connected to Reb Dadi, put the project together. “For a long time, I sat and put words on Rabbi Ginsburgh’s melodies. Some of them the Rabbi himself did, such as “Chadesh Sesoni,” “Ein Aroch Lecha,” and “Ata Takum.” We worked on the album, “Bokeah Chalonei Rakia” for about four years. The work was fascinating. Many of the musicians were the Rabbi’s students. I feel connected to melodies in which I feel God. That is my objective and the objective of all sounds.”