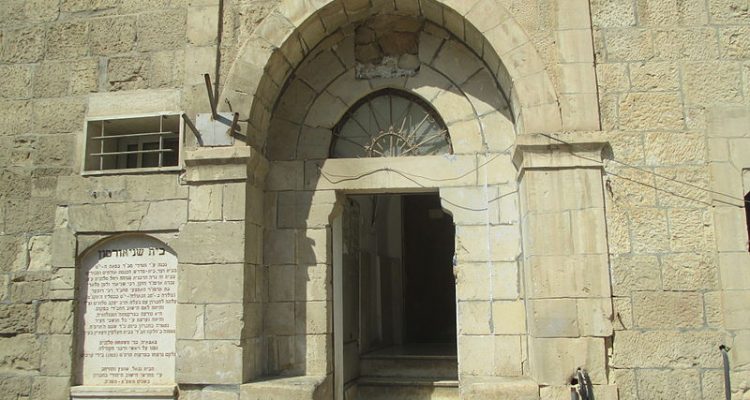 Rebbetzin Menucha Rachel – Mother of the Jewish Community of Hebron

Rebbetzin Menucha Rachel Slonim was born on 19 Kislev 5559 (1798), the day that her grandfather, the Alter Rebbe, was released from a Czarist prison. When he exited the prison, the Alter Rebbe was informed of the good news that a daughter had been born to his son, the Mittler Rebbe. The Alter Rebbe gave her the name Menucha Rachel: He named her Rachel after his daughter, who had died at an early age, and Menucha (which means “rest”), saying, “Now we will have some rest.”

After her marriage to Rabbi Yaakov Kuli Slonim, Menucha Rachel lived in Lubavitch. In 5575 (1815) her father sent a group of chassidim to bolster the Jewish community of Hebron and to establish a Chabad community there. To this purpose, the Mittler Rebbe initiated the purchase of a small synagogue adjacent to the larger Sephardic Avraham Avinu synagogue, as well as other lots in the area. In 5605 (1845) Rebbetzin Menucha Rachel made aliyah to Hebron along with her family. Their house (pictured), purchased by the Mittler Rebbe, is known until this very day as Beit Schneerson.

Rebbetzin Menucha Rachel quickly became a central figure in the Hebron community. She was known for her wisdom and acts of kindness. She would pray for the recovery of the ill and for women experiencing difficult childbirth. Every year, on the 19th of Kislev, she would distribute lekach (honey cake) and she would immerse in a mikveh every Friday before Shabbat. Not only was Rebbetzin Menucha Rachel famous among the Jews of Hebron, but the Arabs of the city admired her as well as a miracle worker. Great tzaddikim would ask her for her blessing.

On the last night of her life, 22 Shevat 5648 (1888). She asked her 12-year-old great-granddaughter not to stay with her, as was her custom, requesting her aide, Zeacel, instead. In the middle of the night, Rebbetzin Menucha Rachel woke Zeacel and asked her to boil water so that she may wash up and change her clothing. She then asked to call her entire family in, while her lips were continuously whispering Psalms. When Rabbi Ephraim Halavan, a rabbi in Hebron, wanted to go out to call in a quorum of ten men to be present when her soul departed, she hinted that he would not get back in time, saying “My fathers are here with me.” Shortly afterward, this righteous woman passed away and was laid to rest in the ancient Jewish cemetery in Hebron.

Ever since she was a small child, Rebbetzin Menucha Rachel desired to make aliyah to the Land of Israel. She lived in Russia, but heard much about the Land, “the Land that God your God seeks, from the beginning of the year to the end of the year,” the Land of the Nation of Israel. Sometimes, if a person strongly desires something and it does not actualize, he can become ill as a result. The young Menucha Rachel loved the Land of Israel and desired it so passionately that she became critically ill. She lay unconscious in her bed until her father, the Mittler Rebbe, whispered in her ear that he promises her that when she grows up, she will have the merit to make aliyah to the Land of Israel. Menucha Rachel’s soul heard her father’s promise – the promise of a great tzaddik who had ruach hakodesh (the holy spirit). This strengthened her soul and she recuperated. Even after she recuperated, however, she remained sensitive to cold all her life.

After the Mittler Rebbe passed away, the time came for Rebbetzin Menucha Rachel and her family to make aliyah to the Land of Israel. She came to the third Lubavitcher Rebbe, her cousin, the Tzemach Tzedek, to request his blessing before they set out on their journey. She related that the only thing that concerned her was that she was weak and liable to become ill due to the cold winter weather. The Tzemach Tzedek blessed her that from that day on, whenever rain would fall, she would walk between the drops. The Rebbe also blessed her with good health and long life. She truly did live a long life – and never got wet in the rain.

The Jews of Hebron appropriately called Rebbetzin Menucha Rachel the “mother” and “grandmother” of the Chassidic community in Hebron. For this righteous woman, who so passionately desired to make aliyah to the Land of Israel, it was not enough to just be in the Land. She became involved with the entire community, giving her sage advice and taking care of their physical needs, as well. Her acts of kindness were famous and stories of the miracles that she performed abounded. According to Hebron tradition, Rebbetzin Menucha Rachel saved the Jews of Hebron from the Arab ruler and the Bedouin gangs of the time. Many Jews came to Hebron from Israel and around the world to receive her blessing – as if she was a chassidic rabbi. Even the tzaddik Rabbi Yechezkel of Shinwa, author of the “Divrei Yechezkel”, journeyed especially to Hebron while visiting Israel in order to merit her blessing.

In addition to her righteousness and lineage, Rebbetzin Menucha Rachel was known as a very wise woman. Our matriarch, Rebecca, whose chamber in the Garden of Eden is in the sefirah of wisdom, is also deeply connected to the Land of Israel: At a very young age, when Eliezer the servant of Abraham came to request her hand for Isaac, she did not hesitate for a moment and said: “I will go!” This willingness, besides her inner ability to identify that Isaac was her true soulmate, was also due to her sense that the Land of Israel was Isaac’s place – and thus, her place, as well. Wisdom, love of the Land of Israel, and the ability to identify her soulmate are characteristics that are also pronounced in Rebbetzin Menucha Rachel. When she was already older and had been widowed, it was suggested to her that she marry the Tzemach Tzedek, who had also been widowed. The Rebbetzin refused the attractive offer, saying that she was not willing to leave the Land of Israel and that the Rebbe would certainly not be willing to leave his chassidim in the diaspora.

The Tzemach Tzedek used to say, “Mach da Eretz Yisrael” (Make the Land of Israel here). The Land of Israel is not strictly a physical place. Tzaddikim can sense it even when they are outside the Land. Nonetheless (and the Lubavitcher Rebbe also expressed this) it is certain that when Mashiach comes, nobody will be willing to remain in the diaspora. All the Jews will pack their belongings and make aliyah to the physical Land of Israel. Rebbetzin Menucha Rachel, who was connected to settling the Land of Israel with all her heart and soul, expresses the aspiration for the complete redemption and the understanding that this goal significantly depends upon the fact that Jews will be living well in the Land. Most of the Rebbetzin’s efforts were invested in building the chassidic community in the Land of Israel, which would actualize her messianic vision. Even the events of the Rebbetzin’s date of birth on the 19th of Kislev came about as a result of the donations made by the Jews of the diaspora to the Jews of the Land of Israel.

Rebbetzin Menucha Rachel’s birth on the 19th of Kislev completed a process of submission-separation-sweetening on that day: The passing of the Maggid of Mezritch was, of course, submission. When a tzaddik passes away, his soul ascends to great heights and he instills the fruits of his spiritual service in his disciples. But the general feeling on this day is submissive silence in the face of the heavenly decree. The release of the Alter Rebbe from Russian prison is a movement of separation from tribulations and impure husks, as preparation for a new breakthrough in Chassidut. The birth of the Rebbetzin Menucha Rachel is, of course, sweetening, the pinnacle of which was her messianic devotion to establishing chassidic life in the Land of Israel.