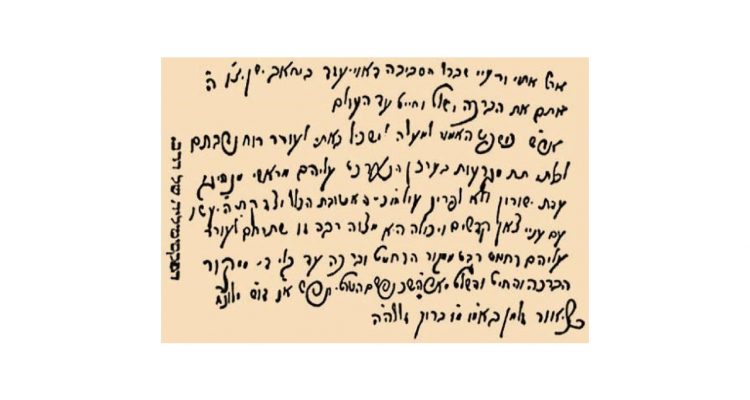 The Alter Rebbe of Chabad: In the Merit of Love of the Land of Israel

While Rabbi Shneur Zalman of Liadi, the Alter Rebbe of Chabad (whose day of passing is the 24th of Tevet) did not merit to make aliyah to the Holy Land, his entire life revolved around the Land of Israel and its renaissance.

Much has been written about the famous first imprisonment of the Alter Rebbe in a Russian prison and his release on the 19th of Kislev 5559 (1798). Notably, the Alter Rebbe did not attribute the miracle of his salvation from prison and danger of death that hovered over his head to his dissemination of Torah and Chassidut to thousands of his chassidim, but rather specifically to the merit of his coming to the aid of “the Holy Land and its inhabitants.”

In 5537 (1777), a little over twenty years before the Alter Rebbe’s arrest, Rabbi Menachem Mendel of Vitebsk, the great disciple of the Maggid of Mezritch whom the Alter Rebbe regarded as his own rebbe, made aliyah to the Land of Israel with approximately 300 of his disciples. The Alter Rebbe also joined the journey to the Holy Land. But when they reached the city of Mohilov, on Russia’s eastern border, Rabbi Menachem Mendel entreated him to remain and to serve as a faithful shepherd for the thousands of chassidim in White Russia (Belarus).

Rabbi Menachem Mendel and his disciples settled in Tiberias. They were the largest group to make aliyah to the Land of Israel in that era, after hundreds of years during which the Land had remained desolate and barren of her children.

Over the years, the Alter Rebbe devoted himself to disseminating Torah and Chassidut throughout Russia and Belarus. Furthermore, he supported the Jewish settlement in the Land of Israel, which suffered dire poverty, with great dedication. Every year, the Jews of the Land of Israel would send emissaries to “the Old Country” to raise funds to sustain the Jews of Israel. Despite the differences between the various Jewish communities in Israel, a part of the funds collected annually was always set aside to advance their mutual goal of developing the renewed Jewish settlement in Eretz Yisrael. As a result, by the middle of the 19th century, Jerusalem boasted a Jewish majority.

The Jewish opponents of Chassidut were not pleased that Chassidut was rapidly spreading throughout Russia. An opponent of Chassidut by the name of Hirsch ben David sent a letter to the Russian authorities with all sorts of false accusations regarding the ‘cult of Chassidim.’ He claimed they were steeped in drunkenness, bribery, and conspiracy to aid the French. But the most serious accusation that concerned the Russians was the claim that the Alter Rebbe was transferring money to the Jews of the Land of Israel, which was ruled at that time by the Turkish Empire, Russia’s enemy.

Because of linguistic obstacles during the interrogation, the Alter Rebbe was ordered to submit a written deposition to answer the accusations in the slanderous letter against him. This unique document consists of twenty-three paragraphs. It was translated into Russian and filed in the investigation file. After the fall of communism and the USSR, the iron curtain was also lifted from the Russian archives and the document became available to the public.

In a 7-page long testimony, the Alter Rebbe responds in simple and clear language to the accusations and explains some of the basic teachings of Chassidut, the role of the Rebbe, and the central place of Torah learning and prayer. In the final paragraphs, he responds in detail to the false accusation that he was transferring funds to the Turkish Empire in the guise of charity to the poor of the Land of Israel:

“In the Land of Israel, there are large communities of Jews in Jerusalem, and Tiberias and Tzfat and Hebron, in addition to small villages. The inhabitants originate from all countries, and they have no other employment or work or business, for they pray and study Torah. And they have no income there, relying only on what their emissaries to all the countries—who request donations from every generous person who gives them according to the generosity of his heart—bring them. These emissaries have a written letter attesting to the fact that they are community emissaries, written and signed with the signature of the famous (rabbis) in the Land of Israel, whose signatures are recognized in the countries to where they journey from the Land of Israel. This has always been the custom, and this is our religion—to sustain and provide for the poor of the Land of Israel so that they will pray there for all Jews,” the Alter Rebbe wrote.

“And in all the places to where the emissaries travel, they show their letter to the rabbi and the dignitary of the city, and the rabbi writes a letter, called a “recommendation” to awaken great compassion in the hearts of all the generous of our nation for the poor people of the Land of Israel and to magnify this mitzvah in the eyes of the people, so that all Jews, wherever they live, will pray and worship specifically before the Land of Israel, which is the gateway to Heaven. And in many holy books, the virtues of the Land of Israel are written about in length, and praise is given to those who sustain and provide for its inhabitants. And every rabbi writes according to his intellect and understanding of the books and according to the skillfulness of his language and gives his letter to the emissary to travel to the towns under this rabbi’s leadership. And when the emissary reaches a different state, with a different famous rabbi there, he receives a different letter from that rabbi and travels throughout those towns until it is time for him to return to the roads and return to his home, to the Land of Israel. I have also not prevented myself from sometimes writing letters of request for the emissary from the Land of Israel who journeys throughout our state and its surroundings, to arouse compassion, grace, and lovingkindness for our brothers, the inhabitants of the Land of Israel in the hearts of the compassionate, generous people of our nation. This is not done as a decree to direct them, God forbid—only to inform them, for thus it is commanded upon us according to our religion and not to sequester oneself from the public.”

“These emissaries, when they leave the Land of Israel, they part path on their way to different countries. There are those who journey to Ashkenaz (Germany) and Holland so that they will sustain the poor who came from Germany and Holland. For, even those who were wealthy have become poor there due to lack of sustenance. And whatever remains is distributed to all the poor from all the different countries.

“And who am I, the lowliest of people like me, that God has brought me to this point, that the Name of Heaven has been magnified and sanctified by me… for the primary battle that they chose to fight with the Torah of the Ba’al Shem Tov and his disciples and the disciples of his disciples specifically. But this has come from God, to carry forth merit through us, in the merit of the Holy Land and its inhabitants. And may God help us always to broaden the narrow straits and to extricate us from troubles.”

In these short sentences, we can feel the Alter Rebbe’s connection and devotion to bolstering Jewish settlement and life in the Holy Land. This devotion developed with the establishment of Chabad communities in Jerusalem and Hebron. The Alter Rebbe’s granddaughter, Rebbetzin Menucha Rachel, who was born on the day of his release from prison, made aliyah and settled in Hebron.

Since then, the Chabad Rebbes who succeeded the Alter Rebbe have continued his tradition of love for and cleaving to the Holy Land until this very day.

Image: The Alter Rebbe's writing about the Land of Israel