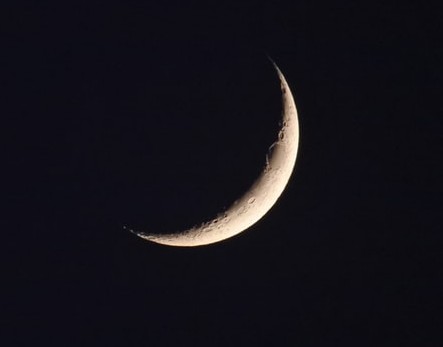 The Alter Rebbe, the Jailer and the New Moon

A story for the 19th of Kislev, the day of the redemption of the Alter Rebbe of Chabad, Rabbi Shneor Zalman of Liadi, from the Russian prison, where he was jailed for false charges of treason:

After just a short time, the Alter Rebbe’s Russian prison guard realized that the Jew under his watch was a holy man of God. When the Alter Rebbe asked his jailer to allow him to leave the dungeon in order to say the Kiddush Levana prayer on the new moon at its proper time, the jailer hesitated. If he would be caught allowing a prisoner to emerge from the dungeon against the rules, he would be killed. After some negotiation, however, the jailer agreed to allow the Alter Rebbe to pray outside as he requested, under one condition: “Give me a written guarantee that I will live a long life of wealth and honor in this world, and I will allow you to go outside,” he said to the Alter Rebbe.  And the Alter Rebbe actually did write out a promise for a long life of wealth and honor in this world and gave it to the jailer.

A promise for long life is no simple matter –even for a tzaddik like the Ba’al Shem Tov. It requires a dimension of self-sacrifice. Nonetheless, the Alter Rebbe was willing to make this self-sacrifice in order to pray the Kiddush Levana prayer outside at the right time.

After receiving his guarantee, the jailer led the Alter Rebbe outside to an uncovered courtyard from where he would be able to see the moon. “It is now eleven-thirty,” he said to the Rebbe. “At midnight the new guard comes on duty. You must be back inside by then. If the new guard realizes that I allowed you outside, I will be in danger and you will certainly be in even more danger.” The Alter Rebbe began to say the Kiddush Levana prayer with deep enthusiasm. Half an hour went by and he did not finish. His prayer went on and on. But the new guard did not show up. When the Alter Rebbe completed his prayer, more than an hour had passed. The jailer was livid but could do nothing. At the second that the jailer locked the Alter Rebbe into his cell, the new guard arrived.

The new guard, who was over an hour late, knew that if the first guard would report him, he would be in trouble. He fell at his feet, begging him not to report him, and explained: “I don’t understand what happened to me. For twenty years, I have been taking the same route from my home to the prison every night. I have never lost my way. Tonight, when I left my home, I didn’t know the way. I began walking from one place to the next, getting more and more confused. Only now, after over an hour – I finally found my way.” The first jailer, understanding that a miracle had just taken place, promised not to report his tardy replacement.

How did this miraculous story become known? Forty or fifty years later, some of the chassidim of the third Lubavitcher Rebbe, the Tzemach Tzedek, were researching the imprisonment of the Alter Rebbe. They went to the archives of the prison where the Alter Rebbe had been jailed and bribed the clerk there to open the archive for them. They wanted to uncover every detail of the Alter Rebbe’s imprisonment. “Wait a bit,” said the clerk. “Soon the general responsible for the archives will come here to perform a short check of the archives. He only comes once a month and then you will have a full month to dig deep into the archives and find what you are looking for.”

The chassidim waited and sure enough, the general came, performed a perfunctory check of the archives and left. The clerk opened the archive and the chassidim began turning piles of papers over, searching for documents about the Alter Rebbe. Suddenly, the door opened again and in walked the general. He had forgotten something in the archive and came to retrieve it. The chassidim were caught red-handed. They didn’t know what to do and simply fell at the general’s feet. “We did not come to do anything against the law,” they begged. “We are Chabad Chassidim. Two generations ago, our Rebbe was imprisoned here and we are searching for information about what happened during his imprisonment.”

Much to their amazement, the general’s face lit up, and instead of having them dragged off to prison, he invited them to his private room, where he began his story. “I was the jailer of your first Rebbe,” he told the flabbergasted group of chassidim, relating what happened that night of Kiddush Levanah. “Your Rebbe’s promise to me was completely fulfilled. I am an old man, a general and I enjoy wealth and respect”. The general removed the Alter Rebbe’s handwritten guarantee from his drawer, showed it to the Chassidim and related how it was fulfilled:

“I was a simple jailer, and after some time, I was transferred to guard duty at the gates of the prison. One day, as I was standing at the gate, the carriage of the Czar himself came by. Inside the carriage were the Czar and his family. Suddenly, the door of the carriage opened and one of the Czar’s sons was about to fall out. I ran and caught the child, saving him from serious injury and possible death. The carriage stopped, the Czar exited and asked me,

‘Are you the guard here at the gate?’

‘Do you know that you deserve the death penalty for leaving your post?’ he said.

‘Even though I deserve the death penalty,’ I answered, ‘I am willing to die in order to save the son of the Czar.’

When the Czar heard my answer, he said to me, ‘If so, I will make you a general. That is a fitting reward for someone who performs such a deed’.

“The problem was that I had no military training”, the general continued, “so the Czar made me an honorary general and gave me a job that does not require military knowledge. I am the general of the archive and have lived a very long life of wealth and honor,” he concluded.

Kiddush Levana is a very special mitzvah. Our Sages call this mitzvah, “Kabbalat panim” – reception – for our Father in Heaven. What is so special about this mitzvah? It is a messianic mitzvah, the revelation of the King Mashiach, “David melech Yisrael chai v’kayam”/ “David, the King of Israel lives and exists”. The Nation of Israel is likened to the moon, counts its calendar according to the moon and in the future will be renewed like the moon.

From the first part of this story, we see how dear the mitzvah of Kiddush Levana was to the Alter Rebbe. In our times, the Lubavitcher Rebbe encouraged everyone – including women – to perform this mitzvah. Who was at work behind the scenes of this story, causing the guard to be posted at the gate and having the Czar’s son fall? The Alter Rebbe. But there is a deeper dimension here. The Alter Rebbe imbued his jailer with a pinch of his own self-sacrifice, which gave him the idea to tell the Czar that he was willing to sacrifice his life for his son. It all began with the Alter Rebbe’s devotion to Torah and mitzvot in general, and particularly to the mitzvah of Kiddush Levana – permeating all the space and people surrounding him with a bit of his own self-sacrifice.

Photo by Jim Strasma on Unsplash

The Beit Aharon of Karlin: The...

Q: How do we repent

Print this article Excerpted and