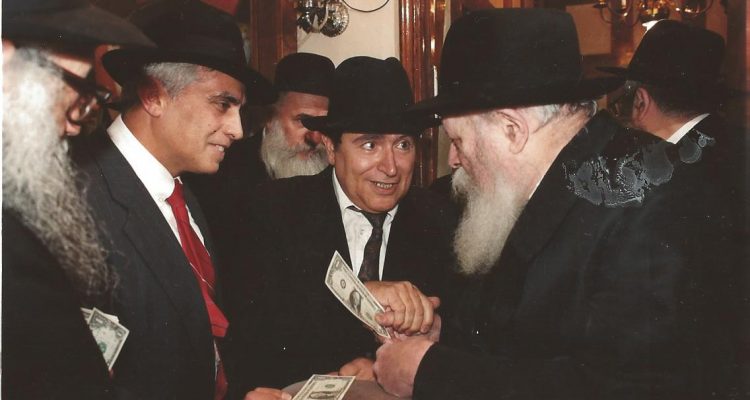 The Lubavitcher Rebbe: A Chassid with all the Powers of his Soul

This story took place after the Lubavitcher Rebbe’s leadership had already become known for its special character – with its  campaigns, the Rebbe’s special endeavors for matters pertaining to the entire Jewish People and his focus on the redemption and Mashiach.

Rabbi Chaim Hakohen Gutnick, o.b.m., former head of the Beit Din of Melbourne, once asked the Rebbe if he should change his British-style rabbinical hat to a regular Chabad-style hat so that he would look like a chassid. The Rebbe answered: True, one of the Chabad Rebbes expressed that he was jealous of the garments of the chassidim of Poland, but if they would show him a chassid from the previous generations, he would be able to immediately know if he was a chassid of the Alter Rebbe, the Mittler Rebbe or the Tzemach Tzedek. Not according to his apparel, but according to the matter to which he enthusiastically devotes himself (in Yiddish, koch zich).

The Rebbe continued: My chassidim are enthusiastically devoted to three things:

The three items that the Rebbe stated encompass all the levels of the chassid’s soul.

The mivtzo’im parallel the powers of implementation and action in the soul—the behavioral powers of the soul, associated with the sefirot of victory, acknowledgment, and foundation (netzach, hod, and yesod). The initiative for implementation comes from victory, which combined with submission to or acknowledgment of the Rebbe’s instructions transforms every chassid into a pious individual, who is described as, “a foundation of the world”; it is the pious, the tzaddikim, who sustain reality, as in the Rebbe’s words that the mivtzo’im strengthen the world’s existence.

Jewish pride begins with an individual sense of personal lowliness, which is then complemented by the positive pride shared by the members of an elite military unit. In all, Jewish pride builds upon the faculties of the heart. The public struggles that the Rebbe took upon himself derived from the depths of his heart and touched upon areas that were especially dear to him. This is the level of the emotive powers of the soul, the sefirot of lovingkindness, might, and beauty (chesed, gevurah, and tiferet). In short, the boundless love of Israel stemming from Loving-kindness (on the right axis) brings about the firmness of Might (from the left axis) when steadfastness is needed in the struggles; the two are then balanced by the sefirah of beauty (of the middle axis).

The main innovation found in the Rebbe’s teachings is that the redemption and Mashiach are the essential points of the service of the Chabad intellect throughout the generations. The Rebbe revealed in a letter that consciousness of the redemption and Mashiach had accompanied him from his earliest years, when he began attending school, and even earlier. From that point on, he longed for the redemption and contemplated when it would come about, it would become possible to apply the verse, “I thank You, God, for being angry with me” to all the tribulations of the exile as an ultimate consolation. This Chabad consciousness focuses the chassid and permeates all his thoughts, speech, and action with the ultimate purpose of Creation—the coming of Mashiach. This issue is related to the intellect and the intellectual sefirot in the soul: wisdom, understanding, and knowledge (chochmah, binah, and da’at). Wisdom, which is described in the Zohar as a “penetrating point” turns the chassid into someone firmly permeated with the point of Mashiach and the redemption; the fire of understanding keeps his thoughts constantly brewing; knowledge focuses and concentrates the mind on the issue.