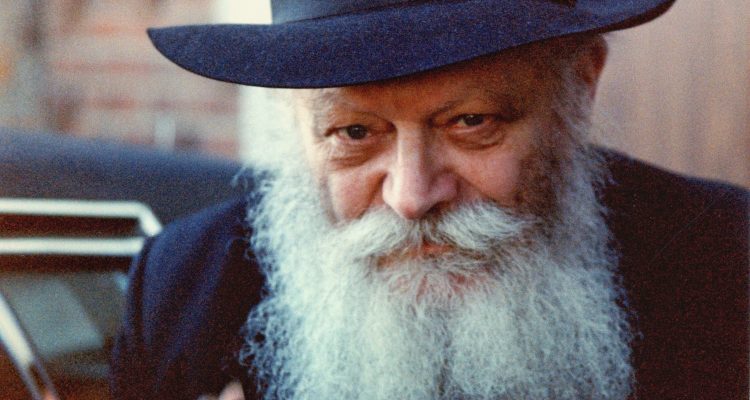 The Lubavitcher Rebbe: Connecting with Thought

A story about Rabbi Menachem Mendel Schneerson, the revered and beloved 7th Lubavitcher Rebbe, whose yahrtzeit is the 3rd of Tamuz.

After a number of years, Josh and his wife were finally blessed with their first child. Their joy knew no bounds. But just a few short minutes after the birth, a doctor entered the delivery room and sorrowfully announced to the parents that their baby had a serious eye condition, which would most likely render him blind. The only small chance that they had to prevent the blindness to a certain extent would be an operation – which was immediately scheduled for two days later. The crushed mother remained in the delivery room, while the father went to sit outside.

A Chabad chassid, an emissary of the Lubavitcher Rebbe, had set up a tefillin-donning stand near where Josh was sitting. It was a Friday. “Would you like to put on tefillin?” he asked Josh, who was Jewish but not connected.

“Just leave me alone,” Josh replied. “I’m not into that.”

The chassid saw that Josh was sad. “What’s wrong?” he asked.

“Just leave me alone,” Josh replied. But the chassid kept trying. After a few more questions, Josh told the chassid about his new baby.

“In a case like this, we have to immediately phone the Lubavitcher Rebbe and request his blessing,” the chassid said.

Josh had never heard of the Rebbe and had no idea how to request a blessing, but the chassid was adamant.

“You know what?” Josh finally broke down. “You take care of it. Go home, call the Rebbe and ask for a blessing.”

The chassid went home to place the long-distance call, but could not get through. He tried all day Friday but was unsuccessful. Finally, he returned to the hospital and told Josh that he hadn’t managed to speak with the Rebbe’s office to request a blessing.

This chassid was originally from Russia, during the era when there was no communication from behind the Iron Curtain. “Do you know what we chassidim used to do in Russia when we had a problem and could not communicate with the Rebbe?” he turned to Josh.  “We discovered that we could communicate with him through our thoughts. We would simply think about the Rebbe in a very focused manner while requesting a blessing or advice – whatever we needed. It worked very well in Russia. So now, when we haven’t managed to get our call through, let us both connect to the Rebbe in our thoughts, both of us, together. We will ask the Rebbe for a blessing for your baby.”

If Josh hadn’t been feeling so miserable, he would have laughed. But the chassid continued unperturbed. He removed a picture of the Rebbe from his pocket and showed it to Josh. “This is the Rebbe,” he told him. Focus on his picture and ask him for his blessing and prayers to God for your baby.”

“You do it,” said Josh. The chassid did it, with Josh looking on.

Shabbat was approaching, and the chassid went home. On Sunday morning, he returned to the hospital and saw Josh – who was looking very happy. “This morning,” Josh related, “just before the operation, the doctors came in to tell us that what they had diagnosed on Friday was wrong. There is just a small problem, and it is most likely that our baby will be able to see.”

Josh didn’t think it had much to do with the Rebbe, but left it at that.

Josh was friendly with one of the Orthodox Jews at the convention. “My son’s bar-mitzvah is approaching,” he told Josh. “I am flying to New York with my son for the day to get a dollar and blessing from the Lubavitcher Rebbe. (The Rebbe would give dollars for charity and blessings to thousands of Jews every Sunday). Why don’t you join me?”

“No thanks,” Josh answered.

Josh agreed and brought his wife and now two-year-old baby along.

In line, waiting for the dollar from the Rebbe, Josh asked his friend not to say anything to the Rebbe about him. He wanted to remain completely anonymous.

“No problem,” his friend replied. “I will go first with my son, and then you can follow. I won’t say a word about you.”

The Rebbe showered many blessings upon the bar-mitzvah boy. Josh followed, with his son in his arms. The Rebbe did not say anything to him, beyond two words when handing him the dollar, “Blessing and success.” But then, unexpectedly, the Rebbe looked at the child, moved his finger back and forth in front of his eyes, and when he saw that the child followed his finger, smiled.

Josh was totally shocked and eventually became a Chabad chassid. [1]

Connection to the Tzaddik in Thought, Speech and Action

This story shows us how we can connect to a tzaddik with the power of thought. Now, after the third of Tamuz, the main way to connect to the Rebbe is with our thoughts.

Connecting to the Rebbe through Thought

There is also communication with speech. When we go to the burial place of a tzaddik, we connect with him and can actually speak to him. This parallels the Lower Garden of Eden.

Now, after the third of Tamuz, the main place to seek the Rebbe and communicate with him is in the Upper Garden of Eden, with the power of our thought. This depends on our ability to picture the tzaddik in our minds and communicate with him. It is a special power that resonates with the third of Tamuz – to reach the Garden of Eden of the World of Creation.

[1] This story was told by Rabbi Buket, who met Josh at the Rebbe’s resting place. Josh told him the entire story, which happened over twenty years ago.