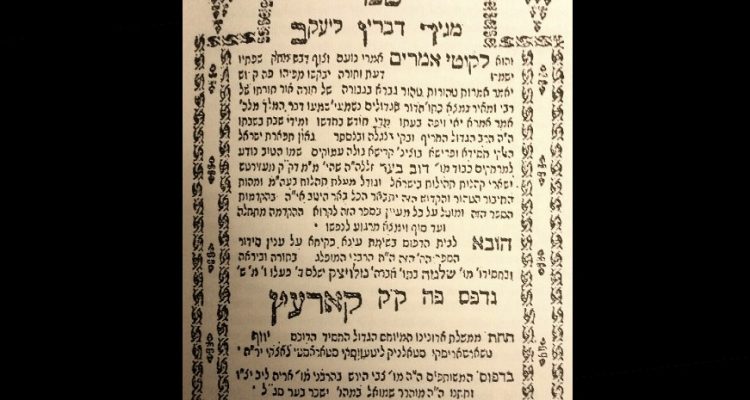 The Maggid of Mezritch: Who is “I” and Who am I?

Rabbi Dov Ber of Mezritch, known as the Maggid of Mezritch, was the greatest disciple of the Ba’al Shem Tov. He was born in Lukatch, Ukraine. His father, Rabbi Avraham, was descended from the Mishnaic sage, Rabbi Yochanan Hasandlar, and generations before, from King David. As a child, Rabbi Dov Ber was obviously brilliant and his father sent him to study Torah in the yeshivah of the Pnei Yehoshua (Rabbi Yaakov Yehosuha Falk) in Levov. After his marriage, he was a teacher in Toltshin and began learning Kabbalah. Later, he was a maggid (a preacher) in a number of villages.

Unlike his teacher, the Ba’al Shem Tov, who traveled from place to place, the Maggid stayed in Mezritch and from there sent his students to teach Torah and establish centers of chasidic life throughout Russia, Poland, and even Germany. A few months before he passed away, the Maggid moved to Anapoli due to a plague that had broken out in Mezritch. He passed away on 19 Kislev 5633 (1772) and is buried in Anapoli. The great chasidic aliyah to the Land of Israel came from the Maggid’s study hall, led by his disciple, Rabbi Menachem Mendel of Vitebsk who made aliyah in 1777. Among the Maggid’s other famous disciples were his son, Rabbi Avraham the Angel, the Alter Rebbe of Chabad, the brothers, Rabbi Zusha of Anapoli and Rabbi Elimelech of Lizhensk, Rabbi Aharon the Great of Karlin, the brothers Rabbi Pinchas Ba’al Hahafla’ah and Rabbi Shmelkeh of Nikolsburg, Rabbi Yehudah Leib Hakohen, Rabbi Ze’ev of Zhitomer and many more.

One of the great disciples of the Maggid once yearned to hear some Chasidic teachings from his Rebbe. He journeyed to his home, arriving there in the middle of the night. He was so thirsty to hear some words of Chasidut that he disregarded the late hour and knocked on the window of the Maggid’s home.

“Who is there?” asked the Maggid.

The disciple, who assumed that the Maggid would recognize his voice, simply answered, “It is I.”

“There is only One who can say ‘I,’” said the Maggid to his student. “The Blessed Holy One [about Whom the Torah writes]: ‘I, I am He.’”[1] The disciple heard the words of his great rebbe, his thirst for words of Chasidut was quenched, and he turned around and journeyed home.

While the Ba’al Shem Tov led the Chasidic movement, Chasidut was primarily characterized by powerful, constant cleaving to God, which the Ba’al Shem Tov demanded of his disciples and of himself. In the teachings of the Maggid of Mezritch, though the cleaving is still present and central, a new foundation emerges: the nullification of the “I,” or selflessness (bitul). This concept, which in the teachings of the Ba’al Shem Tov is included as part of the quest for cleaving to God comes into its own in the teachings of his disciple, the Maggid. As an example, let us consider how the Maggid explains the well-known mishnah from Avot that reads, “One who walks along a road and studies, and interrupts his studying to say, ‘How beautiful is this tree… the Torah considers it as if he had forfeited his life.’”[2] The Maggid’s interpretation is that the tree symbolizes the Torah scholar himself. Hence, the mishnah’s hermeneutic meaning pertains to a scholar who interrupts his study because he is thinking about himself, thinking that he is a wonderful tree that has grown from the Torah. But learning Torah is an act of cleaving to God, which he has now interrupted because of his pride in himself and in his Torah study. Obviously, this causes him to lose his connection to the source of all life, God. In a sense, he has “forfeited” his life, i.e., his connection with eternal life.

Selflessness strengthens and actualizes the cleaving taught by the Ba’al Shem Tov. Torah study with cleaving to God is the primary service of God. It can, however, all be lost with even a single moment of egocentric sentiment. The Rebbe Rayatz (the sixth Lubavitcher Rebbe) also writes that the disciples of the Maggid did not use the Yiddish word for “I” pronounced Ich (אִיך), without mentally concentrating on its numerical value, 31, which is the same as the value of God’s Name, pronounced Kel (אֵל), thereby recalling the Maggid’s words that, “there is only One who can say ‘I.’” From Yiddish, which is a secular language, the disciples created sacred connotations for the Almighty. They transformed egocentric consciousness into consciousness focused on the Divine. This process of transition from cleaving to selflessness reaches its apex with the Alter Rebbe. What was relatively implicit in the Ba’al Shem Tov’s teachings became explicit in the Maggid of Mezritch’s Torah, and then became the primary feature of Divine service in the teachings of the third generation.

Beyond his advocating for individual, inner focus in the service of God, the Maggid also wished to disseminate Chasidut and precipitate essential changes throughout the Jewish world. First and foremost, the Ba’al Shem Tov and his disciples aspired to hasten the coming of the Mashiach as much as possible. Would cleaving to God and selflessness be enough to accomplish this goal?

The Maggid was very intent on bringing the redemption. He began moving things in Heaven. He worked hard and caused a ruckus in Heaven. The Heavenly entourage came to him and said, “Why are you making noise in all the worlds? Who are you, anyway, that you think that you can bring the Mashiach?”

“I am the tzaddik of the generation, and so I have the power to bring the redemption now and not at a later date,” the Maggid answered.

“Who can testify that you are the tzaddik of the generation? Why should we believe you?” the Heavenly entourage countered.

“My disciples will testify that I am the tzaddik of the generation,” the Maggid said.

The Maggid then went to his holy disciples, sat them all down before him, and asked them directly: “Am I the tzaddik of the generation?” The holy disciples, dumbfounded and taken aback by his question, could not open their mouths. The Maggid looked at them with great sorrow and said, “We missed an opportunity to bring the Mashiach.”

From this story, we learn that besides the basics of cleaving to God and selflessness discussed above, sometimes assertiveness and self-praise are necessary. The sefirah of foundation, which alludes to the tzaddik as the foundation of the world, is referred to in Kabbalah as the embossed seal, as Rabbi Shimon Bar Yochai said about himself, “I am the sign [the seal] of the entire world.”[3] The tzaddikim of the generations, each in his unique fashion, say, “I am the sign, the seal that exemplifies and guides all Jews in their conduct.” Every generation needs a tzaddik who can openly express his righteousness and people who can testify to that righteousness. Even if there are generations in which the tzaddik’s disciples cannot testify to his righteousness, the Maggid’s holy disciples could have done so. But they missed the opportunity. Of course, to take such aggressive action, which is necessary, in order to bring the Mashiach, a person must be in a state of cleaving to God and selflessness, which both characterize the holy Maggid. As Rebbe Nachman of Breslev said, “Only an authentically humble person, like Moses, is capable of writing about himself, ‘And the man Moses was very humble,’[4] and remain the humblest of all men. The Maggid’s pride in his righteousness stemmed from his cleaving to God and his selflessness. It became possible specifically through them. When we harmoniously combine cleaving to God and selflessness with lowliness and assertiveness, we can take action to bring the Mashiach.

[3] Zohar 1:225a. See Ba’al Shem Tov al HaTorah, Bereishit 30: The meaning of the verse, “Fiery angels [seraphim] stand above him” is that the fiery angel is the tzaddik who burns with love of God, because He stands above them…. Meaning, that a person should know that he has a part of Heaven in him, and by cleaving his thought above, he can know what is happening above. For all that comes to pass Above originates in his [the tzaddik’s] mind, as Rabbi Shimon Bar Yochai said, ‘I am the sign of the entire world,’ meaning that all the traits that are awakened above are first awakened by the tzaddik here below.