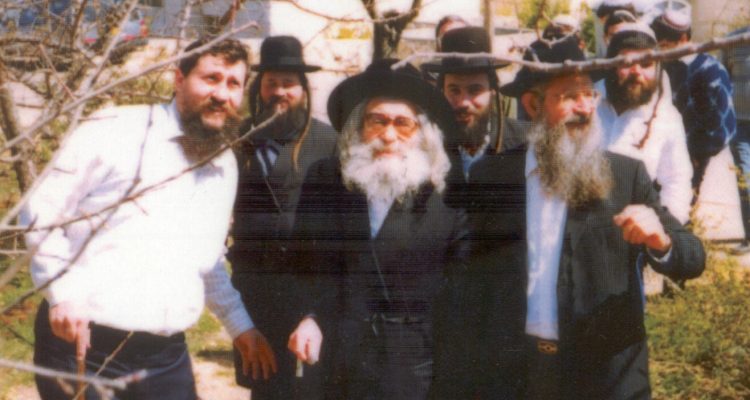 The Pnei Menachem of Gur: Healing with Words

Rabbi Pinchas Menachem Alter of Gur, the Pnei Menachem, was born in 5686 (1926). He was the youngest son of Rabbi Avraham Mordechai Alter, the Imrei Emet of Gur. After Poland was conquered by the Nazis, he escaped Europe together with his father and made aliyah to the Land of Israel on Pesach 5700 (1940). Rabbi Pinchas Menachem was appointed to head the Sefat Emet yeshivah by his brother, the Beit Yisrael, who was then serving as the Gerrer Rebbe. The Pnei Menachem served as a member and the president of the Torah Scholars Council and as the Chairman of the Agudat Yisrael political party. He was known for his strong opposition to relinquishing any parts of the land of Israel to foreign hands.

After his brother, the Lev Simcha, passed away in 5752 (1992), the Pnei Menachem became the Rebbe of Gur and served in this capacity for three and a half years. His prayers and Torah dissertations were lengthy and filled with enthusiasm. The Pnei Menachem would conduct lengthier conversations than the two previous Rebbes of Gur with those who came to ask his counsel. He lived modestly his entire life. The terror attacks in Israel after the Oslo Accords had a deleterious effect on his health and he passed away just after Shushan Purim, on the 16th of Adar, 5756 (1996). His assistant related that before he passed away, he said, “The death of tzaddikim atones. The people of Israel are in a difficult state. Self-sacrifice is needed for the people of Israel. I see that it is hard to take spiritual action here. It will be possible to work much more from Above.” Indeed, the wave of terror attacks stopped after his death.

One of the chassidim of the Pnei Menachem came to him toward the end of the month of Elul and told him that he had to undergo an organ transplant. The date for the transplant was set for a few days after Simchat Torah. The Rebbe said, “We will soon be greeting the new year. Why make plans for then? Surely, you will recover, and you will not need the surgery…” The chassid was very moved and returned to the Rebbe after Rosh Hashanah. “Should I cancel the appointment that I had made for the transplant?”

The chassid enjoyed the holidays with happiness and relief. Before Simchat Torah, he came to the Pnei Menachem once again. “Now that you are healthy,” said the Rebbe, you can rejoice with the holy Torah even more.”

As would be expected, the chassid had never celebrated such a joyous Simchat Torah. But after the holiday was over, when he came again to his Rebbe to bid him farewell, the Rebbe delayed him and said: “You will have to have the transplant, but there is no need for worry. You will recuperate swiftly and will be healed of your entire problem. When I saw how terribly tense you were about the transplant, I found a way to give you at least a few days of calm and happiness.”

“What should I do now?” the astounded chassid asked. “I have already cancelled my appointment for the transplant.” “Check,” the Rebbe answered, “perhaps it is still available.” Amazingly, it turned out that the surgery appointment was still available. The transplant was a success and the recuperated, healthy chassid came to the Pnei Menachem for his blessing. The Rebbe received him warmly and said: “While it was decreed in Heaven that you had to undergo the surgery, the agitation that accompanied it was not decreed upon you. I told you to cancel your appointment in order to encourage you. But I immediately called your doctor and told him to save the appointment for you….”

In a rather Purim-like turn-about, the Rebbe gave his chassid a wonderful experience of joy over the holidays.

The Pnei Menachem did not only concern himself with the serenity of his followers, taking the concern for their health on his shoulders. He did so for their families, as well:

One of the Pnei Menachem’s chassidim came to New York to spend Yom Kippur with his rebbe, while his family remained in Belgium. A short time before the start of the fast, the family called the rebbe and asked him to pray for their baby, who had just fallen out of window and was in serious condition. The rebbe gave instructions not to inform the father so as not to cause him sorrow. “Even though it is worthwhile for the father to pray for his son, in this case, I will pray in his stead.” The baby’s name was written on a note that was before the rebbe throughout that Yom Kippur and he continued to counsel the family throughout the complex rehabilitation process. Sometimes he told them that they did not have to accept the doctors’ misgivings and sometimes he presented his own misgivings. Even when those misgivings came true, the rebbe continued to promise the family that the baby would have a complete recovery. And miraculously, he did indeed completely recover.

Even in the case of severe illness, the Pnei Menachem would shower the ill with words of encouragement and strength – even when he was aware that the patient’s days were numbered.

Once, he spoke with an ill person on the phone with such confidence that the person was convinced that his illness was not serious at all. After he finished the conversation, the Pnei Menachem released his pent-up emotions, sighed deeply and did not eat anything until the next day. Afterwards he said, “I knew his actual condition, but I was not willing for him to pass away in such sadness.”

The Pnei Menachem’s approach is supported by a famous story about Rabbi Moshe Leib of Sassov.

Once Rabbi Moshe Leib of Sassov visited a person on his deathbed. When he saw how despondent he was about his condition, he rose and vowed to him that he would recover. The ill man felt comforted and did regain some strength, but after a few days, his illness intensified, and he died.

Rabbi Moshe Leib’s students asked him about his oath, which seemed to have been for naught. Rabbi Moshe Leib answered that just as we desecrate the Shabbat if it will lengthen a person’s life just a bit, so, “it is fitting for Moshe Leib to lose his World to Come so that a Jewish soul can live a bit longer.” Rabbi Moshe Leib felt that if the ill person would have spent his final days fearing death, his life would have been shortened.

Rabbi Moshe Leib’s approach is the secret of chashmal, the three-stage process taught by the Ba’al Shem Tov. The ill person feeling pain, called chash in the Talmud, is in a state of submission. The tzaddik (who represents circumcision, called brit milah) is the mal, separating the ill person from worry. Sometimes, the resulting salvation (the appearance of the so-called 370 lights (שע נְהוֹרִין) is complete and absolute and constitutes the sweetening of the evil of the illness with speech (milul, also from the root of mal). Sometimes, the sweetening is for a short time only.

The process of chash-mal-mal corresponds, as above, to the basic model of Divine service, as taught by the Ba’al Shem Tov: submission-separation-sweetening. Each of the stages inter-includes all three stages. A short-lived recovery is considered the sweetening within submission; it is the sweetening of the bitterness of the ill person’s final days. Moreover, even if in our eyes, the tzaddik’s promise helped for only a short time, certainly its influence carries over into the next world, sweetening the judgment on the soul of the deceased and helping him in the upper worlds. The absolute sweetening, the mal within the mal, takes place when the tzaddik’s words and the chasssid’s trust in them affect a complete recovery.

Question: My wife and I

Question: Why are so many