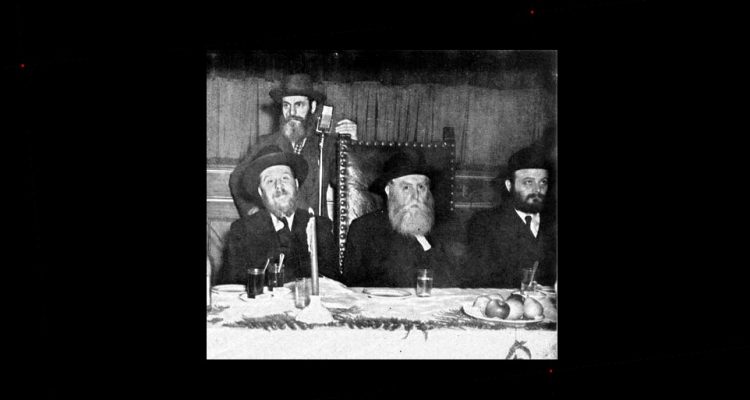 The Rebbe Rayatz: Representing his Father

The Rebbe Rayatz, Rabbi Yosef Yitzchak Schneerson, the sixth Lubavitcher Rebbe, was born to his father, the fifth Lubavitcher Rebbe, Rabbi Shalom DovBer (The Rashab) on the 12th of Tamuz, 5640 (1880). At the age of eight, he was listening to his father’s Chassidic discourses. At the age of eleven he began to don tefillin. When he was fifteen, his father brought him to the burial site of the third and fourth Lubavitcher Rebbes, the Tzemach Tzedek and the Rebbe Moharash, and appointed him as his representative for all issues of public import. At the age of seventeen, the Rayatz married Nechamah Dinah and became the director of the Lubavitch Yeshivah Tomchei Temimim, founded by his father. In 5673 (1913), the Rayatz participated in a rabbinic council gathering to help defend the Jews against the blood libel perpetrated against Mendel Bayles.

In 5680 (1920) the Rebbe Rashab passed away, just a short time after the start of the Communist revolution. The Rebbe Rayatz was appointed to succeed his father. He worked with focused determination for the sake of the Jews of Russia and was arrested by the Russian secret police for his efforts on the 15th of Sivan 5687 (1927). The Rebbe was sentenced to death without a trial. After international pressure, the death penalty was transmuted to exile. The Rayatz was freed from prison but sent to exile in Kostroma on the third of Tamuz. The international pressure intensified, and on the 12th of Tamuz the Rebbe Rayatz was given permission to return home. Due to a local holiday, however, he was actually released the following day, on the 13th of Tamuz. Since then, Chabad chassidim commemorate both the 12th and 13th of Tamuz as the Rebbe Rayatz’s “Holiday of Redemption.”

The Rebbe returned to his home in Leningrad, but fearing that he would be arrested again, he moved to the town of Malchovka and then to Riga and from there to Warsaw. In Av 5689 (August 1929) the Rayatz visited Israel for two weeks. From there, he journeyed to the USA for a year-long trip. On the 22nd of Tevet 5700 (1940) the Rayatz was rescued from occupied Warsaw via Berlin and Riga. From there he continued to Stockholm and from there he sailed to the US, where his boat docked on the 8th of Adar Beit.

When the Rayatz turned twenty, his father, the Rebbe Rashab, charged him with intervening for the Jews as his representative in the upper echelons of the Russian government. There are tzaddikim who draw abundance from Above down into the world, without much regard for the world, itself. But there are messianic tzaddikim, who in addition to their familiarity with the upper worlds, know how to take action in this world with its own methods. This was the modus operandi of the Rayatz.

Once the Rebbe Rashab sent the Rayatz as his emissary on a mission to Moscow. At that time, Jews were prohibited from living in Moscow. But there were a few important merchants who were chassidim of the Rashab who had received special permission from the government to live in the city. Those wealthy men had their own minyan (prayer quorum). When the young Rebbe Rayatz prayed with them on Shabbat, they asked him to say a chassidic discourse, as was the custom of chassidic rebbes. Initially, the Rayatz refused, but the chassidim continued to entreat him. As he was a young man and they were elder chassidim, he ultimately acceded to their request. Rebbe Yosef Yitzchak walked to and fro in the room, sat down and gave a chassidic discourse that amazed his listeners.

Some time later, one of these chassidim was travelling through Lubavitch on business. As he was an important chassid, he was immediately granted a private meeting with the Rebbe. He related to the Rebbe how successful his son the Rayatz had been in his efforts for the Jewish People and then told him in detail about the discourse. The Rebbe Rashab asked what his son said, and the chassid repeated the main points of the discourse with great amazement. The Rebbe Rashab was also most impressed when he heard the discourse, but he said nothing.

The following Shabbat, the Rebbe Rashab gave over a chassidic discourse regarding, “three methods of understanding the attribute of will.” This was a new topic in Chassidut that had not been previously discussed. The custom in Lubavitch was that the chassidim would review the Rebbe’s discourse on Friday night and then on Shabbat morning, they would have permission to enter the Rebbe’s room to hear the discourse again so that they would remember it well by heart and would be able to write it down after Shabbat. The Rashab’s son, the Rayatz, would enter his father’s room alone on Saturday night, and his father would ask him if he understood the discourse. Every Shabbat, the Rayatz would answer that he did not understand so that his father would repeat it to him with more explanations. But on this particular Saturday night, when his father asked him if he understood, he answered that he did.

Why is your answer different than usual?” asked the Rashab. The Rayatz told him that this was actually the discourse that he had given over in Moscow a few weeks ago…The Rebbe Rashab knew this, of course, for he had heard it from the chassid.

“Many years ago, I saw in a chassidic writing that there are three approaches regarding will,” said the Rashab. “Even with all the Chassidut that I had learned, I only knew of two approaches and for many years, I was troubled that I did not merit to discover the third approach. Just a short time ago, I discovered a writing in which the third approach was explained. This is how I learned it after many years. But from where did you know it?” he asked his son.

The Rayatz answered that he knew “from Shimon Ber’s head.” This was a common expression among the chassidim of that time, which was meant to avoid boasting over one’s Torah innovations, attributing them instead to the simple “Shimon Ber.” “That is fine,” the Rashab answered him, “but you must know that there is one condition for saying a chassidic discourse in public: For eight hours prior to the discourse you must tremble in fear, as in the verse, “and his knees were knocking together.”[1]

This story is a good example of the Rebbe Rayatz’s great wisdom. The concealed wisdom, the wisdom in his super-consciousness, had the power to create his Torah innovations. Then, his “supernal wisdom,” the conscious wisdom, opened the sealed fountain of the “concealed wisdom” and brought it down into his consciousness. The content of his discourse is even more wondrous, revealing a new “approach” and logical order regarding will, which the intellect is not generally capable of understanding, since will itself is part of the difficult to survey super-consciousness.

The Rebbe Rayatz admits to his father that he gave over a public chassidic discourse, a role generally reserved for the Rebbe alone. We can see from this the great extent to which the father and son acted and thought in a similar manner. Without this like-mindedness, the Rebbe Rashab would not have entrusted his son with such delicate and crucial matters of life and death in both the physical and spiritual realms.

The Rebbe Rashab relied on his son so much that when he sent him on his first mission, he ordered the elder, experienced chassidim not to interfere with the young man’s actions—neither in deed nor with advice. The most experienced chassid who had carried out perhaps tens of similar missions for the Rebbe, was not as proficient at knowing precisely what the Rebbe wanted as the young man, whose mind was drawn down from the mind of his father.[2] This is true for the public matters that are the framework for this story as well as for their wisdom itself, expressed by the fact that the Rayatz perceived his father’s new understanding of will.

The Rayatz’s wisdom is characterized by boldness. We see this from the action he took in Moscow with nullification to his father and understanding of his will, through pulling a chassidic discourse “out of his sleeve” and then confessing it to his father. Even though his son’s wisdom gave the Rashab great pleasure, he made it clear that wisdom must manifest as higher fear.[3] The Rashab underscored this with a verse from Daniel: Regarding the fear that Daniel’s prophecy wrought on those in his presence, the sages explain that their soul roots—meaning, the super-conscious part of their soul’s—saw, while all that they grasped was a concealed, inexplicable fear. This type of fear is wisdom, itself, which makes it possible to perceive true Divine Torah innovations.

[3]. The four letters of God’s essential Name, Havayah correspond to the four main sefirot—wisdom, understanding, beauty, and kingdom—as well as to the different aspects of love and fear in the order of: higher fear, higher love, lower love, and lower fear. Thus, wisdom corresponds to the higher fear:

Charging the World with Love

Modern society does not tolerate

Q: What is the Rabbi’s

The wisdom of Kabbalah unfurls