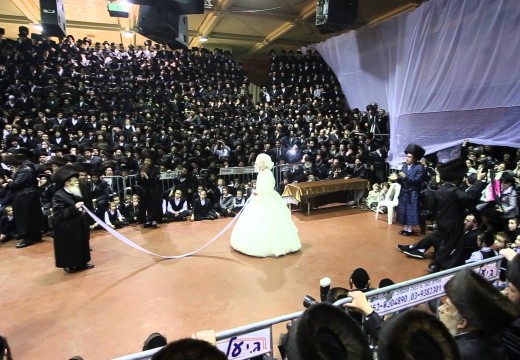 Rabbi Elimelech, the holy rabbi of Tosh (Nyírtass), was the son of the founder of the Tosh dynasty, Rabbi Meshulam Feish Segal-Lowy. When Rabbi Meshulam passed away on the 28th of Sivan, 5633 (1873), Rabbi Elimelech was still a young boy. His brother-in-law, Rabbi Yehosef Rotenberg of Koson (Mezőkaszony), succeeded his father. In the meantime, Rabbi Elimelech immersed himself in Torah study in his brother-in-law’s home. He married the daughter of Rabbi Yitzchak Isaac Weiss, Chief Rabbi of Svaliava (in Western Ukraine). Following his marriage, he and his wife went to live near her parents in Muncatsch (Mukachevo). In 5658 (1897), Rabbi Elimelech was appointed to succeed his father in Tosh, with the encouragement of his mentor, Rabbi Eliezer of Komarna. Rabbi Elimelech passed away on the 23 of Kislev, 5703 (1943).

When Rabbi Meir Yosef of Kerestir (Bodrogkeresztúr) married off his sister (after his father had passed away), the holy Rabbi Elimelech of Tosh participated in the traditional Sheva Berachot feast in honor of the bride and groom and was given the honor of reciting the blessings. When he reached the final, seventh blessing, he put the goblet of wine on the table, rose and began to dance before the bride. It is an ancient custom for the tzaddik to dance opposite the bride, each holding one end of a rope or belt.[1] One of the guests asked, “What was the holy rebbe thinking about during the dance?” Another guest answered that the rebbe was very happy that an orphaned girl had married. When he reached the seventh blessing, his joy overflowed, and he got up to dance.

When Rabbi Meir Yosef of Kerestir married off his eldest daughter, the holy Rebbe Elimelech of Tosh participated in the wedding. He danced the mitzvah dance before the bride, with a cigar in his mouth, for an entire half hour. He danced with such holy fervor that the crowd surrounding him was mesmerized, not removing their eyes from him, even though they were not his chassidim.

In both of these stories, we feel Rabbi Elimelech’s special affinity to bringing joy to the bride and groom. In particular, the Rebbe was fond of the ‘mitzvah dance,’ in which the close relatives and important guests dance before the bride. We can say that every ‘Elimelech’ throughout the generations is a reincarnation of the first Elimelech in history—Elimelech the husband of Naomi from the Scroll of Ruth. In every one of his updated versions, so to speak, he rectifies something else from his first incarnation.

It is here that we need to present what is a common theme in Chassidic thought: that even that which ends up manifesting as evil can, at its root, be good. The order of things is that first the negative, even evil version of a behavior or idea, or whatever else, manifests. It is only later that we can identify the positive and good version of that same thing. This is known as the principle of “the husk precedes the fruit,” building on the experience that you cannot get to the sweet inner core of a fruit without first going through the external, usually bitter and inedible husk or peel.

In this particular case, between the two sisters, Orpah had greater potential than Ruth. One allusion to this can be found in their names. In Orpah’s name, the second letter is a reish, the first letter of Ruth’s name. This reish then expands into Ruth’s full name (רות). But even though the husk is revealed first, it cannot develop into the rectified form of itself. Its potential remains untapped and undeveloped. For all her potential, Orpah—who ends up being a figure representing chaos—cannot shoulder the uncertainty that would necessarily accompany a decision to wander with her mother-in-law, Naomi. Thus, when Rabbi Elimelech danced before her, he elevated her to the level of holiness and connected her to her sister, Ruth, who also descended from the fields of Moab but, through her self-sacrifice, ascended to holiness.

Orpah and Ruth are both intrinsically connected with the coming of Mashiach. The first letters of their names are ayin and reish, which spell the name Er (ער), Judah’s firstborn son, considered a manifestation of unrectified, chaotic, preliminary energy. Er is considered a spark of Mashiach that was not fulfilled in reality. Instead of living up to his potential, Er (ער) became “evil” (רע) which means “’bad’ in God’s eyes.”[2]

As a rule, the path to the arrival of Mashiach is paved with difficulties and failures: The sin of Lot and his daughters (from whom Ruth the Moabite and Na’amah the Amonite, both grandmothers of future kings of Israel) were descended. Then there was the sin of Er and Onan, the story of Judah and Tamar and later, Elimelech’s self-imposed exile to Moab, upon which the sages heaped criticism. All of these less than complimentary situations, however, were orchestrated by God.

This is the secret of “I am asleep” (Song of Songs 5:2) in the exile “and my heart is awake(ער )” to seek and find holy sparks concealed specifically in Orpah (as alluded to in an additional verse in the Song of Songs 8:1, “I will find you outside”). With the marriage of Orpah and Ruth to the sons of Elimelech, from the tribe of Judah, the ascent of the spark of Er begins, on the way to the birth of King David, the Mashiach. Later, David kills Goliath, the son of Orpah. David’s nephew, Avishai the son of his sister Tzruyah,  later kills Orpah herself. By doing so, he breaks the stiffness of her neck—in Hebrew, Orpah is from the root of oref, which means ‘back of the neck’—and prepares her for a relaxed, joyous rectification during Rabbi Elimelech’s mitzvah dance.

In his euglogy for the Tosher Rebbe, Rabbi Hertzkeh Vider of Nyirtass related the following:

When the Tosher Rebber arrived in Kerestir for the wedding of Rabbi Meir Yosef’s daughter with his nephew, the rabbis there wanted to give Torah discourses during the wedding, as was traditional then. The Tosher Rebbe did not agree to this. He quoted the verse in Psalms (19:9), “God’s precepts are straight,” saying, “What can be rectified with Torah, can also be rectified with the continuation of the verse, ‘gladdening the heart.’”

Rabbi Hertzkeh continued his eulogy: “Tzaddikim would say that when they reach Heaven, they will not rest or be silenced until they bring the Mashiach. But when they reach Heaven, they are diverted by receiving the honor of teaching Torah. But you, esteemed Tosher Rebbe, who did not allow for teaching Torah at the wedding, will also not agree to teach Torah in Heaven – so please try to bring the Mashiach…”

The joyous process of the ascent of Orpah and Ruth will be completed with the arrival of Mashiach, may it be speedily in our days, when the bold aspirations of the lights of chaos will fulfill themselves by means of taking action within the vessels of rectification. In Hebrew, the letters of Mashiach (מָשִׁיחַ) can be permuted to spell both “he will be happy” (יִשְׂמַח) and “he will make others happy” (יְשַׂמַּח). In the spirit of the words of Rabbi Hertzkeh in his eulogy, the Mashiach’s Torah is a joyous Torah that should be brought “with an abundance of song and music-making” (the last words that we heard from the mouth of the Lubavitcher Rebbe). The celebration of the bride and groom—particularly their joy of marital union, in which the husband “remembers” the wife—bringing to the fore God’s promise to redeem His nation with love. A person whose every action is ripe with the intent of bringing the redemption by adorning the bride, i.e., the Jewish people, with Torah, does not allow mere discourses to divert his attention from the ultimate goal of having God seeking to reunite with His people, after which a “new [and joyous interpretation of] Torah” will be revealed, thereby highlight that, “God’s precepts are straight, gladdening the heart!”

When we get a sense for the rectifications that Rabbi Elimelech affected with his dance before the bride—a dance that began with the history of the House of David and will reach its goal with the arrival of Mashiach—we too may stand mesmerized, watching him dance with holy fervor, anticipating the time when the dance will take its effect and we will all go together to the “Mashiach dance.” Perhaps, however, it is not enough just to look from the sidelines. To hasten the arrival of Mashiach, we also have to get up and dance!

[1]. See the video https://youtu.be/LExkqvRJpmw of Rabbi Elimelech’s grandson and eventual successor, dancing before his grandson’s bride in the traditional “mitzvah dance”