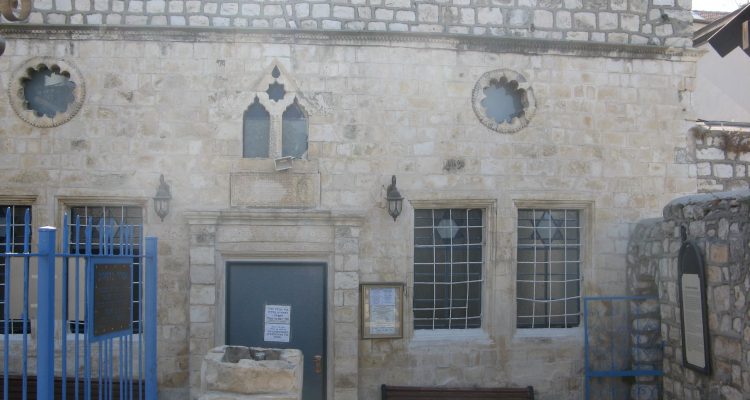 The Wondrous Mission of the Arizal”s Students

The holy Rabbi Yitzchak Luria (the Arizal) was born in Jerusalem in 5294 (1533). When he was a young boy, his father passed away and he moved with him mother to the home of his uncle in Egypt. In Egypt, he learned Torah from Rabbi Betzalel Ashkenazi, author of the Shitah Mekubetzet and from the Radbaz. While in Egypt, he delved deeply into the holy Zohar. Elijah the Prophet was revealed to him and he discovered a new, deep method in Kabbalah. As per the instructions of Elijah the Prophet, the Arizal made aliyah to Tzfat and taught his method of Kabbalah to Rabbi Chaim Vital, who wrote his teachings in book form. The Arizal’s most famous book, which includes the main points of his method, is “Eitz Chaim.’ The Arizal passed away at the early age of 38 and is buried in Tzfat. The Arizal’s method and teachings of Kabbalah have been accepted by all branches of the Nation of Israel until this very day.

The Arizal was the first to reveal awesome secrets of Kabbalah, never before revealed in the world. Not only was there prosecution against him in Heaven, but down on earth, as well, there were some tzaddikim and rabbis who thought that it was forbidden to reveal these secrets to the  public – and that even if  God had revealed those   secrets to him, he should just keep them to himself. There were even great rabbis who considered excommunicating him. The greatest rabbi who wanted to excommunicate him was the Maharshal, Rabbi Shlomo Luria, who was also a relative of the Arizal. The Maharshal was the Chief Rabbi of Lublin, the foremost center of European Jewry at that time. He was considered the Torah giant of his generation and he was very unhappy that the Arizal was revealing secrets of Kabbalah. He joined with the Ram”a – the famous commentary on the Shulchan Aruch, according to which we determine Jewish law and who lived in his community in Lublin, and added another important rabbi in order to have three rabbis necessary to excommunicate the holy Ari.

The Arizal saw all of this with his ruach hakodesh (Divine inspiration). In order to prevent the excommunication from ever happening, he sent two of his students – one, his distinguished student, Rabbi Chaim Vital, and an additional student – on a mission.  The Arizal did not take this action to preserve his personal honor. He was revealing the secrets of Kabbalah for a reason- to hasten the redemption – and this had to be safeguarded.

How were the Arizal’s students supposed to quickly get from Tzfat to Lublin? For that, the holy Ari arranged a cloud.

The students boarded the cloud at the Ari’s behest and quickly arrived in Lublin (performing another important mission on the way), just in time for the Friday afternoon prayers. Although they looked pious, nobody knew who they were.  When the Silent Prayer was over, the shaliach tzibbur leading the prayer waited for the Maharshal to complete his prayer, as was the custom. The entire congregation was respectfully waiting when one of the Arizal’s students said to the synagogue’s beadle, “Why do we have to wait for this rabbi, when all that he is doing now is thinking about the wheel of a wagon?” Prayer is the time to think about God, but this pious-looking man is saying that hundreds of Jews are waiting for the rabbi, who is thinking about a wagon wheel.

The beadle was very upset. They may look pious, but they are shaming the rabbi. As he did not know what to do, the beadle went to the rabbi, himself, told him what had occurred and asked him what to do. After all, insulting the rabbi is an insult to the Torah that he learns, and the rabbi must punish them.

The Maharshal carefully listened to the beadle and said not to do anything to the guests. Later, he explained that on every Friday afternoon, before he concludes the Silent Prayer and takes his three steps backwards, he reviews in his head all the rulings on Jewish law that he had handed over during that week to ensure that he had not erred, Heaven forbid. He related that he did this review at the end of the Silent Prayer, for then his head was the clearest. “At the end of the Silent Prayer,” he said, “I was thinking about one of the cases that I had this week, which revolved around a wagon wheel. So these two guests have ruach hakodesh. They knew what I was thinking.”

The Maharshal invited the two important guests to spend Shabbat with him in his home. When cutting the challah loaf after Kiddush, something strange happened. An ant had apparently crawled into the challah, and the Maharshal had cut it in half. It was an awkward moment. One of the guests, who was sitting next to the Maharshal took his scarf and passed it before the rabbi’s eyes. Suddenly, he saw the ant as if it was the size of a camel. The Maharshal was very taken aback. An ant in the challah was bad enough, but when it looked the size of a camel, it was truly frightening. The guest then took two challah loaves out of his large pockets. These were special loaves, still warm as if they had just been removed from the oven, similar to the shewbread in the Holy Temple. The pious guest told the Maharshal that these were gifts from his holy rabbi, the Ari. He continued to tell the Maharshal that they had come from Tzfat on a cloud. The Arizal had seen with his ruach hakodesh that there would be a problem with your challah, so he sent you two special, heavenly challah loaves, which have the holiness of the Temple shewbread.

The Maharshal began to wonder if it was really correct to excommunicate the holy Ari. He asked the two guests to accompany him to his cellar. The Maharshal himself was also a great Kabbalist – but he kept that fact hidden. He did not learn or teach Kabbalah in public. In the cellar, he began to expound upon a deep Kabbalistic thought.

The Ari’s students listened to the Maharshal’s explanation and then Rabbi Chaim Vital opened his mouth and just said the first verse of the Torah: “In the beginning God created the heavens and the earth.” At that moment, the Maharshal suddenly felt and saw that the heavens were created anew and the earth was created anew (as will be the case when the Mashiach comes – there will be new heavens and a new earth). The Maharshal understood that the power of the Torah of the student of the Ari was much greater than his own power. When he spoke, nothing was created, but when the student said just one verse, a new heaven and earth were created.

This is a wondrous story, from which we learn that sometimes a tzaddik must invest tremendous effort in order not to be misunderstood: “And you shall be clean from God and from Israel.” The greatest rabbi of the generation, the Arizal’s cousin, was planning to excommunicate him. In order to prevent that, and in order for the Maharshal to understand just who the Ari was, he performed an entirely supernatural act, thus revealing his stature.

Sometimes, not only does the tzaddik have to reveal his stature, but he must even glorify himself. In this case, this was in order to prevent his excommunication, which could have been very damaging for the Nation of Israel and postponed the redemption. For this reason, the Ari went to great lengths to publicize himself with supernatural means. He sent his students on a cloud and gave them shewbread. The Arizal also allowed his student, Rabbi Chaim Vital, to say words of Torah from which the Maharshal would see how a new heaven and earth were created. This is a very unconventional way of operating, relevant only to a tzaddik who has broad da’at, knows himself, and can use self-glorification (hitpa’arut, which shares a root with tiferet ), because Da’at is the inner dimension of the sefirah of Tiferet.

Even in the unusual circumstances when one must take revenge for God’s honor, it is only permissible when he has no personal enjoyment from it. According to Jewish law, in order to forestall any personal enjoyment, the rabbi should not personally take action. Rather, he should allow his students to carry out the mission, and he should not protest. A true talmid chacham who is forced to take revenge or has to glorify himself remains silent, allowing his students to act – while he, like a snake –has no personal benefit from it.

Q: What parts of the

Q: I used to sell