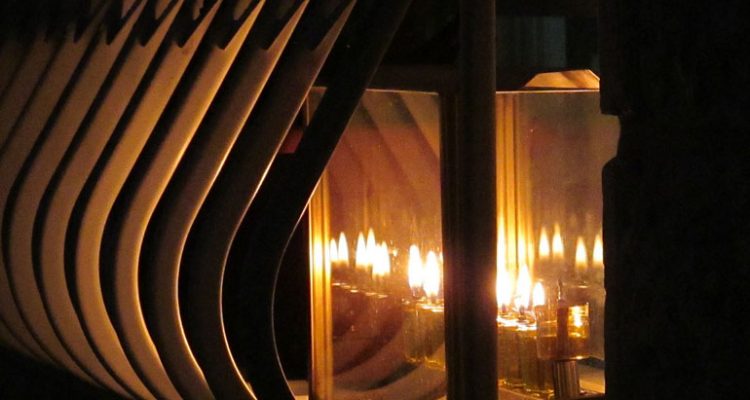 Kislev: The Miracle of Chanukah

For the Baal Shem Tov, the founder of the Chassidic movement, Chanukah was his “favorite” holiday — for Chanukah is the holiday of light, a light that fills the soul and warms the heart.

Although outside it is dark and cold, the radiance of the Chanukah candles penetrates into the depth of the winter night, permeating it with warmth and transforming the darkness itself into a light force.

From where do the Chanukah candles derive their power not merely to dispel darkness, but to transmute it into light?

The first two letters of the word Chanukah spell chen, one of the eight synonyms in Hebrew for beauty. Chen, which literally means “grace” or “favor,” represents that aspect of beauty which expresses itself through the aesthetic of graceful symmetry. The word chen first appears in the Torah in the concluding verse of Parashat Bereishit, the first portion of the book of Genesis. The verse there reads: “And Noah found chen (“favor”) in the eyes of God.” The name Noah is actually the same as chen spelled backwards. By virtue of its first appearing in the Torah as juxtaposed with its “opposite,” we are taught in Kabbalah that chen represents balance and symmetry, particularly that which is comprised of two inverse elements reflecting each other. The opposites that form the graceful symmetry of Chanukah are those of darkness and light, or as referred to in the Aramaic idiom of the Zohar — “transforming chashocha (darkness) into nahora (light),” whose initial letters themselves spell chen.

We can now begin to understand how the Chanukah candles succeed in transforming darkness into light. Reflective symmetry is the result of two inverse elements possessing a hidden reference to each other. By defining themselves in perfect contradistinction to one another, such elements enter into a symmetrical bond which attests to an underlying unity forming their common source. So it is with darkness and light. Just as light itself possesses the potential to blind one with its radiance (thus testifying to the source of “darkness” included within light), so too does darkness hold within it the potential for illumination (the power of the color black to “shine”).

The hidden light which inheres within darkness must be “sparked” into consciousness if it is to transform the opaque realm of Creation into a translucent expanse of Divine light. Herein lies the secret of redemption, expressed in Kabbalah as the process of redeeming those fragments or “sparks” of Divine light which were scattered throughout the universe when the primordial vessels of light fashioned at the dawn of Creation shattered, descending into the lower realms. Parallel to the cosmic restoration of these Divine sparks, there takes place a process here below whereby the lost souls of Israel are aroused to reembrace their people, their land, and their God.

The miracle of Chanukah represents the ability to revive the Divine spark of light which resides hidden within the soul of every Jew, regardless of how oblivious he or others may be to its existence. It is told that in his early years, the Baal Shem Tov walked small Jewish children to and from their local cheder (school). It was his custom to place his holy hand on each child’s heart, and bless him that he grow to be a “warm Jew”(in Yiddish: a varemer yid). Even a heart as cold as stone could not help but absorb the fiery love of God and man, and the burning desire for redemption, which radiated from his touch.

The secret of chen as it relates to Chanukah implies that although Jews may appear to be in total conflict with each other, in truth — in the innermost point of faith, rooted in Jewish being — they are one. In their apparent opposition, they are actually mirroring each other. The opposing natures and positions which emerge from the endless internal dialogue spanning the history of the Jewish people provide the elements out of which the beautiful tapestry of Jewish existence will display itself at the end of days.

The classic example of antagonism suffused with chen is that of the ongoing opposition between the Talmudic schools of Hillel and Shammai. One of their most famous disputes concerns the order by which we light the Chanukah candles. According to the school of Hillel, we begin by lighting one candle on the first night of Chanukah and then continue to add an additional candle on each successive night. The school of Shammai takes the opposite position, stating that one should light all eight candles on the first night and then progressively eliminate one candle each night thereafter, until one is left with one single candle on the eighth and last night.

In this dispute we encounter the ultimate expression of chen symmetry. Although diametrically opposed to each other, both positions have validity. Common practice nowadays dictates that we conduct ourselves in accordance with the opinion of the school of Hillel. However, it is said that in the world to come, the law will be in accord with the school of Shammai. In truth, both positions assert themselves simultaneously, just as the reality of this world and that of the next are not separated in time but rather parallel each other. The difference is one of conscious emphasis. The power of chen inherent in Chanukah enables us to harmonize the radical contradictions which accompany us through time to the threshold of the Messianic era.

Light Unto the Nations: Chanukah, the Tenth ...

What is the secret of the Chanukah lights, which

From Essence to Actualization:...

The following is a summary

The Kabbalistic Promise of Pas...

The Arizal promised that whomever