Shevat: Resources For the Hebrew Month of Shevat

Shevat and the Democratization of Righteousness

Can anyone become a tzadik (righteous individual)? On the one hand, “tzadik” is a title given to very unique individuals. A tzadik is someone who has completely overcome his evil inclination, so much so that he has totally released himself from its clutches, and all that interests him is what is good and pleasant, “The desire of the righteous is only good.” On the other hand, there is a famous verse that states, “Your people are all righteous, they will inherit the land eternally.”

Articles for the 10th of Shevat

YUD SHEVAT, THE 10TH DAY OF THE MONTH OF SHEVAT, MARKS THE PASSING OF THE FRIEDIGER LUBAVITCHER REBBE, RABBI YOSEF YITZCHAK SCHNEERSOHN IN 5710 (1950). A YEAR LATER, ON THE SAME HEBREW DATE, THE REBBE, RABBI MENACHEM MENDEL SCHNEERSOHN RECEIVED HIS FATHER-IN-LAW’S POST AND ASSUMED THE LEADERSHIP OF CHABAD.

SHORTLY BEFORE YUD SHEVAT 5710, THE FRIEDIGER REBBE PUBLISHED A CHASSIDIC TREATISE TITLED “BATI LEGANI” (LIT.: “I HAVE COME TO MY GARDEN”), FOR CHASSIDIM TO BEGIN TO STUDY ON THE VERY DAY OF YUD SHEVAT (WHICH MARKS, AS WELL, THE YARTZEIT OF HIS GRANDMOTHER, THE RABBANIT RIVKAH), WHICH POSTHUMOUSLY BECAME HIS SPIRITUAL WILL FOR OUR GENERATION.

In the Torah, the tree symbolizes both man (“You [the Jewish people] are called ‘man’”)–”for man is the tree of the field”–and the Torah–”It [the Torah] is a tree of life for all that hold onto it.” Both man and the Torah possess all of the four major components of the tree: roots, trunk, branches, fruit.

Trees, Tzadikim, Divine Blessing, and Us

The month of Shevat is the most conducive time for each one of us to manifest his own inner spark of tzadik, by strengthening his conscious connection to the tzadik of the generation. The tree of life, as expressive of the potential for restoring perfection to all reality, appears in Jewish sources as symbolic of both the tzadik, the foundation of the world and the Torah, in particular its inner dimension—the esoteric tradition.

Shevat and the Renewal of the Sefat Emet – Sheva Berachot Shapira

Articles for the 22nd of Shevat

The 22nd of Shevat marks the passing of Rebbetzin Chaya Mushka Schneerson, devoted wife of the Lubavitcher Rebbe. What follows in an excerpt from a class given on the 22nd of Shevat 5757 to women in Rechovot. 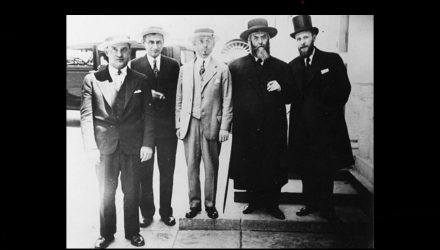 The Rebbe Rayatz: Writings in Exchange for Li...

With true self-sacrifice, the Rebbe Rayatz directs his aide to burn his memoirs and the historical accounts he had written. This self-sacrifice is totally for the sake