Sivan: Resources For the Hebrew Month of Sivan

Strength and Kindness in the Torah

There are two facets to the Torah, both of which are reflected in the festival of Shavuot, the Time of the Giving of our Torah. On the one hand, the Torah is a Torah of loving-kindness, “The Torah begins with acts of kindness and ends with acts of kindness.” On the other hand, the Torah also incorporates a great deal of boldness, authority and force, “There is no boldness other than Torah, as it says, ‘God gives boldness to His people.’"

The Three Tzadikim of Shavu'ot

The Lubavitcher Rebbe taught there are three souls of tzaddikim (“righteous people”) who are directly related to the holiday of Shavuot. Shavuot, the holiday of the giving of the Torah to Israel is obviously the holiday of Moses, who brought the Torah to the People of Israel. Shavuot is also the anniversary of the passing of both King David and the Ba’al Shem Tov (who was a reincarnation of King David).

The Three Essential Adjectives of Torah

It is explained in Chassidut that the Torah is described by means of three essential adjectives: “the Torah of truth,” “the Torah of kindness” and “the Torah of life.” This phenomenon of three specific adjectives for describing Torah parallels a statement by the sages that all matters relating to our Holy Torah appear in groups of three (Talmud Bavli, Shabbat 88a): “Blessed be G-d who gave the three-part Torah (Torah, Prophets, Holy Writings) to the three-fold nation (Priests, Levites, Israelites) in the third month (Sivan) by means of the three (Moses, Aaron and Miriam).”

The verse immediately following the account of the giving of the Ten Commandments to Israel by G-d at Mt. Sinai, which summarizes the experience of that greatest of all days, reads: “And the whole people saw the voices and the torches and the shofar blast and the smoking mountain…” (Exodus 20:15).

A miracle is a revelation of Divine energy, which is liable to merely disperse ineffectively if it is not contained. The vessels that can contain the Divine energy revealed through a miracle are God’s commandments, the mitzvot of the Torah.

Into the fiftieth gate

The forty-nine gates that reveal God’s control over the world manifest in our knowledge of God through our human intellect. However, intellectual knowledge of God is referred to as knowing God from His “back,” as Moses was told, “You shall see My back.” But, the fiftieth gate of understanding, knowing God from His “face,” of which it says, “My face will not be seen,” is above all the powers of our intellect. Knowing God’s “face” is an innermost knowledge that derives from one’s vital essence.

Preparing for the Giving of the Torah

Boaz and Ruth and Shavu’ot 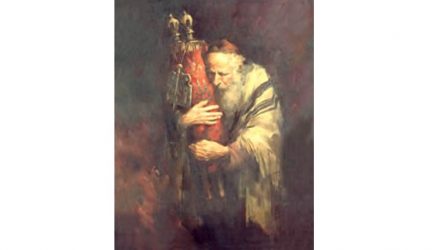 Everyone knows where the Giving of the Torah took place: At Mount Sinai, of course. But where is Mount Sinai? Nobody is exactly sure. Researchers and archeologists

Orders of the Triple Torah

From Rosh Chodesh Sivan, the third month of the

The Secret of Batsheva Part...

What was David’s mistake?  How did David make the