Mathematics in the Torah

Parshashat Tetzaveh is especially connected with parashat Terumah that precedes it since the two of them contain the various commandments given by God to Moses with the purpose of constructing the Tabernacle and initiating its service and the service of the priests in it. The two parashat together are themselves reflected later in the pair of parashot Vayakhel and Pekudei that describe the actual construction of the Tabernacle and the inauguration of Aharon and his sons into the priesthood. It is not surprising therefore that there is a word that appears only twice in the entire Bible and that its two instances are in Terumah and in Tetzaveh. This rare word appears in the following two verses, the first from Terumah, the second from Tetzaveh:

The word is “I will meet with,” and in both verses it is used to describe the manner in which God will reveal Himself over the Ark of the Covenant (in Terumah, to Moses alone, and in Tetzaveh to the Children of Israel, a topic we will explore later on). But, there is a slight difference between how the word is spelled in each instance. In Terumah it is spelled with 7 letters, וְנוֹעַדְתִּי, and in Tetzaveh it is spelled with only 6 letters, וְנֹעַדְתִּי. The pronounciation remains the same as the difference is in the additional letter vav in the first instance.

The value of the 7 letter variant, וְנוֹעַדְתִּי, is 546, which is the product of 7 and 78, which means that the average value of each letter is 78. 78 is also the triangle of 12, meaning the sum of integers from 1 to 12. The value of the second instance, וְנֹעַדְתִּי, which possesses only 6 letters is thus 6 less, or 540. The two instances together – וְנֹעַדְתִּי וְנוֹעַדְתִּי – equal 1086, which is also the value of the four matriarchs Sarah, Rivkah, Rachel, and Leah (שָׂרָה רִבְקָה רָחֵל לֵאָה), suggesting that God’s meeting (with Moses and with the entire people) is in merit of the matriarchs. The average value of the two variants is thus 1086 divided by 2, or 543, which is the value of God’s Name, “I will be that which I will be”[3] (אֶהְיֶה אֹשֶׁר אֶהְיֶה).

Since the two variants together have 13 letters, they can be drawn in the form of the interface number of 3,[4] like so: 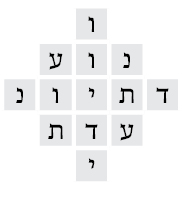 The sum of the 5 letters down the center of the figure – ו ו י ד י – is 36, which is the value of “Leah” (לֵאָה), which means that the sum of the remaining 8 letters is the same as the value of the three remaining matriarchs, Sarah, Rivkah and Rachel (שָׂרָה רִבְקָה רָחֵל). This example illustrates how the figurate form can reveal an internal numerical (and sometimes linguistic) division that cannot be seen otherwise.

The verse from our parashah that contains the word “I will meet with” possesses 28 letters, which can be drawn in the form of the trinagle of 7 (sum of numbers from 1 to 7), like so: 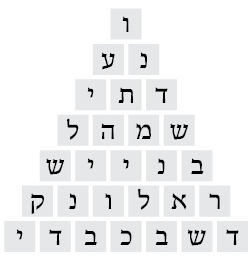 There are various phenomena that can be seen in this form of the verse, which we will return to in a moment.

But, let us also note that the two verses together possess 28 words, which can also be drawn in the form of the triangle of 7, but in this case, with each point being represented by a word, like so, 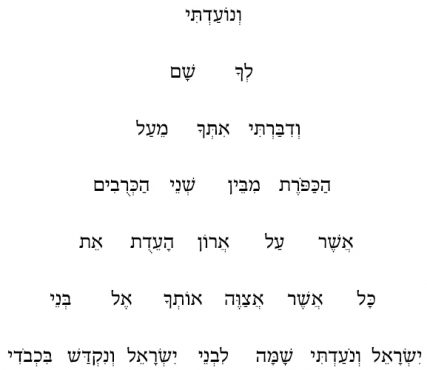 Once again, without getting into the particular phenomena concealed in this format of the two verses, we want to stress how the part is reflected in the whole. The part is the verse from this week’s parashah, which possesses 28 letters, which is reflected in the same form as the whole, the two verses from last week’s and this week’s parashot together.

Let us focus some more on the verse from this week’s parashah, “And there I will meet with the Children of Israel, and it shall be sanctified by My Presence” (וְנֹעַדְתִּי שָׁמָּה לִבְנֵי יִשְׂרָאֵל וְנִקְדַּשׁ בִּכְבֹדִי). The total value of the verse is 2016, or 7 times 288, where 288 (רפח) is the number of sparks of holiness that need to be redeemed and introduced into holiness before every redemption (the process of sanctification that each spark undergoes is alluded to in the verses final two words, “and it shall be sanctified by My Presence”). 2016 is also the product of 14 and 122.

When analyzing the verse from last week’s parashah, Terumah, we find that the words until the liturgical midpoint (marked by the etnachta cantillation mark) are, “There I will meet with you and I will speak to you—from above the cover, from between the two cherubim that are on top of the Ark of the Testament” (וְנוֹעַדְתִּי לְךָ שָׁם וְדִבַּרְתִּי אִתְּךָ מֵעַל הַכַּפֹּרֶת מִבֵּין שְׁנֵי הַכְּרֻבִים אֲשֶׁר עַל־אֲרֹן הָעֵדֻת ). It is quite common to use the liturgical midpoint to focus on on the first or second parts of a verse. In this case, the sum of words in the first part is exactly 4900, making it especially noteworthy. 4900 equals 702. When added to 2016, the value of the verse in this week’s reading, the sum comes to 6916, which is the product of 182 (7 times Havayah [י–הוה], God’s essential Name, as well as “Jacob” [יעקב]) and 38, where 38 is the value of the final word, “by My Presence” (בִּכְבֹדִי).

Now, when we add the letters of these words to the 28 letters of this week’s verse, the total comes to 82 letters, which can then be drawn in the figure of the concatenated triangle of 13, where the three-letter corners have been removed, like so, 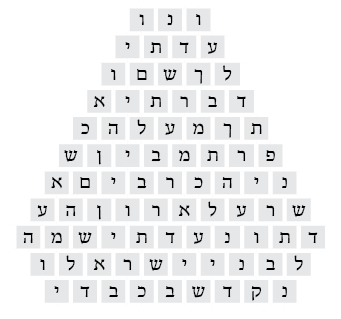 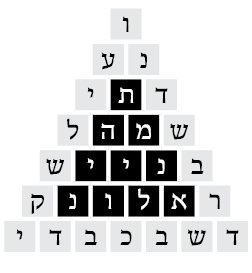 The value of the 10 internal letters is 602, or 7 times 86, where 86 is the value of Elokim (א-להים) and the value of the 18 surrounding letters is 1414 or 7 times 202. Recall that the full verse equals 2016, which is 7 times 288, so by drawing the verse in its triangular form, we have found that 288 divides into 86 and 202. This indeed is a well-known division of 288 in Kabbalah. Particularly, in relation to the Exodus from Egypt, which was the first redemption, it is taught that there of the 288 sparks of holiness in Egypt, 202 where redeemed and elevated to holiness and 86 remain to be redeemed by the Mashiach.

Analyzing the triangle further, we find that the letters in the middle of the sides spell the word for “mind” (שכל), which equals 350, or 7 times 50. 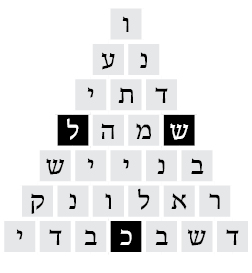 Another interesting way to analyze the triangular form of this week’s verse is to focus on the triangle of 4 (10 letters), which is highlighted like so, 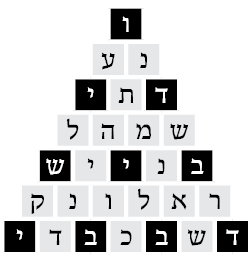 [4]. Interface numbers are given by the function, f[n] = n2 ┴ (n – 1)2. In mathematics they are referred to as “centered-square numbers” and can be found

Mathematics in the Torah: Devarim: 3 Verses ...

Devarim’s first two verses Let’s look at the first three verses of the Penateuch’s fifth book, or chumash, Deuteronomy (or Devarim): Verse 1: These are the words

Q: What can we learn

Q: What is a soul