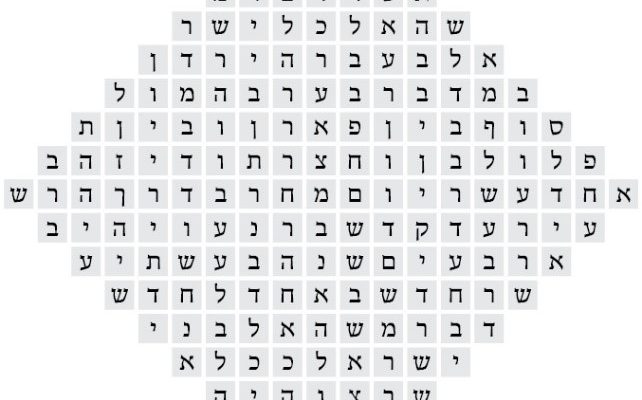 Mathematics in the Torah: Devarim: 3 Verses and 3 Figurate Numbers

Let’s look at the first three verses of the Penateuch’s fifth book, or chumash, Deuteronomy (or Devarim):

Verse 1: These are the words that Moses addressed to all Israel on the other side of the Jordan, through the wilderness, in the Arabah near Suph, between Paran and Tophel, Laban, Hatzeroth, and Di-zahab.[1]

Verses 2 and 3: It is eleven days from Horeb to Kadesh-barne’a by the Mount Seir route. It was in the fortieth year, on the first day of the eleventh month, that Moses addressed the Israelites in accordance with the instructions that God had given him for them.[2]

Normally, the first thing we do when approaching the mathematical dimension of the Torah is to count the number of letters (and words) in a verse or group of verses. In this case, we find that the first verse has 81 letters, while the next 2 verses (verses 2 and 3) have 100 letters. Both 81 and 100 are square numbers. 81 is the square of 9 and 100 is the square of 10. Notice that 81 and 100 are sequential squares.

There are 45 black circles and 36 white circles. 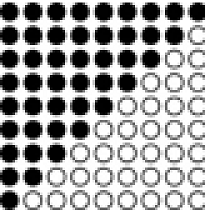 Note that the full figure is a square and that each triangle is a sum of integers, as explained above. This is true for every square number, so we could just write:

You can test it for different numbers to see that it works.

We use the symbol ¨ to designate an interface number (this is our own nomenclature, it is not readily found in other mathematical works).

Now recall that the first verse had 81 or 92 letters and the second and third verses together had 100 letters, which is 102. Since 92 and 102 are sequential square numbers, their sum, 181, is the interface number of 10, or ¨10. How would we draw an interface number as a figure? The most straightforward way is to simply place the smaller square inside the larger—that is where we get the name “interface,” since the squares look like they are interfaced together. For 181, we would draw the following figure: 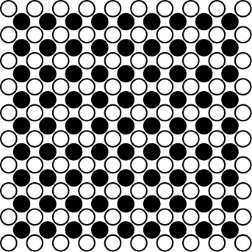 But, by rotating this figure by 45 degrees we get another variation of this figure that actually differentiates between the two squares in another way, as in the following figure. 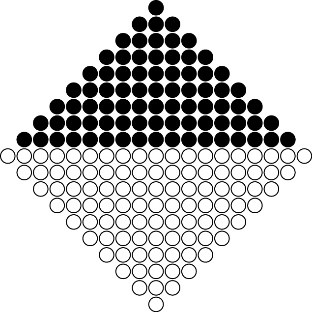 This isomorphic shape is reminiscent of the way that a square number is made up of two triangles, since the two squares are like the two triangular parts of the figure. There are 81 or 92 black circles and 100 or 102 white circles.

The next figure illustrates how the 181 letters of the three verses would be drawn in this last form, 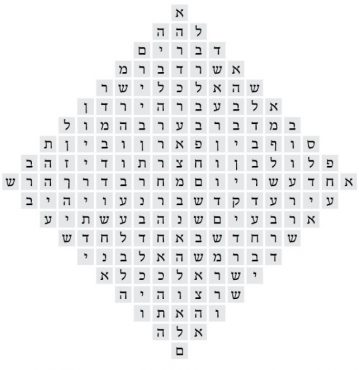 Once the verses are depicted in this way, we can find new phenomena. For example, looking at the letters forming the border of the figure, they are: אהםמרןלתבשבעשיאהוהםאושידשאעאפסבאשאדל and there value is 2678, which is the product of 103 and Havayah, God’s essential Name (י-הוה) whose value is 26. 2678 is also the value of the names of the first 10 generations of mankind, “Adam Seth Enosh Keinan Mahalalel Yered Chanoch Methuselah Lemech Noach“ (אָדָם שֵׁת אֱנוֹשׁ קֵינָן מַהֲלַלְאֵל יֶרֶד חֲנוֹךְ מְתוּשֶׁלַח לֶמֶךְ נֹחַ). In the same vein, 103 is the value of the first and last of these generations, “Adam Noach” (אָדָם נֹחַ).

Focusing on the first verse, we find that it has many phenomena related to the powers of 3.

These are the words that Moses addressed to all Israel on the other side of the Jordan, through the wilderness, in the Arabah near Suph, between Paran and between Tophel, Laban, Hatzeroth, and Di-zahab.

The first word, “These” (אֵלֶּה) has 3 letters. Three is the first power of 3, or 31. The first full phrase, “These are the words” (אֵלֶּה הַדְּבָרִים), has 9 or 32 letters. Until the cantillation sign known as a zakef katan, marking the end of a larger complete phrase, “These are the words that Moses addressed to all Israel” (אֵלֶּה הַדְּבָרִים אֲשֶׁר דִּבֶּר מֹשֶׁה אֶל כָּל יִשְׂרָאֵל), there are 27, or 33 letters. Finally, we have already mentioned that the complete verse has 81, or 34 letters! We might add that the first letter, the alef of “These” (אֵלֶּה) can be seen to represent 30, or a single letter (a further allusion to this is that the numerical value of alef is 1).

The entire verse contains 22 words and its complete value is 5060. But, 5060 is amazingly 10 times the diamond number of 22, or 506. A diamond number is simply two identical triangles placed base to base. Here is what they look like: 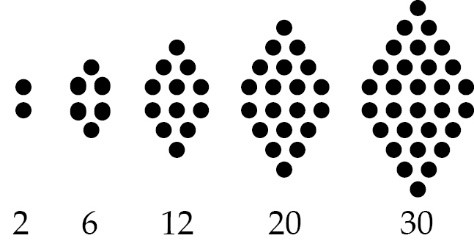 Mathematicians call the diamond numbers, oblong (or promic) numbers (series A002378 in the oeis.org). The function for these numbers is ¸n = 2rn, or in algebraic form:

We define the sign of a verse as the product of its number of words and its number of letters. The first verse has 22 words and 81 letters, so its sign is 1782. This number is referred to in the unit of the first three verses in another way. The sum of the triangular values of the letters in the first and last words, “These…. for them” (אֵלֶּה…. אֲלֵהֶם) is:

One final observation about the first verse, which we saw is intrinsically linked to the number 22 (the number of its words and a factor of its complete value). Let us look at the first and last 22 letters in the verse. The first 22 letters make up the complete first 7 words in the verse, “These are the words that Moses addressed to all” (אֵלֶּה הַדְּבָרִים אֲשֶׁר דִּבֶּר מֹשֶׁה אֶל כָּל). The ratio of 22 to 7 is well-known as the best approximation for pi for two integers smaller than 100. The value of these 7 words is 1430, which is also a multiple of 22, namely 1430 equals 22 times 65, where 65 is the value of God’s Name, Adni (אֲ-דֹנָי). This means that the average value of each letter is Adni (אֲ-דֹנָי).

The final 22 letters make up the complete last 6 words of the verse, “and between Tophel, Laban, Hatzeroth, and Di-zahab” (וּבֵין תֹּפֶל וְלָבָן וַחֲצֵרֹת וְדִי זָהָב). The value of these six words is 1404, which is 54 times Havayah (26). 1404 also equals “Shabbat Shabbat” (שַׁבָּת שַׁבָּת), alluding to the sages’ statement that were the Jewish people to keep two Shabbatot, they would immediately be redeemed. In reference to the first 22 letters, 1404 is exactly 26, or Havayah, less than 1430.