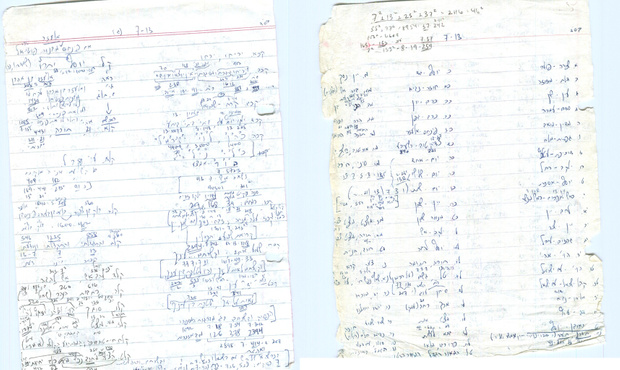 Mathematics in the Torah: Parashat Shemot

Insights into the very real mathematics hidden in the Torah. A PDF of the article is available below. Pictured above are scans of two pages out of Rabbi Ginsburgh's notebooks on 7 and 13, the topic of this week's exploration.

One of the most ubiquitous mathematical findings in the Torah is the special relationship exhibited between the numbers 7 and 13. Over the years, we have found well over a thousand pairs of figures or concepts mentioned in the Torah, whose numerical values display this relationship, where the masculine part of the pair is a multiple of 13 and the feminine part is a multiple of 7.

A beautiful example of this phenomenon can be seen in the opening of the Book of Exodus, known as Shemot (שְׁמוֹת), in Hebrew. The word Shemot means "Names." The Torah relates the episode concerning the two midwives, Shifrah (שִׁפְרָה) and Pu’ah (פּוּעָה) and their quiet rebellion against Pharaoh’s decree that all Hebrew males should be killed upon being born. The value of Shifrah is 585 and the value of Pu’ah is 161. First note the interesting fact that the sum of their two names equals the name of the book in Hebrew, Shemot (שְׁמוֹת), "Names," 746. In relation to 13 and 7, Shifrah is equal to 13 times 45 and Pu’ah is equal to 7 times 23, indicating that of the pair, Shifrah is the more masculine and dominant (since her name is a multiple of 13), while Pu’ah is the more feminine and receptive the two (since her name’s value is a multiple of 7).

The sages identify Shifrah and Pu’ah as either Yocheved (Moses’ mother) and Miriam (his sister) or as Yocheved and her daughter-in-law, Elisheva (the wife of Aharon, Moses’ brother). In either case, Shifrah, the first of the two midwives, is the mother or mother-in-law of Pu'ah, thus making her the relative "male" (giver) of the pair.

If we look more closely at the option of Yocheved (יוֹכֶבֶד), 42, and Elisheva (אֱלִישֶׁבַע), 413, we find that the values of both their names are multiples of 7. 42 is 7 times 6 and 413 is 7 times 59. This fits well with the identification of multiples of the number 7 with the feminine aspect in reality.

The first couple of parashat Shemot

At times, the 7-13 relationship between the factors of the values of two figures or concepts cannot be discovered directly. An additional computational step may be necessary, but this step is consistent across both sides of the pair. A beautiful illustration of such an additional computational step can be found in relation to the most important couple in parashat Shemot, Moshe and Tzipporah. As we recall, after escaping Egypt, Moshe arrived in Midian and there ended up marrying the daughter of Yitro (Jethro), the most famous idolatrous priest of his day who eventually converted and joined the Jewish people in the land of Israel.

Now, the value of Moshe (מֹשֶׁה) is 345, neither a multiple of 7 or 13 and the value of Tzipporah (צִפֹּרָה) is 375, again, neither 7 nor 13 is a factor of this number. However, an important numerical computation is finding a number’s midpoint.[1] Only odd numbers have a midpoint, which can be calculated by adding 1 to the number and dividing by 2. For example, the midpoint of 5 is 3, the midpoint of 11 is 6, etc.[2] We can also ask the reverse question: Given a number n, of which number is n a midpoint. To find the answer we multiply n by 2 and subtract 1. Applying this calculation to Moshe, we find that 345 is the midpoint of 689 and that Tzipporah, 375, is the midpoint of 749.[3]

Indeed, we see that 689 is 13 times 53, the masculine half of the pair associated with Moshe Rabbeinu and 749 is 7 times 107, the feminine half of the pair associated with Tzipporah.[4] In addition, 689 is the value of “the eternal of Israel”[5] (נֶצַח יִשְׂרָאֵל). This phrase is particularly descriptive of Moshe Rabbeinu, who is considered the archetypal soul of the sefirah of victory or eternity (נֶצַח). In a similar vein, 749 is the value of the well-known phrase, “a woman of valor”[6] (אֵשֶׁת חַיִל), a fitting description for any righteous woman, and certainly for Tzipporah, Moshe’s wife.

The tribes and their wives

Among the pairs of concepts or figures in Torah where we would expect to find this relationship between the 7 and 13, are those of couples. Of Jacob’s 12 sons, we know the names of wives of only two: Yosef (Joseph) and Yehudah (Judah). Yosef’s wife is Osnat and Yehudah’s wife is Tamar.[7] Let’s look at these two pairs of husband and wife.

To see the 7-13 relationship between Yehudah and Tamar we need to apply an important textual principle called, “Subtract, Add, and Interpret” (גּוֹרְעִין וּמוֹסִיפִין וְדוֹרְשִׁין).[8] We note that Yehudah is the only name in the entire Tanach in which all four letters of God’s essential Name, Havayah appear in order. The only letter that stands out is the dalet (ד). Now, if we take this letter dalet and add it to Tamar, we are faced with the question of what word is formed? Is this a word that makes sense? Incredibly, we find that one time in the Tanach the name Tamar has a keri and ketiv—a variation between the way a word is written and how it is pronounced. This variation is found in the verses describing the towns built and fortified by king Solomon, “Ba’alath and Tadmor in the desert, near the [populated] land”[9] (וְאֶת בַּעֲלָת וְאֶת תמר [תַּדְמֹר] בַּמִּדְבָּר בָּאָרֶץ). The written form is Tamar (תמר) and the pronunciation is Tadmor (תַּדְמֹר): Tamar with an extra dalet (ד)![10]

Thus, with respect to the two tribes whose wives’ names are mentioned, we find that their names exhibit the 13 to 7 relationship. As noted in the beginning, there are over a thousand such examples in the Torah, exhibiting this surprising mathematical phenomenon.

[2]. Mathematically, one of the profound connections between 7 and 13 is that 7 is the midpoint of 13!

[7]. Judah had another wife that is mentioned, but she is referred to by proper name only as, “the daughter of Shua.”

[8]. In Kabbalah this method of homiletical exegesis is likened to the “secret of the bisection” (סוֹד הַנְּסִירָה), the act by which the Almighty bisected Eve from Adam, as described in the second account of creation. Thus, this method is itself essentially related to the alignment of 13 and 7 to the masculine and the feminine, respectively.

[10]. It is interesting to note that there is further variation in the name of this town between the Tanach and the sages. In the time of the sages, the town of Tadmor was called Tarmod, as in the ruling that Channukah candles can be lit until, “the foot of the Tarmodians exits [the marketplace]” (Shabbat 21b). The town of Tadmor is identified with the ancient city of Palmyra whose name stems from the Hebrew Tamar, meaning “palm.” In the time of the sages, Palmyra had become a wealthy empire extending from the Black Sea to the Red Sea and based on trade, hence the connection to the Tarmodians as merchants in the marketplaces of the Near East.

It is also noteworthy that the main reason for a variation between a word’s written and oral forms stems from issues with diction, but in this case the variation has some other unclear basis. It is also the only time that a dalet is added to a word in this manner (there is one other time in Daniel, but there it is in respect to a word in Aramaic).