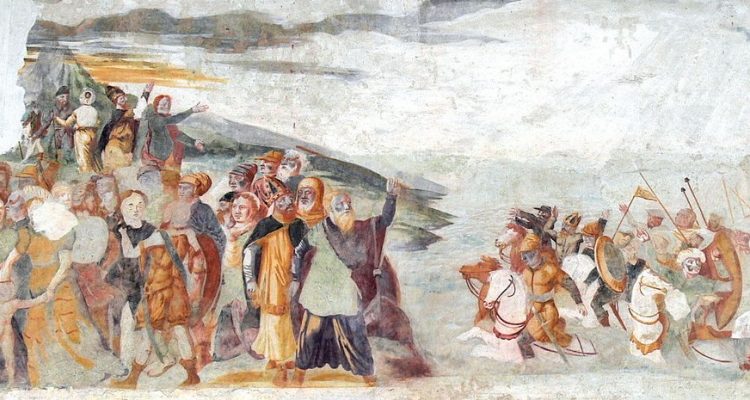 The Kabbalah of Political Opinions

One of the beautiful models of the contemporary political map in Israeli politics goes all the way back to the Jewish People as they stood perplexed at the Red Sea. The Egyptians were closing in from behind and the sea was ominously in front of them. What were they to do? The midrash[1] says that the people divided into four groups:

This final and fourth group was led by Nachshon ben Aminadav, who eventually did jump into the sea; just as the water threatened to drown Nachshon, it miraculously split and the rest is, as they say, history.

Superimposing the past on the present

But history has a way of repeating itself. We can clearly see how all four groups’ arguments are superimposed over the current reality in the land of Israel.

The first camp’s argument is: we don’t stand a chance against the Arabs, the world, you name it. Let’s stop dreaming and agree to painful concessions regarding the land of Israel. Some of them go so far as to entirely despair from Jewish life in the land of Israel and mull over the notion that it might be best to leave the land of Israel and assimilate in America, or perhaps create a “new” Middle-East where Jews and Arabs will be one nation.

The second camp says: We will fight and surely win. The problem is that those who turn around to fight the Egyptians forget the goal in front of them. This is true of a strong nationalist approach. The fight against the enemy becomes the main cause and the eternal and positive values that fill the Jewish people with true, positive content are forgotten. If we do not know why we came here, what will give us the strength to fight?

The third camp says: Let us flee to the desert. We cannot handle the questions of security in Israel. It is too much for us. Instead, let us leave the affairs of running the state to a ruling party; we ourselves will focus on strengthening Jewish religious practice, study Torah and pray to benefit the Nation of Israel and God will help us. This is also a very good, but it is also demonstrates weakness. Instead of dealing with the problems, this camp prefers to live disassociated from the rest of the people in the land of Israel. Once again, the Jewish people’s destiny, to create a Godly kingdom ruled by a pious leader is not included in this approach.

The ideal party, which is not really a party at all, is the fourth camp. Superimposed on our present state of affairs, these are the people who have not forgotten Israel’s destiny.  We are constantly moving toward the redemption in a holistic manner, which includes the wholeness of the Nation, the Torah and the Land of Israel. These are people with strong faith who are willing to act with self-sacrifice.

In Kabbalistic terms: The first three worldviews parallel the lower worlds. The lowest, practical approach parallels the World of Action. The World of Formation is home to the stormy emotion of struggle. The intellectual decision to wait at the sidelines is in the World of Creation.

Above all three stands the Divine World of Emanation. The perception of the World of Emanation is our faith in God’s Divine Providence over us. As a result, we are not afraid to march toward our goal, to bring maximum goodness into the world and to fight our enemies if needed. In this manner, all the obstacles in our path will melt away, with God’s help.