View Cart “The Jewish Heart Pendant – Small” has been added to your cart. 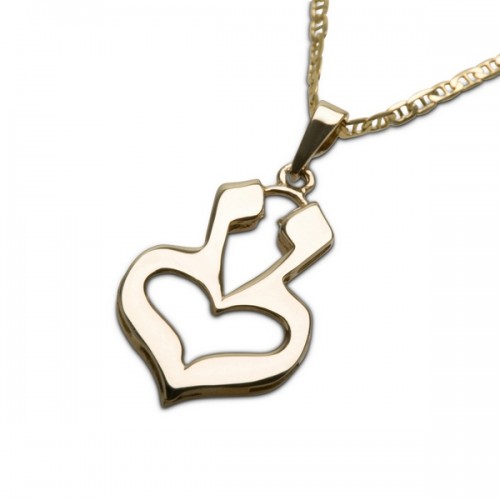 The Mystical Heart is a 14K gold handcrafted rendition of ancient Kabbalistic teachings about the heart. The shape of the heart is formed by two identical lamed’s–a Hebrew letter–facing one another.

The Jewish Heart is a 14K gold handcrafted rendition of ancient Kabbalistic teachings about the heart. The shape of the heart is formed by two identical lamed’s–a Hebrew letter–facing one another.

Ships via Fed Ex direct from the Holy Land of Israel.

It is stated in the Midrash (Otiot d’Rabbi Akiva) that the name of the Hebrew letter lamed stands for Lev Meivin Da’at: “the heart that understands knowledge.” The same idea is expressed in the form of the letter lamed (ל), which depicts the aspiration of the heart to ascend to the highest level of consciousness, the understanding of knowledge. Knowledge (da’at) is the power of the soul which forges the connection between man and God, between man and his fellow, and especially between husband and wife, as it is said at the dawn of creation: “And Adam knew his wife” (Genesis 4:1).

The word for “heart” in Hebrew, lev, is spelled lamed-beit (לב). The letter beit (ב) equals 2. According to the great medieval kabbalist, Rabbi Abraham Abulafia, the word lev itself alludes to its actual form: two (the numerical value of the letter beit) inverted, face-to-face lameds. The two lameds facing one another form an image of the heart, the form drawn by God, the Divine Artist: “God is the artisan of my heart, and my portion forever” (Psalms 33:26).

The Torah, (the Divine knowledge) was given by God to the Jewish People while speaking to them “face-to-face.” Moses escorted God, the cosmic groom, to his marriage to the Jewish People, the cosmic bride. His face, conveying God’s word, the visible reflection of the Divine countenance, was directly parallel to the faces of the people. Both of these faces united, in the form of the Jewish Heart, aspiring upward to the invisible, infinite Divine essence. This union was like the union of a bride and groom, aspiring upwards together to receive the blessing of God, the “third partner” of marriage.

The lamed is composed of a “neck” (a vav, whose upper tip is a yud) situated on a “body” (a chaf). The two “necks” of the two lameds ascend out of the heart (formed by the two “bodies” of the lameds) as do the two major blood vessels, which channel the life-force from the heart to the brain and from the brain to the heart. The two yuds at the tops of the lameds signify the two brains (i.e. the right and left cerebral lobes) of chochmah (“wisdom” and insight) and binah (“understanding” and integration). In addition, these two yuds allude to the two eyes, the two “antennae” of the heart, as it is said: “My heart has seen much wisdom and knowledge” (Ecclesiastes 1:16).

You can also view here a two-minute video clip of Dinah Abrahamson, OBM, explaining the Jewish Heart during an interview with Oprah Winfrey: